How does MTOM work?

MTOM is the W3C Message Transmission Optimization Mechanism, a method of efficiently sending binary data to and from web services.

How does it work in general?

If you put Wireshark (or enabled System.Net Logging) on the non-MTOM enabled service, you should see the SOAP requests with the binary data encoded as BASE64. Sending it as BASE64 increases the size of the binary data but (I assume) makes it more interoperable.

With MTOM, the SOAP messages are sent as MIME messages with the BASE64 encoding being replaced with a placeholder. The binary data is then placed between delimiters (which happens for each piece of binary data), and then placed at the end of the SOAP request. The binary data is then sent unencoded. IIRC, MTOM also determines whether sending it as a MIME message will increase the size of the SOAP call and if doesn't provide a saving, it will send it as a normal SOAP message.

This provides an example of what the message sent over the wire looks like.

It all begins with the fact that SOAP is XML. And when you send anything other than text, for instance, an image - it has to be converted into a datatype that an XML processor can understand.

Without MTOM, your image will be converted to base64Binary and placed smack in the middle of your SOAP envelope. This conversion process makes the data fat. 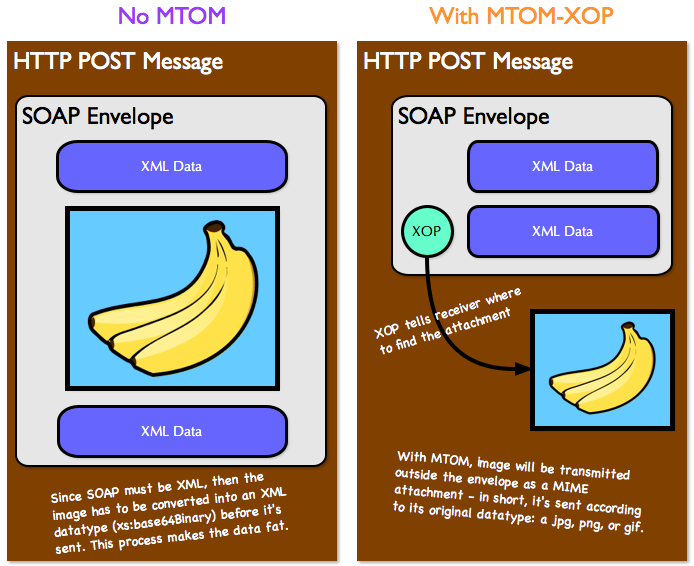 With MTOM, the image will be transmitted outside the envelope as a MIME attachment - in short, it's sent according to its original datatype: a jpg, png, or gif. Of course it's still transmitted as binary data, but this time, there's no XML-related conversion, avoiding the computational overhead. XOP comes into the picture as it's the one that gives the location of the externalized image.

There are a few factors that other answers don't mention. One might think why MTOM is not used as default since it's "faster" than Text message encoding (Base64). It's because MTOM is not faster always. MTOM should only be used on large message transfers because it comes with an overhead. For small size of messages, MTOM's performance will be worse than Text message encoding (Base64).

If MTOM is used for large messages, it's faster than Base64 since it uses raw binary for data transfer. To understand that, one should understand how Base64 works.

Not the answer you're looking for? Browse other questions tagged w3c mtom or ask your own question.

5
Stream MTOM Web Services in Spring Web Services Framework
1
Using MTOM on Mono
9
How does MTOM work + sample code
3
MTOM Request / Non-MTOM Response
3
Is it possible to use MTOM in reponse of CXF RESTful Web Service
17
What's the difference between MTOM and the attachment features provided by SAAJ?
1
Does MTOM needed to be specified for both the client and server code
0
How to detect in Java if SOAP message is MTOM
1
How to parse MTOM soap response in c#