I am thinking about it and this is what I came up with:

Let's see this code below:

A request comes in, and JS engine starts executing the code above step by step. The first two calls are sync calls. But when it comes to setTimeout method, it becomes an async execution. But JS immediately returns from it and continue executing, which is called Non-Blocking or Async. And it continues working on other etc.

The results of this execution is the following:

So basically the second setTimeout got finished first and its callback function gets executed earlier than the first one and that makes sense.

We are talking about single-threaded application here. JS Engine keeps executing this and unless it finishes the first request, it won't go to second one. But the good thing is that it won't wait for blocking operations like setTimeout to resolve so it will be faster because it accepts the new incoming requests.

But my questions arises around the following items:

#1: If we are talking about a single-threaded application, then what mechanism processes setTimeouts while the JS engine accepts more requests and executes them? How does the single thread continue working on other requests? What works on setTimeout while other requests keep coming in and get executed.

#2: If these setTimeout functions get executed behind the scenes while more requests are coming in and being executed, what carries out the async executions behind the scenes? What is this thing that we talk about called the EventLoop?

#3: But shouldn't the whole method be put in the EventLoop so that the whole thing gets executed and the callback method gets called? This is what I understand when talking about callback functions:

But in this case, how does the JS Engine know if it is an async function so that it can put the callback in the EventLoop? Perhaps something like the async keyword in C# or some sort of an attribute which indicates the method JS Engine will take on is an async method and should be treated accordingly.

#4: But an article says quite contrary to what I was guessing on how things might be working:

#5: And there is this image here which might be helpful but the first explanation in the image is saying exactly the same thing mentioned in question number 4: 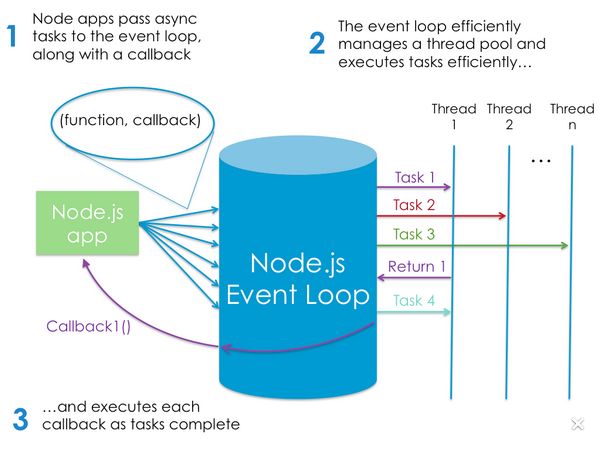 So my question here is to get some clarifications about the items listed above?

1: If we are talking about a single-threaded application, then what processes setTimeouts while JS engine accepts more requests and executes them? Isn't that single thread will continue working on other requests? Then who is going to keep working on setTimeout while other requests keep coming and get executed.

There's only 1 thread in the node process that will actually execute your program's JavaScript. However, within node itself, there are actually several threads handling operation of the event loop mechanism, and this includes a pool of IO threads and a handful of others. The key is the number of these threads does not correspond to the number of concurrent connections being handled like they would in a thread-per-connection concurrency model.

Now about "executing setTimeouts", when you invoke setTimeout, all node does is basically update a data structure of functions to be executed at a time in the future. It basically has a bunch of queues of stuff that needs doing and every "tick" of the event loop it selects one, removes it from the queue, and runs it.

A key thing to understand is that node relies on the OS for most of the heavy lifting. So incoming network requests are actually tracked by the OS itself and when node is ready to handle one it just uses a system call to ask the OS for a network request with data ready to be processed. So much of the IO "work" node does is either "Hey OS, got a network connection with data ready to read?" or "Hey OS, any of my outstanding filesystem calls have data ready?". Based upon its internal algorithm and event loop engine design, node will select one "tick" of JavaScript to execute, run it, then repeat the process all over again. That's what is meant by the event loop. Node is basically at all times determining "what's the next little bit of JavaScript I should run?", then running it. This factors in which IO the OS has completed, and things that have been queued up in JavaScript via calls to setTimeout or process.nextTick.

2: If these setTimeout will get executed behind the scenes while more requests are coming and in and being executed, the thing carry out the async executions behind the scenes is that the one we are talking about EventLoop?

3: How can JS Engine know if it is an async function so that it can put it in the EventLoop?

There is a fixed set of functions in node core that are async because they make system calls and node knows which these are because they have to call the OS or C++. Basically all network and filesystem IO as well as child process interactions will be asynchronous and the ONLY way JavaScript can get node to run something asynchronously is by invoking one of the async functions provided by the node core library. Even if you are using an npm package that defines it's own API, in order to yield the event loop, eventually that npm package's code will call one of node core's async functions and that's when node knows the tick is complete and it can start the event loop algorithm again.

Yes, this is true, but it's misleading. The key thing is the normal pattern is:

So yes, you could totally block the event loop by just counting Fibonacci numbers synchronously all in memory all in the same tick, and yes that would totally freeze up your program. It's cooperative concurrency. Every tick of JavaScript must yield the event loop within some reasonable amount of time or the overall architecture fails.

There is a fantastic video tutorial by Philip Roberts, which explains javascript event loop in the most simplistic and conceptual way. Every javascript developer should have a look.

Except for background workers, but these complicate the scenario...

So, all your js code run in the same thread, and there's no possibility that you get two different portions of your js code to run concurrently (so, you get not concurrency nigthmare to manage).

The js code that is executing is the last code that the host process picked up from the event loop. In your code you can basically do two things: run synchronous instructions, and schedule functions to be executed in future, when some events happens.

Here is my mental representation (beware: it's just that, I don't know the browser implementation details!) of your example code:

While your code is running, another thread in the host process keep track of all system events that are occurring (clicks on UI, files read, networks packets received etc.)

When your code completes, it is removed from the event loop, and the host process return to checking it, to see if there are more code to run. The event loop contains two event handler more: one to be executed now (the justNow function), and another within a second (the inAWhile function).

The host process now try to match all events happened to see if there handlers registered for them. It found that the event that justNow is waiting for has happened, so it start to run its code. When justNow function exit, it check the event loop another time, searhcing for handlers on events. Supposing that 1 s has passed, it run the inAWhile function, and so on....

Not the answer you're looking for? Browse other questions tagged javascript multithreading node.js asynchronous event-loop or ask your own question.

0
What goes into the event loop in Javascript?
0
How do Javascript Asynchronous API request's get handled by node.js?
1
why is the async method not executing sequentially?
0
How browser api handles multiple asynchronous functions like setTimeOuts?
0
if nodejs is single thread who handle the callback functions
1
how javascript identifies the async functions
90
What exactly is a Node.js event loop tick?
18
Single Threaded Event Loop vs Multi Threaded Non Blocking Worker in Node.JS
14
I know that callback function runs asynchronously, but why?
23
How are the Event Loop, Callback Queue, and Javascript’s single thread connected?
See more linked questions

5175
What is the most efficient way to deep clone an object in JavaScript?
3143
How do I loop through or enumerate a JavaScript object?
5078
What's the difference between using “let” and “var”?
7820
What does “use strict” do in JavaScript, and what is the reasoning behind it?
3073
event.preventDefault() vs. return false
3424
Loop through an array in JavaScript
2016
C++11 introduced a standardized memory model. What does it mean? And how is it going to affect C++ programming?
5909
How do I return the response from an asynchronous call?
3874
What's the difference between tilde(~) and caret(^) in package.json?