How do you maintain development code and production code? [closed]

Ask Question
Asked 13 years, 3 months ago
Active 2 years ago
Viewed 53k times
142
Closed. This question is opinion-based. It is not currently accepting answers.

How do you guys maintain your development code and production code?

These days, the question would be seen in a context using Git, and 10 years of using that distributed development workflow (collaborating mainly through GitHub) shows the general best practices:

That kind of workflow (where you don't merge dev to master, but where you merge only feature branch to dev, then if selected, to master, in order to be able to drop easily feature branches not ready for the next release) is implemented in the Git repo itself, with the gitworkflow (one word, illustrated here).
See more at rocketraman/gitworkflow. The history of doing this vs Trunk-Based-Development is noted in the comments and discussions of this article by Adam Dymitruk. 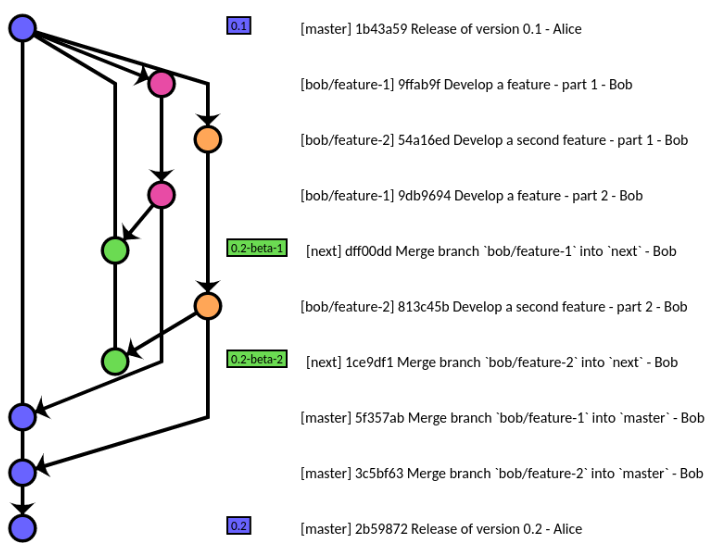 Note: in that distributed workflow, you can commit whenever you want and push to a personal branch some WIP (Work In Progress) without issue: you will be able to reorganize (git rebase) your commits before making them part of a feature branch.

It all depends of the sequential nature of your release management

First, is everything in your trunk really for the next release? You might find out that some of the currently developed functions are:

In this case, trunk should contain any current development efforts, but a release branch defined early before the next release can serve as consolidation branch in which only the appropriate code (validated for the next release) is merged, then fixed during the homologation phase, and finally frozen as it goes into production.

When it comes to production code, you also need to manage your patch branches, while keeping in mind that:

When it comes to dev branch, you can have one trunk, unless you have other development efforts you need to make in parallel like:

Now, if your development-release cycle is very sequential, you can just go as the other answers suggest: one trunk and several release branches. That works for small projects where all the development is sure to go into the next release, and can just be frozen and serve as a starting point for release branch, where patches can take place. That is the nominal process, but as soon as you have a more complex project... it is not enough anymore.

until the project nears completion, or we are creating a milestone version (eg. product demo, presentation version), then we (regularly) branch off our current development branch into the:

The two-part process with a development and a stable (release) branch makes life a lot easier for us, and i don't believe we could improve any part of it by introducing more branches. Each branch also has it's own build process, meaning every couple minutes a new build process is spawned and so after a code checkin we have a new executable of all build versions and branches within about half an hour.

Occassionally we also have branches for a single developer working on a new and unproved technology, or creating a proof of concept. But generally it's only done if the changes affects many parts of the codebase. This happens in average every 3-4 months and such a branch is usually reintegrated (or scrapped) within a month or two.

Generally i don't like the idea of every developer working in his own branch, because you "skip go and move directly to integration hell". I would strongly advise against it. If you have a common codebase, you should all work in it together. This makes developers more wary about their checkins, and with experience every coder knows which changes are potentially breaking the build and so testing is more rigorous in such cases.

On the check-in early question:

If you require only PERFECT CODE to be checked in, then actually nothing should get checked in. No code is perfect, and for the QA to verify and test it, it needs to be in the development branch so a new executable can be built.

For us that means once a feature is complete and tested by the developer it is checked in. It may even be checked in if there are known (non-fatal) bugs, but in that case the people who would be affected by the bug are usually informed. Incomplete and work-in-progress code can also be checked in but only if it doesn't cause any obvious negative effects, like crashes or breaking existing functionality.

Every now and then an unavoidable combined code & data checkin will make the program unusable until the new code has been built. The very least we do is to add a "WAIT FOR BUILD" in the check-in comment and/or send out an e-mail.

For what it's worth, this is how we do it.

Most development is performed in trunk, although experimental features or things that might break the system significantly tend to get their own branch. This works out pretty well as it means every developer always has the latest version of everything in their working copy.

It does mean that it's important to keep trunk in vaguely working order, as it's perfectly possible to completely break it. In practice that doesn't happen often, and is rarely a significant problem.

For a production release, we branch trunk, stop adding new features, and work on bugfixing and testing the branch (regularly merging back into trunk) until it's ready for release. At which point we do a final merge into trunk to make sure everything is in there, and then release.

Maintenance can then be performed on the release branch as necessary, and those fixes can be easily merged back into trunk.

I don't claim this to be a perfect system (and it still has some holes - I don't think our release management is a tight enough process yet), but it works well enough.

Why no one still mention this? A successful Git branching model.

It's for me the ultimate branching model!

If you're project is small, don't use all the time all the different branches (perhaps you could skip feature branches for small features). But otherwise, it's the way to do it! 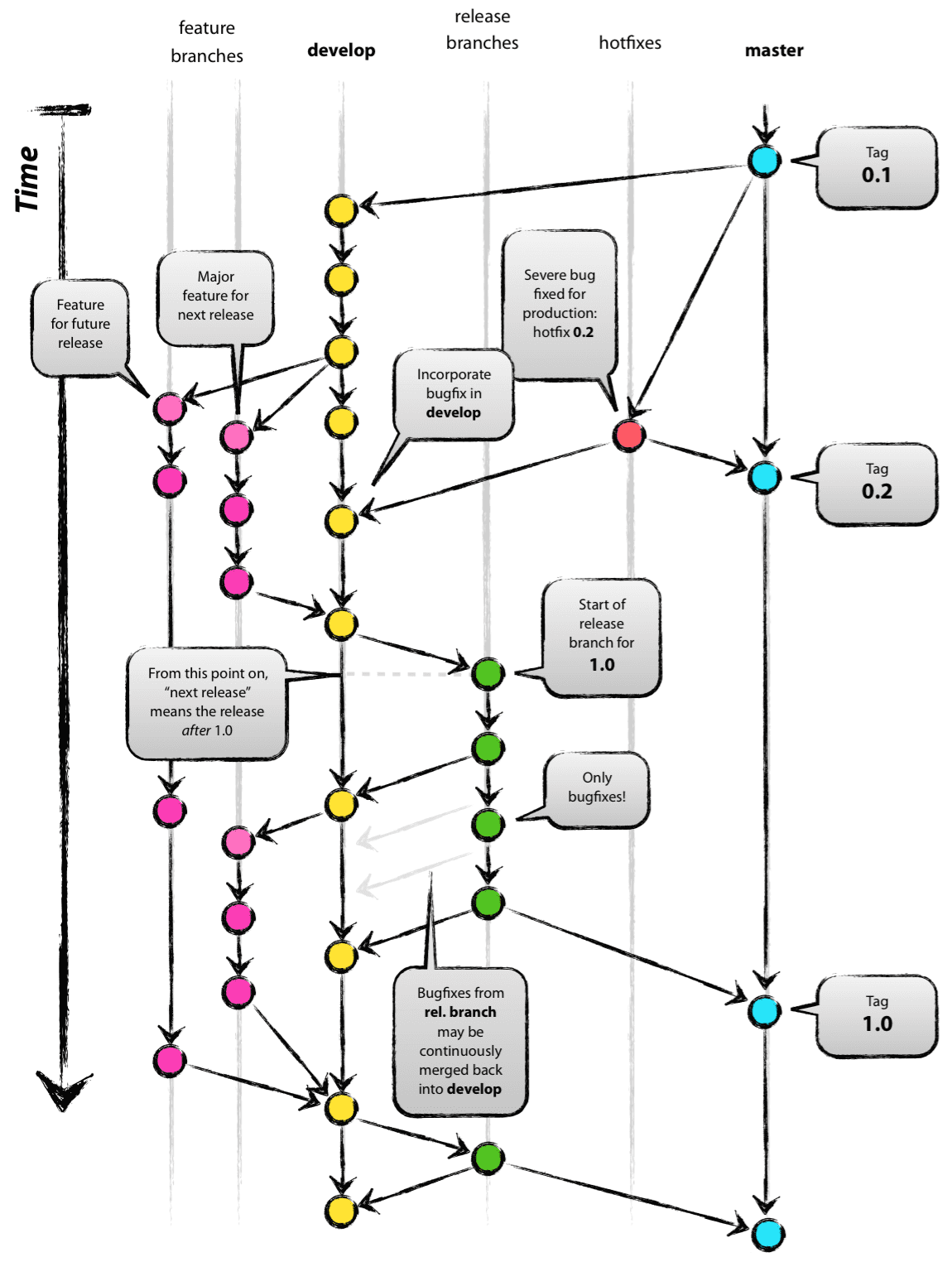 There doesn't need to be a "commit only perfect code" rule - anything that the developer misses should get picked up in four places: the code review, branch testing, regression testing, final QA testing.

It's the "Branch-by purpose model" (figure 3 in The importance of branching models /!\ pdf)

We solve this problem by completely separating the production code (the main trunk) from the development code (where every developer has his own branch).

No code is allowed into production code before it has been thoroughly checked (by QA and code reviewers).

This way there is no confusion about which code works, it is always the main branch.

Oh yes - one other thing - we keep non-production code (i.e that which will NEVER be released - e.g. tool scripts, testing utilities) in cvs HEAD. Usually it needs to be clearly marked so nobody "accidentally" releases it.

We develop on trunk wich is then branched every two weeks and put into production. Only critical bugs are fixed in branch, the rest can wait another two weeks.

For trunk the only rule is that a commit shouldn't break anything. To manage wip-code and untested code we just add appropriate if statments to make it easy to toggle on and off.

Basically it whould be possible to branch trunk at any time and put it in production.

I use git and I have 2 branches: master and maint

Each project, or in some cases other unit, has its own branch which is branched from release.

Changes get committed, by the developers on the project, into their project's own branch. Periodically, release is merged back into a development branch.

The process is basically OK until an issue is discovered after a merge has been done. If a WP gets "stuck" after it's been merged, it holds up everything after it until it's fixed (we can't do another release until the stuck one is released).

It's also somewhat flexible - a very trivial change could happen directly on the release branch if it was being released on a very short time scale (like 1-2 days or so).

If a change was put directly on to production for some reason (a critical customer-affecting production issue which required an immediate code change to fix), those changes would be put back in BRANCH_RELEASE. That hardly ever happens.

It depends on the project. Our web code is checked in pretty consistently, while our application code is only checked in if it compiles. I've noticed that this is pretty similar to how we release things. Web stuff goes up whenever it can while applications hit a hard deadline. I haven't seen a loss of quality in either method though.

Not the answer you're looking for? Browse other questions tagged deployment version-control continuous-integration project-management branching-and-merging or ask your own question.

656
Why does git perform fast-forward merges by default?
111
When should you branch?
385
What Git branching models work for you?
51
Describe your workflow of using version control (VCS or DVCS)
21
Sell me distributed revision control
26
What's the difference between SVN and Git for merging?
10
Six sigma quality management and software development
12
SVN: Release branch headaches, how to merge in website revisions as and when cleared to go live?
4
Forbid developer to commit code because of making weekly build
17
Integration stream vs integration view in ClearCase
See more linked questions

496
How do you get git to always pull from a specific branch?
2683
How to change the author and committer name and e-mail of multiple commits in Git?
337
How to manage local vs production settings in Django?
18838
How do I delete a Git branch locally and remotely?
2
Two approaches to Version Control (TFS): Need advice
7
How to setup SVN repo for emergency fixes?
2
SVN structure for deploying features and fixes to test and production in any order
0
VSTS: Branch and Merge Best approach for Development - QA - Production
0
Advice on git release management & confusion