I am trying to understand how the whole ecosystem of iOS works.
Until now, I could find an answer for most of my question (and trust me, there have been a lots of them), but for this one, there seems to be no clear answer yet.

I think there are three key items you need to understand regarding project structure: Targets, projects, and workspaces. Targets specify in detail how a product/binary (i.e., an application or library) is built. They include build settings, such as compiler and linker flags, and they define which files (source code and resources) actually belong to a product. When you build/run, you always select one specific target.

It is likely that you have a few targets that share code and resources. These different targets can be slightly different versions of an app (iPad/iPhone, different brandings,…) or test cases that naturally need to access the same source files as the app. All these related targets can be grouped in a project. While the project contains the files from all its targets, each target picks its own subset of relevant files. The same goes for build settings: You can define default project-wide settings in the project, but if one of your targets needs different settings, you can always override them there:

Shared project settings that all targets inherit, unless they override it

In Xcode, you always open projects (or workspaces, but not targets), and all the targets it contains can be built/run, but there’s no way/definition of building a project, so every project needs at least one target in order to be more than just a collection of files and settings.

Select one of the project’s targets to run

In a lot of cases, projects are all you need. If you have a dependency that you build from source, you can embed it as a subproject. Subprojects can be opened separately or within their super project.

If you add one of the subproject’s targets to the super project’s dependencies, the subproject will be automatically built unless it has remained unchanged. The advantage here is that you can edit files from both your project and your dependencies in the same Xcode window, and when you build/run, you can select from the project’s and its subprojects’ targets: 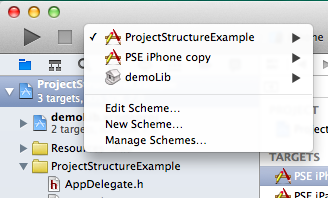 If, however, your library (the subproject) is used by a variety of other projects (or their targets, to be precise), it makes sense to put it on the same hierarchy level – that’s what workspaces are for. Workspaces contain and manage projects, and all the projects it includes directly (i.e., not their subprojects) are on the same level and their targets can depend on each other (projects’ targets can depend on subprojects’ targets, but not vice versa). 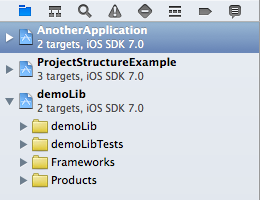 In this example, both apps (AnotherApplication / ProjectStructureExample) can reference the demoLib project’s targets. This would also be possible by including the demoLib project in both other projects as a subproject (which is a reference only, so no duplication necessary), but if you have lots of cross-dependencies, workspaces make more sense. If you open a workspace, you can choose from all projects’ targets when building/running. 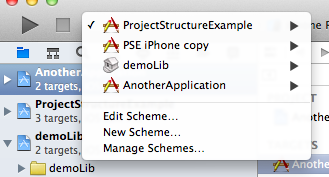 You can still open your project files separately, but it is likely their targets won’t build because Xcode cannot resolve the dependencies unless you open the workspace file. Workspaces give you the same benefit as subprojects: Once a dependency changes, Xcode will rebuild it to make sure it’s up-to-date (although I have had some issues with that, it doesn’t seem to work reliably).

Your questions in a nutshell:

1) Projects contain files (code/resouces), settings, and targets that build products from those files and settings. Workspaces contain projects which can reference each other.

2) Both are responsible for structuring your overall project, but on different levels.

3) I think projects are sufficient in most cases. Don’t use workspaces unless there’s a specific reason. Plus, you can always embed your project in a workspace later.

4) I think that’s what the above text is for…

There’s one remark for 3): CocoaPods, which automatically handles 3rd party libraries for you, uses workspaces. Therefore, you have to use them, too, when you use CocoaPods (which a lot of people do).

A workspace is a collection of projects. It's useful to organize your projects when there's correlation between them (e.g.: Project A includes a library, that is provided as a project itself as project B. When you build the workspace project B is compiled and linked in project A).
It's common to use a workspace in the popular CocoaPods. When you install your pods, they are placed inside a workspace, that holds your project and the pod libraries.

Workspace is a set of projects

You choice should depends on a type of your project. For example if your project relies on CocoaPods dependency manager it creates a workspace.

But when you Show Package Contents with .xcworkspace file, you will find the contents.xcworkspacedata file.

pay attention to this line:

The .xcworkspace file has reference with the .xcodeproj file.

0
XCode 7.3 - Workspace usage
276
Xcode: What is a target and scheme in plain language?
31
Xcode 10 Command PhaseScriptExecution failed with a nonzero exit code (EXPANDED_CODE_SIGN_IDENTITY: unbound variable)
29
Multiple apps from one code base - multiple projects or targets in Xcode?
9
How do I fix Cannot find 'FirebaseApp' in scope?
21
How does Xcode find implicit target dependencies?
17
How does CocoaPods work
5
No such module 'Capacitor' in AppDelegate.swift
12
Xcode project inside project
7
framework not found FirebaseCore
See more linked questions

944
Git ignore file for Xcode projects
1465
How can I "add existing frameworks" in Xcode 4?
1365
How can I disable ARC for a single file in a project?
696
Version vs build in Xcode
980
How to download Xcode DMG or XIP file?
931
xcode-select active developer directory error
787
Xcode process launch failed: Security
902
Xcode error "Could not find Developer Disk Image"
658
How do I completely rename an Xcode project (i.e. inclusive of folders)?
957
Xcode 10 Error: Multiple commands produce