I'm having trouble with a cross-sheet reference within the same file.

On the second tab named "Disclosures & Identification," there is a set of merged cells at D5:G5 which hold text.

On the first tab, there is a reference to that cell. The formula being used is "='Disclosures & Identification'!D5. Instead of copying the text from the second tab's field, the formula just appears in the cell.

I have tried renaming the tab (in case the & was the problem); I have tried using the entire set of merged cells in the reference (d5:g5); I have saved the file under a new name and updated to Office 2007 format (old version was 2003, but that should have worked anyway); and I have done what I consider an appropriate amount of searching for the answer (with no luck). Does anyone have an idea as to why this might not be working? 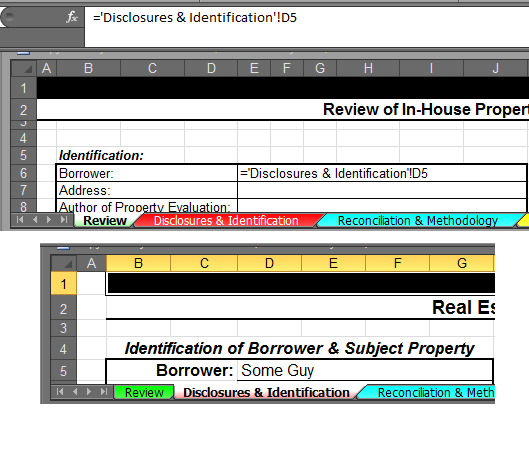 There are 2 possible things:

1992
How do I create an Excel (.XLS and .XLSX) file in C# without installing Microsoft Office?
226
Return empty cell from formula in Excel
0
Reference cells in another sheet using text in current sheet
1
Sheet shows formula instead of result while displaying content of one sheet to another
0
Excel: Name sheet tab from cell value in another sheet
0
How to reference a cell in sheet using the sheetname written in cell
1
Find the dirty(edited) cell/cells from excel sheet using Excel JavaScript API