I have an assignment to use Java and C with MySQL database and compare the results and give reasons as to why such result.

The reason that I thought of is that may be the ODBC drivers load much faster than JDBC but the access speed of JDBC is better than ODBC, hence, such results. However, I am not able to find such reasoning anywhere.

Statements presented by mathworks website, these appear to be generally applicable.

Deciding Between ODBC and JDBC Drivers

Use native ODBC for:

The following points may help:

Flexibility: - ODBC is a windows-specific technology - JDBC is specific to Java, and is therefore supported on whatever OS supports Java

Power : you can do everything with JDBC that you can do with ODBC, on any platform.

API: JDBC API is a natural Java Interface and is built on ODBC, and therefore JDBC retains some of the basic feature of ODBC

Are you sure you are comparing drivers and not whole environments?

I see that for ODBC you use C program. Try ODBC driver with the same program you use to test JDBC but now use JDBC-ODBC bridge (I often use Jython for such things). Of course bridge adds some additional time. Also remember that JVM uses JIT -- the longer your application works the better performance.

Performance is important but for me much more important is stability of drivers. I had some problems with various ODBC drivers and now I prefer JDBC drivers. But even ODBC drivers can work with high-load multi-threaded servers for many months.

I always find these types of discussions about ODBC vs JDBC performance a bit off the mark, not unlike the discussions around JPA vs Hibernate.

A C++ app using an ODBC driver written in C will likely be lightning fast for the small portion of the database interaction taking place. Similarly, a Java program connecting to a database using a vendor's driver which has been optimized for their particular database will be pretty darn fast as well.

But looking at a request-response cycle with a database, the network latency involved in making the request is significantly greater than the overhead of the API. Similarly, the time it takes to search a database or update a record or hold a transaction alive will be orders of magnitude more significant that any efficiency one would garner from choosing ODBC over JDBC.

Use the driver recommended by the vendor given the language you are developing with. And leave the performance issues to the database admins and SQL developers to solve. This isn't where you're going to resolve your database bottlenecks.

The point of the assignment was to introduce you to a real application example that compares the performance characteristics of a pre-compiled language C to a just-in-time (JIT) interpreted^ language Java.

The important distinction here is pre-compiled vs JIT. The difference is how close the code gets to machine code at build-time vs run-time. C gets closer at build-time ( for the most part, ignoring recent advances in heuristic compilation in Java).

This assignment scenario adds in the realistic complication of database data retrieval, which partly serves to increase the numbers so you have something to work with, but mostly to accentuate that the program time consists of fixed (start up) and variable (in this case I/O bound) phases. It could also have been a CPU-bound example, the same pattern would have emerged.

It starts to be easier to see if you graph the values in a chart. 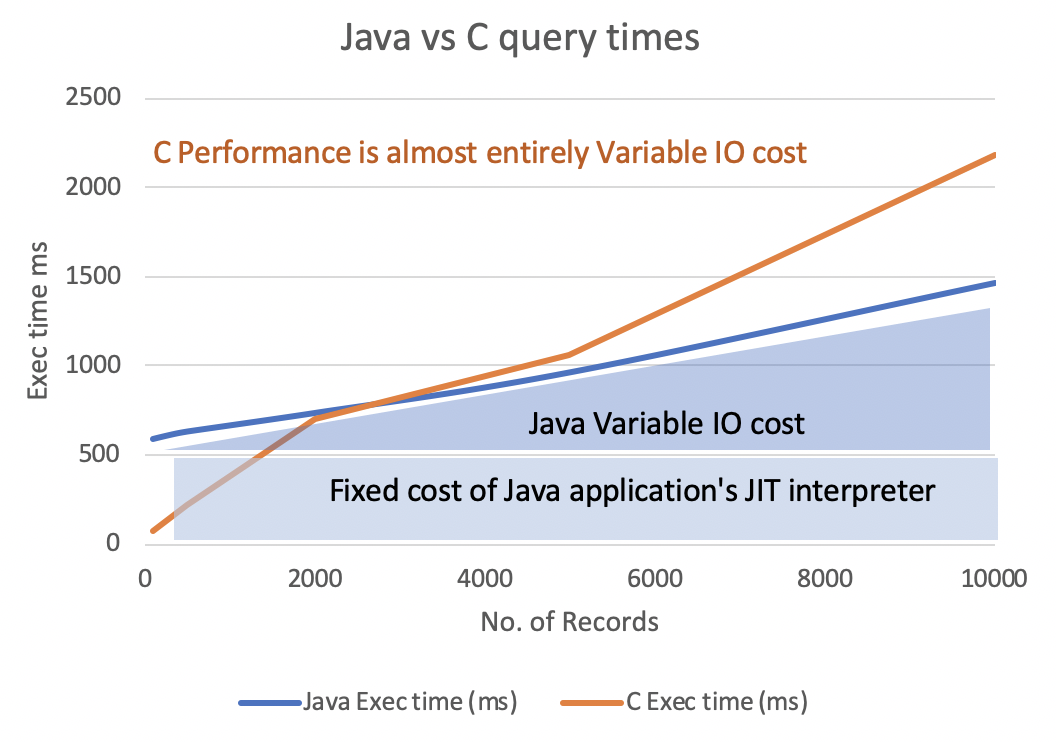 Look at the slope of the two lines. I think it's an anomaly that in your numbers the C program is slower over 4000+ records, but that's not important and should not distract from the core point of the example.

The C app startup time is negligible so can be effectively ignored.

The Java app startup time, on the other hand, is around 500ms. It is the JIT compiler interpreting the Java bytecode on the Java Virtual Machine (JVM); it's a fixed start-up cost that you pay for each run of the code no matter how much data you retrieve from the database.

You can consider that 500ms to be the real origin of your data access times, and see that the program grows linearly from that 500ms point.

Not the answer you're looking for? Browse other questions tagged java c database jdbc odbc or ask your own question.

320
Connection pooling options with JDBC: DBCP vs C3P0
3124
Improve INSERT-per-second performance of SQLite
413
How to get the insert ID in JDBC?
4
can I see all SQL statements sent over an ODBC connection?
336
To prevent a memory leak, the JDBC Driver has been forcibly unregistered
280
Must JDBC Resultsets and Statements be closed separately although the Connection is closed afterwards?
116
Manipulating an Access database from Java without ODBC
436
MySQL JDBC Driver 5.1.33 - Time Zone Issue
0
Redshift JDBC vs ODBC drivers performance