However, I need something more! An IP address could be very easily spoofed. 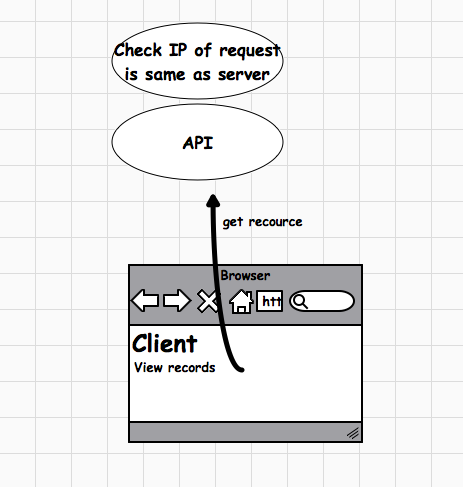 Scenario: My API (TastyPie) and Client App (in javascript) are on the same server/site/domain. My users don't login. I want to consume my API in my javascript client side.

Question: How can I make sure (authentication) that my AJAX requests are originating from the same server?

I'm using Tatypie. I need to authentication that the requests from the client are being made on the same server/domain etc. I cannot use 'logged in sessions' as my users don't login.

I have looked at private keys and generating a signature but they can viewed in the javascript making that method insecure. If I do it in a way to request a signature form the server (hiding the private key in some python code) anyone can make the same http request to get_signature that my javascript makes, thus defeating the point. 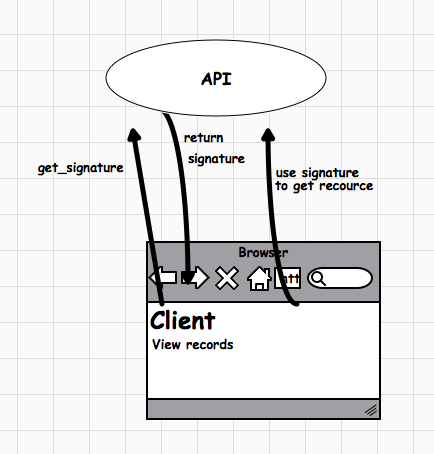 I also tried to have the Django view put the signature in the view eliminating the need to make the get_signature call. This is safe, but means that I have to now refresh the page every time to get a new signature. From a users point of view only the first call to the API would work, after which they need to refresh, again pointless. 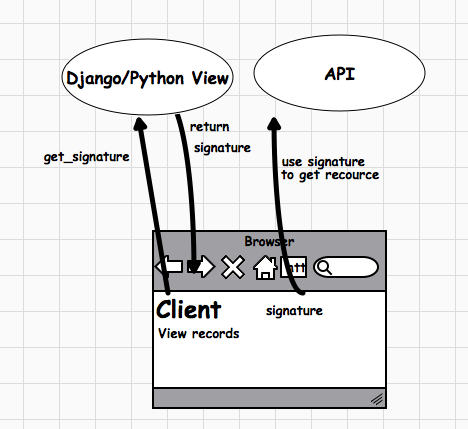 I cannot believe I'm the only person with this requirement. This is a common scenario I'm sure. Please help :) An example using custom authentication in Tastypie would be welcome too.

python django tastypie
Share
Improve this question
edited May 23 '17 at 11:53

Depending on your infrastructure @dragonx's answer might interest you most.

You want to make sure that only if a client visits your website can use the api? Hmm does the bot, robot, crawler fall in the same category with the client then? Or am I wrong? This can be easily exploited in case you really want to secure it really.

I cannot believe I'm the only person with this requirement.

Maybe not, but as you can see you are prone to several attacks to your API and that can be a reason for someone not sharing your design and making security stricter with auth.

Since we are talking about AJAX requests what does the IP part has to do with this? The IP will always be the Client's IP! So probably, you want a public API...

To overcome the problem with the refreshing token I would just do this:

The 1st token is generated via the server when the client visits. Then the client uses that token in order to obtain a real one, that lasts for some time or something else as of limitation. This makes someone actually visit the webpage and then he can access the API for a limit amount of time, requests perhaps etc.

This way you don't need refreshing.

Of course the above scenario could be simplified with only one token and a time limit as mentioned above.

Of course the above scenario is prone to advanced crawlers, etc since you have no authentication.

Of course a clever attacker can grab tokens from server and repeat the steps but, then you already had that that problem from start.

PS. regarding IP spoofing and Defense against spoofing attacks wikipedia says so packet's won't be returned to the attacker:

Some upper layer protocols provide their own defense against IP spoofing attacks. For example, Transmission Control Protocol (TCP) uses sequence numbers negotiated with the remote machine to ensure that arriving packets are part of an established connection. Since the attacker normally can't see any reply packets, the sequence number must be guessed in order to hijack the connection. The poor implementation in many older operating systems and network devices, however, means that TCP sequence numbers can be predicted.

If it's purely the same server, you can verify requests against 127.0.0.1 or localhost.

Otherwise the solution is probably at the network level, to have a separate private subnet that you can check against. It should be difficult for an attacker to spoof your subnet without being on your subnet.

Now if the above scenario correctly describes your case, what you are probably trying to do is to protect your API from bot scraping. The easiest protection is CAPTCHA, and you can find some more ideas on the Wiki page.

If you are concerned that other sites may make AJAX calls to your API to copy your site functionality, you shouldn't be--AJAX requests can only be sent to the same server as the page the JS is running on, unless it is JSONP.

Short answer: It is not possible to prevent a dedicated attacker.

You have no method of identifying a client other than with the information that they give you. For instance, username/password authentication works under the assumption that only a valid client would be able to provide valid credentials. When someone logs in, all you know is that some person provided those credentials -- you assume that this means that this means that they are a legitimate user.

Let's take a look at your scenario here, as I understand it. The only method you have of authenticating a client is IP Address, a very weak form of authentication. As you stated, this can be easily spoofed, and in with some effort your server's response can be received back to the attacker's original IP address. If this happens, you can't do anything about it. The fact is, if you assume someone from a valid IP address is a valid user, then spoofers and legitimate users are indistinguishable. This is just like if someone steals your password and tries to log in to StackOverflow. To StackOverflow, the attacker and you are indistinguishable, since all they have to go on is the username and password.

You can do fancy things with the client as mentioned in other answers, such as tokens, time limits, etc., but an dedicated attacker would be able to mimic the actions of a legitimate client, and you wouldn't be able to tell them apart because they would both appear to be from valid IP addresses. For instance, in your last example, if I was an attacker looking to make API calls, I would spoof a legitimate IP address, get the signature, and use it to make an API call, just as a legitimate client would.

If your application is critical enough to deem this level of thought into security, you should at least think of implementing something like API tokens, public key encryption, or other authentication methods that are more secure than IP addresses to tell your clients apart from any attackers. Authentication by IP address (or other easily forged tokens like hostname or headers) simply won't cut it.

may be you could achieve this by using Same-origin policy

As suggested by Venkatesh Bachu, Same Origin Policy and http://en.wikipedia.org/wiki/Cross-Origin_Resource_Sharing (CORS) could be used as a solution. In your API, you can check Origin header and respond accordingly. Need to check if Origin header can be modified by using extensions like tamper data. A determined hacker can still snoop by pointing browser to a local proxy server.

If this app server is running on an ordinary web server that has configurable listening IP address, set it to 127.0.0.1. With the TCPServer module, it's like

Use netstat command to verify the listening address is correct as "127.0.0.1"

This will effectively making any connection originated outside the same host impossible on the TCP level.

There are two general solution types: in-band solutions using normal web server/client mechanisms, that are easy to implement but have limitations; and out-of-band solutions that rely on you to configure something externally, that take a little more work but don't have the same limitations as in-band.

If you prefer an in-band solution, then the typical approach used to prevent cross-site request forgery (XSRF) would work well. Server issues a token with a limited life span; client uses the token in requests; privacy of token is (sort of) assured by using an HTTPS connection. This approach is used widely, and works well unless you are worried about man-in-the-middle attacks that could intercept the token, or buggy browsers that could leak data to other client-side code that's being naughty.

You can eliminate those limitations, if you're motivated, by introducing client certificates. These are kind of the flip side to the SSL certificates we all use on web servers -- they operate the same way, but are used to identify the client rather than the server. Because the certificate itself never goes over the wire (you install it locally in the browser or other client), you don't have the same threats from man-in-the-middle and browser leakage. This solution isn't used much in the wild because it's confusing to set up (very confusing for the typical user), but if you have a limited number of clients and they are under your control, then it could be feasible to deploy and manage this limited number of client certificates. The certificate operations are handled by the browser, not in client code (i.e. not in JavaScript) so your concern about key data being visible in JavaScript would not apply in this scenario.

Lastly, if you want to skip over the client configuration nonsense, use the ultimate out-of-band solution -- iptables or a similar tool to create an application-level firewall that only allows sessions that originate from network interfaces (like local loopback) that you know for certain can't be accessed off the box.

Not the answer you're looking for? Browse other questions tagged python django tastypie or ask your own question.

5400
How to execute a program or call a system command?
1124
How do I find the location of my Python site-packages directory?
3311
How to get the current time in Python
1264
How to get the filename without the extension from a path in Python?
863
What are the differences between the urllib, urllib2, urllib3 and requests module?
817
How to POST JSON data with Python Requests?
2257
How can I remove a key from a Python dictionary?
1120
How does the @property decorator work in Python?
0
TastyPie Authentication from the same server