Is there a concise opposite of "empty"?

Interfaces to string classes typically have of method named IsEmpty (VCL) or empty (STL). That's absolutely reasonable because it's a special case, but the code that uses these methods often has to negate this predicate, which leads to a "optical (and even psychological) overhead" (the exclamation mark is not very obvious, especially after an opening parenthesis). See for instance this (simplified) code:

It has four negations, because the empty cases are those to be skipped. I often observe this kind of negation, also when designing interfaces, and it's not a big problem but it's annoying. I only wish to support writing understandable and easy-to-read code. I hope you'll understand my point.

Maybe I'm only struck with blindness: How would you solve the above problem?

Edit: After reading some comments, I think it's nessessary to say that the original code uses the class System::AnsiString of the VCL. This class provides an IsEmpty method, which is very readable:

...instead of if text is not empty. I think the literal is was better left to the reader's fantasy to let also the negation work well. Ok, maybe not a widespread problem...

In most cases you can reverse the order of the ifand the else to clean up the code:

Or even cleaner after some more refactoring:

And for the ultimate compactness (although I prefer the previous version, for its readability):

Another possibility is to create a helper function:

I think I'd eliminate the conditions in favor of a little math: 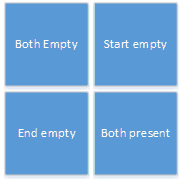 (Feel free to swap the "start empty" and "end empty", depending on whether you prefer to think in row-major or column-major order).

The start.empty() and end.empty() (or the logical not of them, if you prefer) each act as as an index along one dimension of this 2D matrix. The math involved simply "linearizes" that addressing, so instead of two rows and two columns, we get one long row, something like this:

In mathematical terms, that's a simple matter of "row * columns + column" (or, again, vice versa, depending on whether you prefer row-major or column-major ordering). I originally expressed the * 2 part as a bit-shift and the addition as a bit-wise or (knowing the least significant bit is empty, because of the previous left-shift). I find that easy to deal with, but I guess I can understand where others might not.

I should probably add: although I've already mentioned row-major vs. column-major, it should be fairly obvious that the mapping from the two "x.empty" values to positions in the array is basically arbitrary. The value we get from .empty() means that we get a 0 when the value is not present, and a 1 when it is. As such, a direct mapping from the original values to the array positions is probably like this: 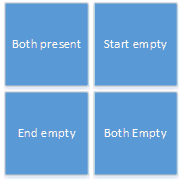 Since we're linearizing the value we have a few choices for how we do the mapping:

For those who doubt the efficiency of this, it actually compiles down to this (with VC++):

Even the one-time construction for f isn't nearly as bad as some might think. It doesn't involve dynamic allocation, or anything on that order. The names are long enough that it looks a little scary initially, but in the end, it's mostly four repetitions of:

Leaving out the static const doesn't really seem to affect execution speed much. Since the table is static, I think it should be there, but as far as execution speed goes, it's not the kind of massive win we might expect if the table initialization involved four separate dynamic allocations, or anything like that.

Whether that is more readable is a different matter. Here you are calling a method whose primary purpose is not to tell you if the thing is empty, and relying on an implicit conversion to bool. I would prefer the !s.empty() version. I might use not instead for fun:

It might be interesting to see the correlation between people who find the ! and not versions confusing.

There… clean clean clean. If something here is difficult to read, add a comment, not another if clause.

Usually it's just better to not use such complicated conditional code. Why not keep it simple?

Globally, I have no problem with the way you've written it; it's certainly cleaner that the alternatives that others are proposing. If you're worried about the ! disappearing (which is a legitimate worry), use more white space.

Or try using the keyword not instead:

(With most editors, the not will be highlighted as a keyword, which will draw even more attention to it.)

This has the added advantage of giving the functionality a better name. (Function names are verbs, so c.empty() logically means "empty the container", and not "is the container empty". But if you start wrapping all of the functions in the standard library that have poor names, you've got your work cut out for you.)

Since no one cared to type the complete answer with my comment, here it goes:

Create local variables that simplify the reading of expressions:

The compiler is smart enough to elide those variables, and even if it did not, it won't be less efficient than the original (I expect both to be a single test of a variable). The code now is a bit more readable for a human that can just read the conditions:

if has start or end then

Of course you might also do different refactors to further simplify the number of nested operations, like singling out when there is no start or end and bailing out early...

I struggle with the psychological overhead of negative logic as well.

One solution to this (when it cannot be avoided) is to check for the explicit condition, consider:

The second version is easier to read because it flows as you would read it out loud. It also makes it clear that you're checking a false condition.

Now if that is still not good enough for you, my advice would be to create a thin wrapper class that inherits from whatever container you're using and then create your own method for that particular check.

For example with strings:

If all you're concerned about is the ease with which ! can be overlooked, you can use the standard C++ alternative token not instead:

(Refer to [lex.digraph] in the standard for alternative tokens)

Would you consider assigned a good opposite?

Structural improvements of the "test function" came from numerous useful answers. Special thanks to:

To express the opposite form of ".isEmpty()" usage, I prefer this way:

Also, you may use ".equals("")" instead of "!=" typography as recommended by Android Studio.

Coming back to the API design aspect

(it may not be applicable to strings, but on container classes in general)

in a completely unrelated post being the answer to the question

How do I know if a generator is empty from the start?

To contrast empty and any might be poor in English but it absolutely makes sense in API design.

Not the answer you're looking for? Browse other questions tagged c++ string containers api-design readability or ask your own question.

206
How do I know if a generator is empty from the start?
157
Purpose of returning by const value?
43
Effective C++ Item 23 Prefer non-member non-friend functions to member functions
7
Concise way to write a for/else in C++?

542
Check whether a string is not null and not empty
952
Remove empty array elements
881
Remove empty strings from a list of strings
299
What's the rationale for null terminated strings?
3
std::set<std::pair<size_t, std::string> >::find(), without a string copy construction
1910
How to check if the string is empty?
1
First Defined here in g++ from class to namespace
482
What is the proper REST response code for a valid request but an empty data?