What is the overhead of a context-switch?

Originally I believed the overhead to a context-switch was the TLB being flushed. However I just saw on wikipedia:

Does the above confirm for newer Intel CPUs the TLB doesn't get flushed on context switches?

Does this mean there is no real overhead now in a context-switch?

As wikipedia knows in its Context switch article, "context switch is the process of storing and restoring the state (context) of a process so that execution can be resumed from the same point at a later time.". I'll assume context switch between two processes of the same OS, not the user/kernel mode transition (syscall) which is much faster and needs no TLB flush.

So, there is lot of time needed for OS kernel to save execution state (all, really all, registers; and many special control structures) of current running process to memory, and then load execution state of other process (read in from memory). TLB flush, if needed, will add some time to the switch, but it is only small part of total overhead.

I can't find results for nehalem (is there lmbench in phoronix suite?), but for core2 and modern Linux context switch may cost 5-7 microseconds.

There are also results for lower-quality test http://blog.tsunanet.net/2010/11/how-long-does-it-take-to-make-context.html with 1-3 microseconds for context switch. Can't get exact effect of non-flushing the TLB from his results.

UPDATE - Your question should be about Virtualization, not about process context switch.

Nehalem’s TLB entries have also changed subtly by introducing a “Virtual Processor ID” or VPID. Every TLB entry caches a virtual to physical address translation ... that translation is specific to a given process and virtual machine. Intel’s older CPUs would flush the TLBs whenever the processor switched between the virtualized guest and the host instance, to ensure that processes only accessed memory they were allowed to touch. The VPID tracks which VM a given translation entry in the TLB is associated with, so that when a VM exit and re-entry occurs, the TLBs do not have to be flushed for safety. .... The VPID is helpful for virtualization performance by lowering the overhead of VM transitions; Intel estimates that the latency of a round trip VM transition in Nehalem is 40% compared to Merom (i.e. the 65nm Core 2) and about a third lower than the 45nm Penryn.

Also, you should know, that in the fragment cited by you in the question, the "[18]" link was to "G. Neiger, A. Santoni, F. Leung, D. Rodgers, and R. Uhlig. Intel Virtualization Technology: Hardware Support for Efficient Processor Virtualization. Intel Technology Journal, 10(3).", so this is feature for effective virtualization (fast guest-host switches).

For direct costs, this is mostly the cost of saving the (architecturally visible to user-space) state for the previous task and then loading the sate for the next task. This varies depending on the situation, mostly because it may or may not include FPU/MMX/SSE/AVX state which can add up to several KiB of data (especially if AVX is involved - e.g. AVX2 is 512 bytes by itself, and AVX-512 is over 2 KiB by itself).

Note that there is a "lazy state load" mechanism to avoid the cost of loading (some or all) FPU/MMX/SSE/AVX state, and avoid the cost of saving that state if it wasn't loaded; and this feature can be disabled for performance reasons (if almost all tasks use the state then the cost of a "state is being used needs to be loaded" trap/exception exceeds what you save from trying to avoid doing it during the task switch) or for security reasons (e.g. because the code in Linux does "save if used" and not "save then clear if used" and leaves data belonging to one task in registers that can be obtained by a different task via. speculative execution attacks).

There is also some other costs (updating statistics - e.g. "amount of CPU time used by previous task"), determining if the new task uses the same virtual address space as the old task (e.g. different thread in same process), etc.

Indirect costs is essentially the loss of effectiveness for all the "cache like" things the CPU has - the caches themselves, the TLBs, higher level paging structure caches, all the branch prediction stuff (branch direction, branch target, return buffer), etc.

Indirect costs can be split into 3 causes. One is indirect costs which occur because the thing was completely flushed by the task switch. In the past, this was mostly limited to TLB misses caused because the TLBs was flushed during the task switch. Note that this can happen even when PCID is being used - there's a limit of 4096 IDs (and when "meltdown mitigation" is being used the IDs are used in pairs - for each virtual address space one ID is used for user-space and another for kernel) which means that when there's more than 4096 (or 2048) virtual address spaces being used the kernel has to recycle previously used IDs and flush all TLBs for the ID that is being re-purposed. However, now (with all the speculative execution security problems) the kernel might flush other things (e.g. branch prediction stuff) so that information can't leak from one task to another, but I really don't know if Linux does or doesn't support this for which "cache like" things (and I suspect they primarily try to prevent data leaking from kernel to user-space and end up preventing data leaking from one task to another by accident).

Another cause of indirect costs is capacity limits. For example, if the L2 cache is only able to cache a maximum of 256 KiB of data and the previous task used more then 256 KiB of data; then the L2 cache will be full of data that is useless for the next task and all of the data that the next task wants cached (and previously had cached) will have been evicted due to "least recently used". This applies to all of the "cache like" things (including TLBs and higher level paging structure caches, even when PCID feature is being used).

Note that the PCID feature has its own costs (not related to task switches themselves). Specifically; when page translations are modified on one CPU they may need to be invalidated on other CPUs using something called "multi-CPU TLB shootdown", which is relatively expensive (involves an IPI/Inter-processor Interrupt that disrupts other CPUs and costs "low hundreds of cycles" per CPU). Without PCID you can avoid some of these. For example, without PCID, for a single-threaded process that is running on one CPU you know that no other CPU can be using the same virtual address space and therefore know that you don't need to do the "multi-CPU TLB shootdown", and if a multi-threaded process is limited to a single NUMA domain then only CPUs within that NUMA domain need to be involved in the "multi-CPU TLB shootdown". When PCID is being used you can't rely on these tricks and have higher overhead because "multi-CPU TLB shootdown" isn't avoided as often.

Of course there's also some cost associated with ID management (e.g. figuring out which ID is free to assign to a newly created task, revoking IDs when tasks are terminated, some kind of "least recently used" system for re-purposing IDs when there's more virtual address spaces than IDs, etc).

Due to these costs there's bound to be pathological cases where the cost of using PCID exceeds the "less TLB misses caused by task switches" benefits (where using PCID makes performance worse).

https://www.usenix.org/legacy/events/expcs07/papers/2-li.pdf (admittedly a bit outdated, but the best I was able to find) gives it in the range of 100K-1M CPU cycles. Theoretically, in a worst-possible case for a multi-socket server box with 32M L3 per-socket caches consisting out of 64-byte cache lines, completely random access, and typical access times of 40 cycles for L3/100 cycles for main RAM, the penalty can reach as much as 30M+ CPU cycles(!).

From personal experience, I'd say it is usually in the range of tens of K cycles, but depending on specifics, it can differ by an order of magnitude.

Note: as Brendan has pointed out in his comment. The objective of this answer is to answer the detail What is the overall impact of context switches on a windows server/desktop performance including operating system overheads which are different on Windows vs Linux vs Solaris etc....

The best way to find out is of course to benchmark it. The issue here is that the relationship between number of context switches per second and CPU time is exponential. In other words it is an O(n2) cost. Meaning we have a max limit that simply cannot be exceeded.

The following benchmark code uses a few unsafe variables etc... ignore this as that is not the point.

The actual work done per thread is minimal. In theory each thread should generate 1000 context switches per second. 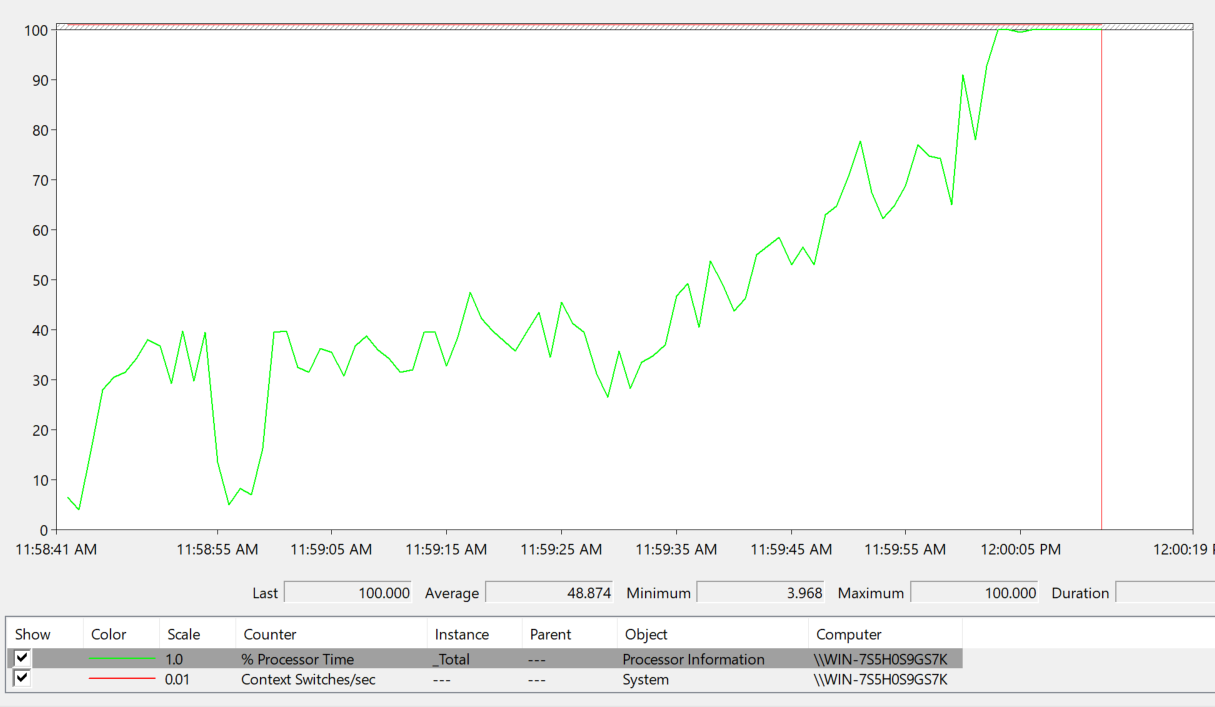