I want to start a new Drop-Wizard project. There is a maven archetype specified in the DW github (here) . But i don't know how to import it into my Intellij Idea's add Archtype option. Being specific, which link i have to provide in the Repository field. Any help would be appreciated.

Since the dropwizard archetypes are not available in maven central repository you have to:

Here you have your project generated then you can import it into Intellij IDEA as a maven project.

Currently, to create a Dropwizard project from Maven archetype using IntelliJ IDEA one should select File>New>Project from menu. Then, in the dialog it is necessary to select Maven on the left-hand side, check Create from archetype at the top and press the Add Archetype button.

After that in a dialog that appears 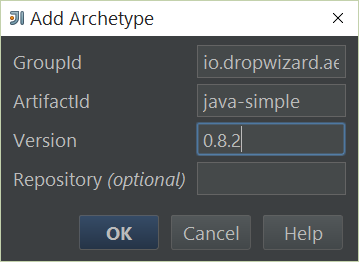 The information about the latest Dropwizard version can be obtained here.

After the aforementioned actions are completed, the desired archetype appears in the list.

Then one should press Next an fill the project's artifact and group ids and press Next. For this particular archetype it is necessary that a property called name should be added which is later used to produce names of application and configuration classes.

After pressing Next and Finish, one can see a newly created project. 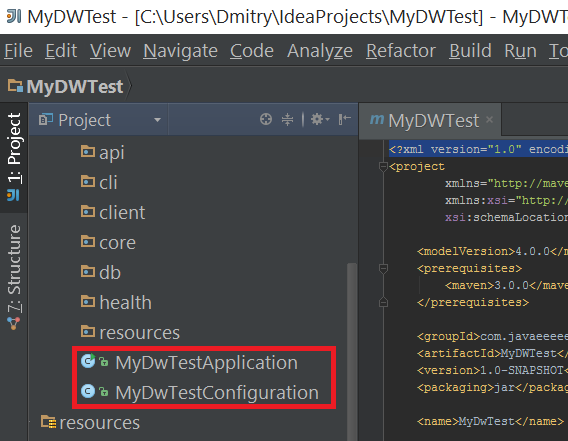 Alternatively, one could create a project using a Command Line Interface as described here, and then import the project into IDEA.

I discovered that the dropwizard-archetypes are only available in the feature branch feature/maven-archetypes, so you have to substitute the following for steps 2-3 above:

(findbugs and javadoc tend to run into trouble of various kinds on some modules).

Then of course step 4 becomes

Unfortunately I can't seem to get the resulting executable to run under 64-bit Windows 7.

Not the answer you're looking for? Browse other questions tagged maven github intellij-idea maven-archetype dropwizard or ask your own question.

3886
How can I determine the URL that a local Git repository was originally cloned from?
1832
Is there a way to cache GitHub credentials for pushing commits?
532
IntelliJ inspection gives “Cannot resolve symbol” but still compiles code
3434
How do I update a GitHub forked repository?
393
IntelliJ - Convert a Java project/module into a Maven project/module
333
Preferred Github workflow for updating a pull request after code review
615
Delete forked repo from GitHub
196
Import Maven dependencies in IntelliJ IDEA
1740
Add images to README.md on GitHub