and i got this table 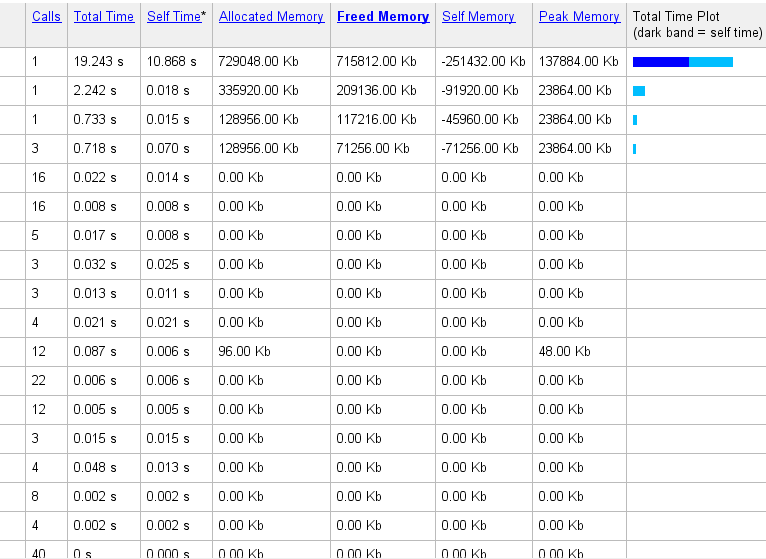 1- i want to ask about the meaning of Allocated Memory,Freed Memory, SelfMemory, and Peak Memory

2- what is the meaning of negative self memory?

After a quick google, it would seem that no-one knows, except perhaps MathWorks and they aren't telling. (I jest, but in truth I found very little information on the subject).

Logically however I would interpret the column names as follows:

Allocated memory = the total amount of memory allocated within the function and any it calls.

Freed memory = the total amount of memory released within the function and any it calls.

Peak Memory = the maximum amount of memory in use at any one time during the execution of the function.

Self Memory = the amount of memory used by the function, but not including any functions it calls.

I would hypothesize that a negative 'Self Memory' would indicate that the function frees more memory than it allocates. This could be that it has ownership of a piece of data passed to it, which it then clears. E.g.:

In the example above, the data is created in the call to B and since Matlab employs a lazy copy memory management, this case works pretty much as pass-by-reference for the return value. So, B allocates the memory, and A frees it.

Indeed, running that code with the profiling method in the question produces the following output, which supports my hypothesis.

Not the answer you're looking for? Browse other questions tagged matlab memory or ask your own question.

808
How can I measure the actual memory usage of an application or process?
284
Virtual Memory Usage from Java under Linux, too much memory used
101
PHP memory profiling
823
How do I discover memory usage of my application in Android?
198
Why is MATLAB so fast in matrix multiplication?
3538
How can I create a memory leak in Java?
2
Matlab profiling
2
Matlab Figure Memory Not Freed
2
Matlab R2017a memory profiler gives a ridiculous number for allocated memory