What is the type of Nothing in Haskell?

It is written there:

Here is my question:

If I understand correctly, Nothing is a value and only concrete types can have values, but Maybe a is not a concrete type. So how can it have the value Nothing?

Notice that the type of Nothing is Maybe a. Its type is polymorphic.

What does polymorphic type mean? How should I understand this? Is this not in contradiction with the rule that only concrete types can have values?

From the PDF version of the book :

We say that a type is concrete if it doesn't take any type parameters at all (like Int or Bool), or if it takes type parameters and they're all filled up (like Maybe Char). If you have some value, its type is always a concrete type.

It's not in contradiction. Nothing is a value, and its concrete type may be any possible instantiation of Maybe a.

Otherwise said, values of type Maybe a continue to have concrete types Maybe Int, Maybe String, Maybe Whatever, and in particular, Nothing is able to be typed by each of them, depending on the context. That's because its constructor, which is again called Nothing :: Maybe a, does not take any parameters and therefore it can be called as-is to generate values of type Maybe a. We will have one per concrete type, if you wish.

Without a context, of course ghci will give you the most general type it can infer for Nothing, which is Maybe a, but it's not its concrete type. That will depend on the individual expressions you will use Nothing in. E.g.:

This is what you probably typed, or something like that. There is no further context, therefore Nothing doesn't get typed with a concrete type.

Here I forced it to assume the concrete type Maybe Int.

If I mix it with a sum of integers (fromMaybe :: a -> Maybe a -> a takes a default value and a Maybe a and returns either the value in the Just or the default with Nothing), then Nothing will get typed as Maybe Integer by the system, since you expect to extract an integer from it. There's none, so in this case we sum 1 with the default 2.

Same here, to double check. We force Nothing to have the concrete type we assumed it had before in the same expression.

To triple-check, if we force it to assume another concrete type, as you see its value will be completely different, resulting in a type error (unlike C, in Haskell Char doesn't act as a number).

Is this not in contradiction with the rule the only concrete types can have values?

Since functions are first-class values in Haskell, this purported rule would mean that polymorphic functions such as map and foldr would be impossible to implement.

There are, in fact, a lot of polymorphic non-function values in Haskell, such as

etc. These values exist for every instantiation of a (and b).

In some sense, you're right. There are no values of type forall a.Maybe a. Every Maybe value you construct will actually have some definite type Maybe tau, where tau may be known or not, but is some definite type.

The notation Nothing :: forall a.Maybe a just tells us that whenever we use the expression Nothing, it will construct a value of the expected Maybe type.

The Maybe type has two constructors: Nothing and Just a, where a is a type variable. Nothing itself does not determine (constrain) the type, but in any reasonable context you'll find something like (I do not claim it to be syntactically correct Haskell but something I would have written 10 years ago):

And then type inference will tell you that (assume 5 was an argument to this code snippet 'foo' of type Int) that foo has type:

But as the previous poster pointed out, Maybe a is a perfectly good type. You'll find the same non-issue with [] ie the list type with [] (the constructor for an empty list).

Also Hudak's book has a nice paragraph on this : 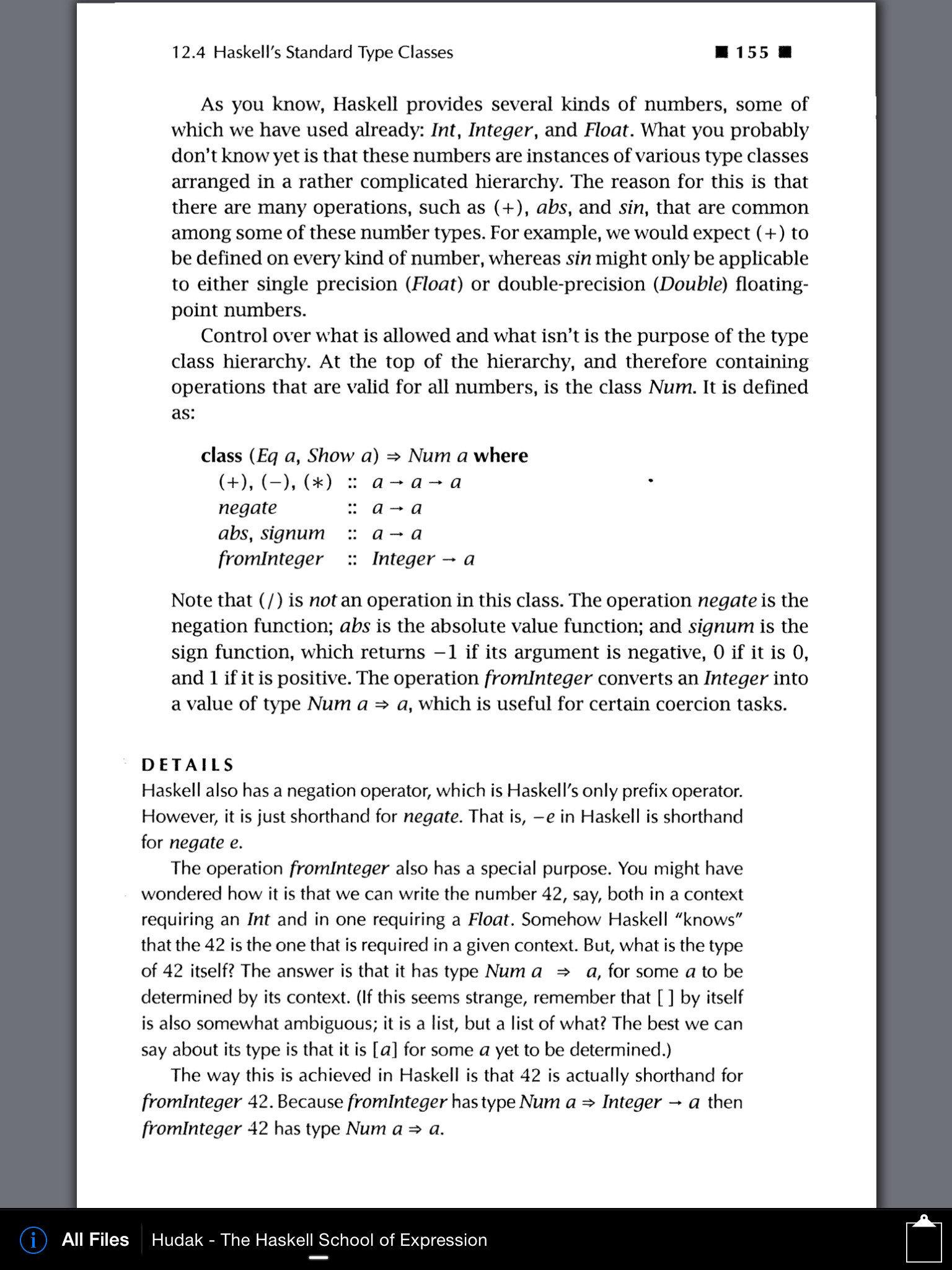 Not the answer you're looking for? Browse other questions tagged haskell types or ask your own question.

3
Haskell - polymorphism and values depending on types
2
How do I properly invoke GI.Gtk scrolledWindowNew in Haskell?

6436
What is the difference between String and string in C#?
1394
What is a monad?
963
What are POD types in C++?
1240
What's the canonical way to check for type in Python?
1526
How to determine a Python variable's type?
755
Getting started with Haskell
1224
What are the differences between type() and isinstance()?
284
What is Weak Head Normal Form?
120
Haskell Type vs Data Constructor
3
haskell polymorphic type functions