Create a legend with pandas and matplotlib.pyplot

This is my first attempt at plotting with python and I'm having problems creating a legend.

These are my imports:

Now I want to create a legend as described here like this:

plt.legend() on its own works, but I only want some of my lines to feature in the legend. Is this the right approach? Is there another command I can use here?

For example, if I try:

I get the error:

I haven't worked out what a proxy artist is yet but I think it is a tool for when you are using a non-default graphical object, which I thought probably was not the case here because I am trying to produce a normal matlibplot plot. The words 'non-default' and 'normal' are mine - I'm not sure what they mean yet.

plt.legend() on it's own doesn't output anything to the console but the resulting plot now has a legend auto-generated from the plotted data.

I think what you want to do is be able to display a legend for a subset of the lines on your plot. This should do it: 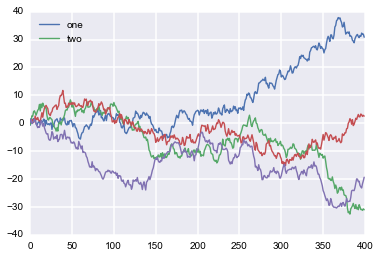 Not the answer you're looking for? Browse other questions tagged python matplotlib pandas or ask your own question.