iOS 7 - Difference between viewDidLoad and viewDidAppear

Sorry but this may not be a programming question per se but more of an inquiry over the nature of iOS lifecycle functions.

I have an application where I have a function that creates four arrays and populates them via database queries. At first, I called the function from the viewDidLoad function, however, whenever the View is loaded, it takes time (around 3-4 seconds) before the view actually appears. So what I did was I created an activityViewIndicator and my viewDidLoad function looks something like:

However this doesn't work since the viewDidLoad function is triggered when the application is still in the previous View. The View only comes into display after viewDidLoad is already done. So what I did instead was move the array initialization to my viewDidAppear function which looks like:

However, when I deployed this, there was no delay whatsoever, making the activityIndicatorView useless.

My question is, why does it seem to me that there's a "performance difference" between viewDidLoad and viewDidAppear?

Please Follow the below View Controller Life Cycle Every Time. You will be amazed with the coding and performance of your application in this manner. 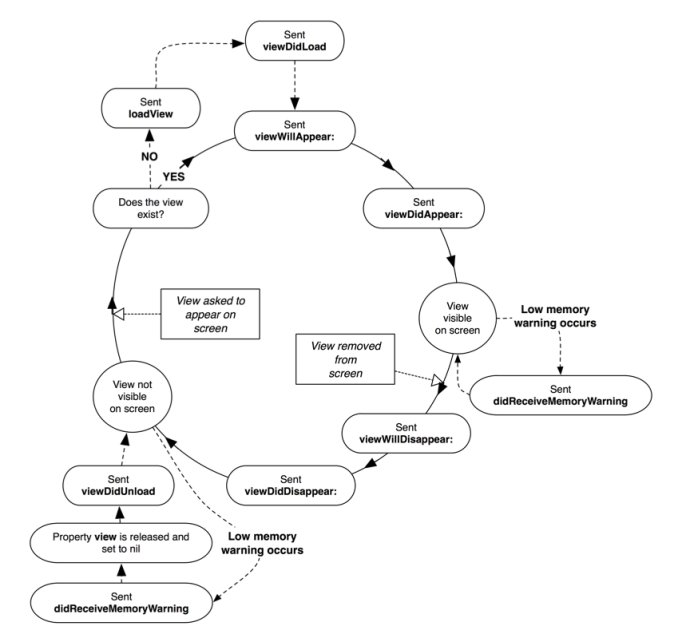 I'm going to point you to Apple's docs because I think there is a need for some more explanation of the View Controller lifecycle than just answering your question as phrased.

Ultimately, your view controller has a life cycle:

init - however you initialize your view controller

viewWillAppear: - when the view is being prepared to appear either immediately (animated == NO) or view a transition (animated == YES)

dealloc - the view controller itself is being deallocated

In the end though, I believe your issue may be that you are blocking the main thread with your array initialization. You should read up on asynchronous programming but in the meantime you could do something like this:

There is absolutely no performance difference between viewDidLoad: and viewDidAppear:. Both are normal functions running on the main thread. If your initializeArrays method takes 3 seconds to load, it will take 3 seconds in whichever method you call it. Since you are not explicitly changing threads, any function in which you call initializeArrays will not exit until it's finished.

However, when you are loading things from a server(or heavy data processing), you also have to think about latency. If you pack all of your network communication into viewDidLoad or viewWillAppear, they will be executed before the user gets to see the view - possibly resulting a short freeze of your app. It may be good idea to first show the user an unpopulated view with an activity indicator of some sort. When you are done with your networking, which may take a second or two (or may even fail - who knows?), you can populate the view with your data. Good examples on how this could be done can be seen in various twitter clients. For example, when you view the author detail page in Twitterrific, the view only says "Loading..." until the network queries have completed.

ViewDidLoad calls only once when you initialized your ViewController but Viewdidapper calls every time.

View Did Load - First method , which is called when view is loaded first time but not appeared on screen/window, only loaded.

only called one time when view is loaded first time.

View Did Appear - After viewWillAppear called , viewDidAppear will be called. It means view is appeared on screen now.

Called number of times as user is moving from that viewcontroller to another view controller and coming back .

loadView comes first and is where UI elements are typically created, including the view of the view controller itself (which programmatic development must explicitly create). Constraints can be added here but they are not handled until later in the lifecycle.

viewDidLoad is where "logic" is typically made once the UI elements have been established.

viewWillAppear and viewWillLayoutSubviews are called next right before the UI itself is to construct itself.

viewDidLayoutSubviews is called next and can be called multiple times on the same view controller before it actually appears. This is where auto layout is applied. This is also where the programmer can get a view's safe area values since they are not available before this method.

viewDidAppear comes last after the view controller's view has appeared in a view hierarchy.

1114
How to change the name of an iOS app?
1930
What's the difference between the atomic and nonatomic attributes?
1394
How can I check for an active Internet connection on iOS or macOS?
899
How to check iOS version?
1490
Passing data between view controllers
94
Difference between viewDidLoad and viewDidAppear
1078
How to change Status Bar text color in iOS
682
iOS 8 UITableView separator inset 0 not working
0
Swift - ViewDidAppear called from another class