Why does PRINT'ing a true boolean expression output -1? 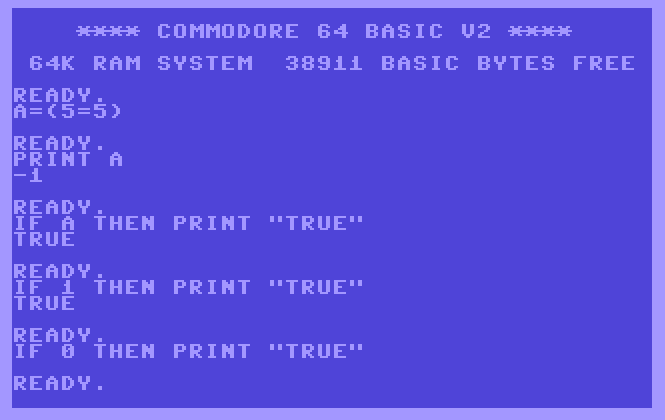 Commodore Basic doesn't have a boolean data type. A boolean expression evaluates to a number, where 0 means False and -1 means true.

As there is no boolean data type there are no boolean type expressions. You can use any numeric expression in an IF statement, and it will interpret any non-zero value as True.

Some languages where a boolean value is numeric or where it can be converted to a numeric value uses -1 to represent a true value. For an integer value 0 all bits are cleared, and for -1 all bits are set, so they can be seen as natural complements for each other.

Eventhough Commodore Basic doesn't use integer numbers but floating point numbers, the value -1 was supposedly chosen because some other languages uses it.

It's just a convention

The reason underlying the choice for this convention may be related to the internal representation of integers numbers on most platforms:

Suppose a boolean value is stored in a 16 bits wide integer; false is 0 (every bit unset).

It makes sense to agree upon another convention where true is all bits set:

While the binary representation of 1 is

So that's why -1 and not 1: is just a convention; but if you look at the binary representation of the value you may agree that the convention makes sense.

However this convention is far from being universally adopted despite all the above considerations. On many languages true casted to a numeric value is 1.

An important note about the code you posted:

A is a real variable whose value is represented by 5 bytes (1 for exponent, 4 for mantissa).

So again C64 Basic just sticks to a convention.

Finally let's explain the behaviuour of the IF statements in your code.

Any value different from 0 is evaluated as true in an IF statement (this happens on most languages, maybe all).

If you want to take a look at the internal representation of a C64 variable (integer or real only, not strings) you may use the following code:

There is a way that this may be used, by customising a for loop, i.e., if you wanted something to happen until a key is pressed, one might:

This is the same sort of logic as a do...while loop.

Edit - If you specifically wanted 0 to be false and 1 to be true, you could define a function as follows (I forgot about the ABS keyword as I've not used it in probably 20 years :-|) :

Not the answer you're looking for? Browse other questions tagged basic c64 or ask your own question.

285
What does DIM stand for in Visual Basic and BASIC?
0
Regular expression to match a comma not inside a string literal
20
Bash Version of C64 Code Art: 10 PRINT CHR$(205.5+RND(1)); : GOTO 10
12
Printing a board in Commodore Basic 4.0?
1
DIY G-code from scratch. (in BASIC)
0
Printing in Color in HTBasic/Rocky Mountain BASIC in Windows XP
1
Type Mismach Basic Language
0
IchigoJam BASIC doesn't require end of double quote when printing a string
1
Parse a list of expressions using pyparsing