Differences between Oracle JDK and OpenJDK

NOTE: This question is from 2014. As of Java 11 OpenJDK and Oracle JDK are converging.

Are there any crucial differences between Oracle and OpenJDK?

For example, are the garbage collection and other JVM parameters the same?

Does GC work differently between the two?

Both OpenJDK and Oracle JDK are created and maintained currently by Oracle only.

Most of the vendors of JDK are written on top of OpenJDK by doing a few tweaks to [mostly to replace licensed proprietary parts / replace with more high-performance items that only work on specific OS] components without breaking the TCK compatibility.

Almost every existing JDK is derived from OpenJDK.

As suggested by many, licensing is a change between JDKs.

Starting with JDK 11 accessing the long time support Oracle JDK/Java SE will now require a commercial license. You should now pay attention to which JDK you're installing as Oracle JDK without subscription could stop working. source

For Java 7, nothing crucial. The OpenJDK project is mostly based on HotSpot source code donated by Sun.

Moreover, OpenJDK was selected to be the reference implementation for Java 7 and is maintained by Oracle engineers.

There's a more detailed answer from 2012 on difference between JVM, JDK, JRE & OpenJDK, which links to an Oracle blog post:

Q: What is the difference between the source code found in the OpenJDK repository, and the code you use to build the Oracle JDK?

A key difference going forward is the release schedule and support policy.

OpenJDK will have a feature release every 6 months which is only supported until the next feature release. It's essentially a continuous stream of releases targeted to developers.

The Oracle JDK is targeted more towards an enterprise audience which values stability. It's based on one of the OpenJDK releases but is then given long term support (LTS). The Oracle JDK has releases planned every 3 years. 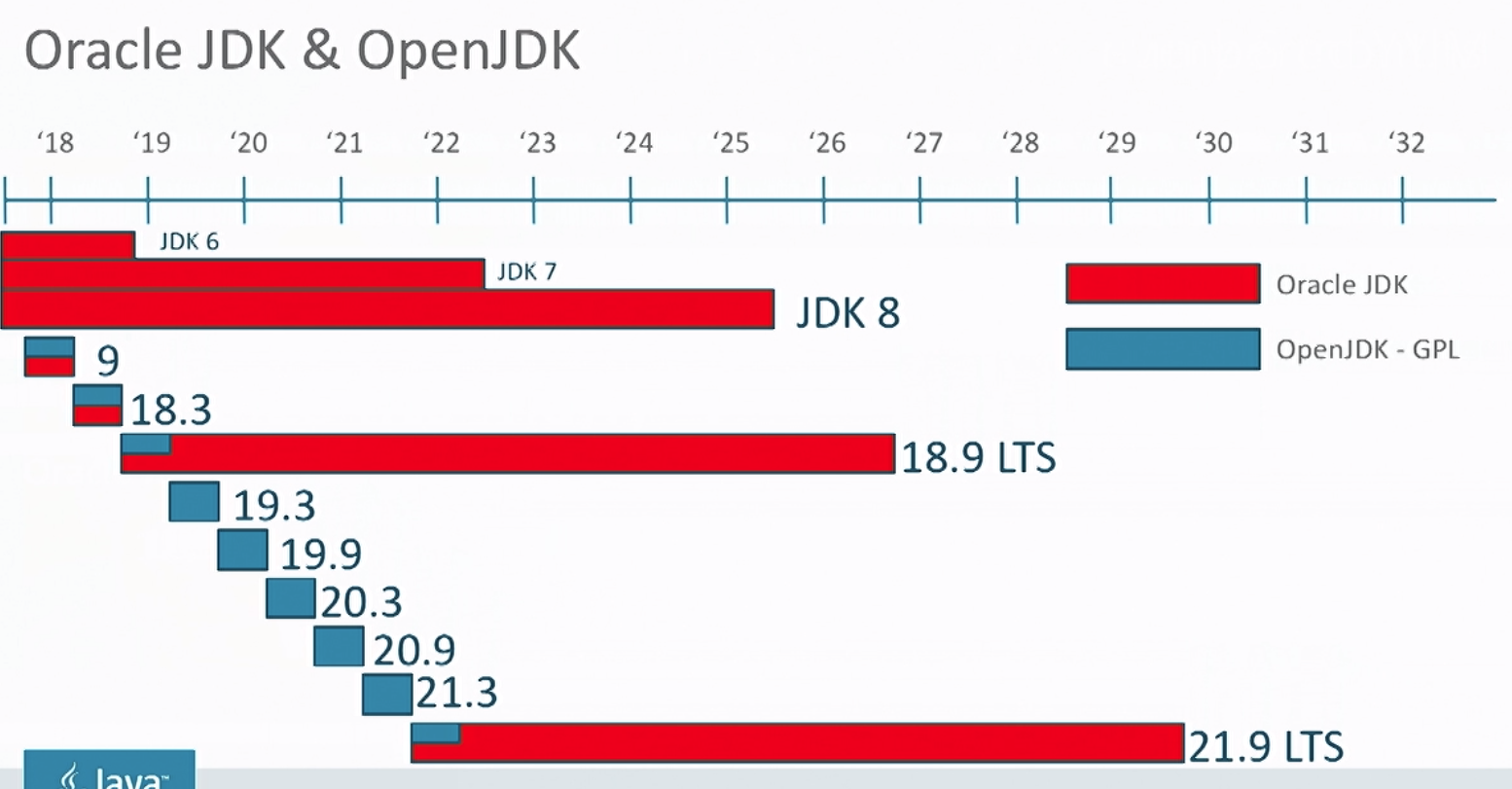 For Java 8, Oracle JDK vs. OpenJDK my take of key differences:

For a full list of differences please see the source article: Oracle JDK vs OpenJDK and Java JDK Development Process

The Oracle and OpenJDK JVMs are the same and have the same GC features (as of the latest versions 10+). Prior to Oracle managing the OpenJDK JVM there were concrete differences that made that old Openjdk JVM almost unusable in many environments. The JVMs are now the same.

The JDKs which include the JVM as part of the Kit, differ by licensing, release and maintenance schedule, and the software libraries included in the JDK. Crucial differences to me also mean things that would make code not run if not present. Not only licensing.

Crucially the following files are missing in addition to a bunch of others on the linux JDK (So if you 'claimed' that code didn't work on OpenJDK and did so on OracleJDK while you were using javafx then you were correct):

According to the oracle blog, Oracle JDK Releases for Java 11 and Later

Different builds will be provided for each license, but these builds are functionally identical aside from some cosmetic and packaging differences, described in detail below.

From the BCL to the GPL

Oracle’s BCL-licensed JDK historically contained “commercial features” that were not available in OpenJDK builds. As promised, however, over the past year Oracle has contributed these features to the OpenJDK Community, including:

...yet with some cosmetic and packaging differences

There do remain a small number of differences, some intentional and cosmetic, and some simply because more time to discuss with OpenJDK contributors is warranted.

This difference remains in order to provide a consistent experience for specific kinds of legacy use. These modules are either now available separately as part of OpenJFX, are now in both OpenJDK and the Oracle JDK because they were commercial features which Oracle contributed to OpenJDK (e.g., Flight Recorder), or were removed from Oracle JDK 11 (e.g., JNLP).

And for an OpenJDK 11 build:

From Java 11 turn to a big change

A list of the few remaining cosmetic and packaging differences between Oracle JDK 11 and OpenJDK 11 can be found in this blog post:

Aside from the obvious licensing difference, the major difference between OpenJDK and OracleJDK 11 are stability and performance updates.

Every 6 months the two codebases will be in-sync. But during the 6 month window OpenJDK will only receive security updates while OracleJDK will receive additional stability and performance updates.

Given that update releases only occur every 3 months for both OpenJDK and OracleJDK this means that you are missing out on (at most) 3 months worth of fixes until the next major release comes out and you upgrade. However, if you choose to stick to LTS releases then a commercial license begins to make more sense.

Also for Java 8 an interesting performance benchmark for reactive (non-blocking) Spring Boot REST application being hosted on various JVMs by AMIS Technology Blog has been published in Nov 2018 showing that, among other differences:

Of course YMMV, this is just one of the benchmarks.

My understanding is that Oracle JDK can't be used in production, therefore I cannot legally use it (without paying), for the web application I am building for my company. I have to use OpenJDK. Please correct me if I am wrong! From this article.

UPDATE: I'm wrong. I can use Oracle JDK for free but won't get security updates after 6 mos and we'll have to assume the risk. Look at the above linked article section "What does the new release train mean to my company?".

It is very close - our build process for Oracle JDK releases builds on OpenJDK 7 by adding just a couple of pieces, like the deployment code, which includes Oracle's implementation of the Java Plugin and Java WebStart, as well as some closed source third-party components like a graphics rasterizer, some open-source third party components, like Rhino, and a few bits and pieces here and there, like additional documentation or third-party fonts. Moving forward, we intend to open source all pieces of the Oracle JDK except those that we consider commercial features such as JRockit Mission Control (not yet available in Oracle JDK) and replace encumbered third-party components with open source alternatives to achieve closer parity between the codebases.

· Yes, the garbage collection and other JVM parameters are the same.

· The performance of GC is the same in both.

Not the answer you're looking for? Browse other questions tagged java difference or ask your own question.

118
Technically what is the main difference between Oracle JDK and OpenJDK?
3
Why oracle is maintaining both openJDK and JDK?
2
Why one should go for Oracle JDK when Open JDK exists?
361
What is the difference between JVM, JDK, JRE & OpenJDK?
199
How to install a specific JDK on Mac OS X?
74
Differences Amazon Corretto and OpenJDK
38
Time complexity of System.arraycopy(...)?
22
Where is the src.zip for JDK8u40?
20
What is the reason to use OpenJDK?
34
Is OpenJDK 8 a reference implementation of Java SE 8?
See more linked questions