I was wondering if there is a HTML entity code or ASCII Character for the windows logo. The one that is visible on the windows key (between Ctrl and Alt).

I would've Google'd it however I did not know what to Google and a lot of the characters can't even be seen on Windows so I wouldn't have known if I had seen it.

One of the reasons I am asking this is so instead of saying Windows Key I can actually have the logo in there.

If there isn't a logo available, is there one that closely resembles it and can be easily understood.

Also, as a added question but still relevant, is there a client side program that can be installed to see the currently unavailable ascii/unicode/entity characters on Windows?

As explained in @HansPassant’s answer, there is really no adequate way to use the “Windows logo” (more properly called “Windows icon”) as a character. Theoretically, you could use a Private Use codepoint for it, but then you would need a font containing it in that codepoint, and of course this would not work reliably; Private Use codepoints are by definition for use by private agreements and should not be used in public information interchange (though “icon fonts” do just that).

And as mentioned in that answer, the Wingdings font has a “Windows logo” at code point U+00FF, where the letter “ÿ” should be present. This means that you could use

Naturally, in any system where a font named Wingdings does not exist, the user would see the letter “ÿ” in the default font. This also happens e.g. in Firefox on Windows, as the browser apparently refuses to play such a font game. Arguably, that’s the correct behavior: if you ask a browser to show a character, say “ÿ”, in a specific font and that font does not contain a glyph for that character, the browser should decline and use another font.

However, Microsoft has been changing the logo every few versions.

For Windows Vista/7 it looks best in bold italic ⊞.

Company logos are not included in the Unicode character set. For obvious reasons, beyond those companies changing their logo all the time. Like Microsoft did with theirs. You'll want to avoid the marketing department of a company from instantly obsoleting your product :)

You can find non-standard glyphs in one of the symbol fonts, those that map glyphs that are not in the Unicode character set. On Windows, the logo is included in the Wingdings font, character code U+00FF. Use the Charmap.exe applet to see it. It is the olden logo, not the current rectangular one. Could still be appropriate, the key cap on the user's keyboard might still be the old one as well. Or in the way a computer user still knows that the icon for the Save command is a floppy disk, even though nobody has ever seen one in the past 10+ years :) If you put it on a web page then Apple and Linux users are of course unlikely to be happy campers and liable to leave quickly. 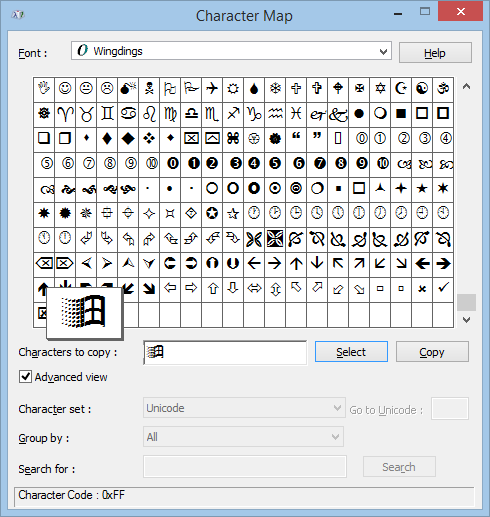 W in the Marlett font has the benefit of giving the user the Windows logo version of the machine he is currently using. For instance, on Windows 7: 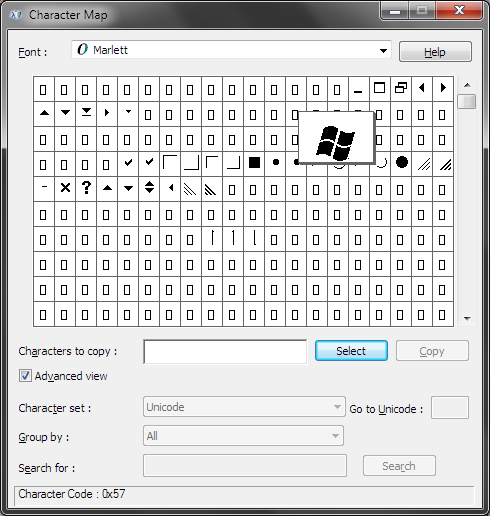 If the use is for the web you could get symbols by CSS. For example Font Awesome has a windows symbol in their font. It's vector graphics so should work in any size.

Would be used in this way:

Then in the document:

To address the second question, the tools BableMap.exe (free, by Andrew West) and CharMapEx.exe (free, by Mihai Nita) are useful for font, Unicode, and glyph availability on Windows.

An option is using a SVG image.

Best option to use once.

Best option to use multiple times.

Not the answer you're looking for? Browse other questions tagged unicode ascii html-entities or ask your own question.

1049
Adding HTML entities using CSS content
1110
How to get the ASCII value of a character
320
How to use unicode characters in Windows command line?
374
Unicode, UTF, ASCII, ANSI format differences
1291
What characters can be used for up/down triangle (arrow without stem) for display in HTML?
1363
UnicodeEncodeError: 'ascii' codec can't encode character u'\xa0' in position 20: ordinal not in range(128)
460
What's the difference between ASCII and Unicode?
265
Replace non-ASCII characters with a single space
1372
Why is executing Java code in comments with certain Unicode characters allowed?