accuracy of sqrt of integers

This requires doing a multiplication every iteration. If I could calculate the sqrt before the loop then I could avoid this.

In my case it's okay if the sqrt function rounds up to the next integer but it's not okay if it rounds down.

My question is: is the sqrt function accurate enough to do this for all cases?

My first concern was the fractional part of float only has 23 bits and double 52 so they can't store all the digits of some 32-bit or 64-bit integers. However, I don't think this is a problem. Let's assume we want the sqrt of some number y but we can't store all the digits of y. If we let the fraction of y we can store be x we can write y = x + dx then we want to make sure that whatever dx we choose does not move us to the next integer.

Float can store 23 bits so we let y = 2^23 + 2^9. This is more than sufficient since 2^9 < 2*sqrt(2^23) + 1. It's easy to show this for double as well with 64-bit integers. So although they can't store all the digits as long as the sqrt of what they can store is accurate then the sqrt(fraction) should be sufficient. Now let's look at what happens for integers close to INT_MAX and the sqrt:

Since float can't store all the digits of 2^31-2 and double can they get different results for the sqrt. But the float version of the sqrt is one integer larger. This is what I want. For 64-bit integers as long as the sqrt of the double always rounds up it's okay.

First, integer multiplication is really quite cheap. So long as you have more than a few cycles of work per loop iteration and one spare execute slot, it should be entirely hidden by reorder on most non-tiny processors.

If you did have a processor with dramatically slow integer multiply, a truly clever compiler might transform your loop to:

replacing the multiply with an lea or a shift and two adds.

However, a basic floating-point error analysis shows that the error in computing sqrt(n) (before conversion to integer) is bounded by 3/4 of an ULP. So you can safely use:

and you’ll perform at most one extra loop iteration, which is probably acceptable. If you want to be totally precise, instead use:

Edit: z boson clarifies that for his purposes, this only matters when n is an exact square (otherwise, getting a value of cut that is “too small by one” is acceptable). In that case, there is no need for the adjustment and on can safely just use:

Why is this true? It’s pretty simple to see, actually. Converting n to double introduces a perturbation:

which satisfies |e| < 2^-53. The mathematical square root of this value can be expanded as follows:

Now, since n is assumed to be a perfect square with at most 64 bits, square_root(n) is an exact integer with at most 32 bits, and is the mathematically precise value that we hope to compute. To analyze the square_root(1+e) term, use a taylor series about 1:

Thus, the mathematically exact value square_root(double_n) is less than half an ULP away from[1] the desired exact answer, and necessarily rounds to that value.

[1] I’m being fast and loose here in my abuse of relative error estimates, where the relative size of an ULP actually varies across a binade — I’m trying to give a bit of the flavor of the proof without getting too bogged down in details. This can all be made perfectly rigorous, it just gets to be a bit wordy for Stack Overflow.

All my answer is useless if you have access to IEEE 754 double precision floating point, since Stephen Canon demonstrated both

Otherwise, if for some reason you have a non IEEE 754 compliant platform, or only single precision, you could get the integer part of square root with a simple Newton-Raphson loop. For example in Squeak Smalltalk we have this method in Integer:

Where // is operator for quotient of integer division.
Final guard guess*guess <= self ifTrue: [^guess]. can be avoided if initial guess is fed in excess of exact solution as is the case here.
Initializing with approximate float sqrt was not an option because integers are arbitrarily large and might overflow

But here, you could seed the initial guess with floating point sqrt approximation, and my bet is that the exact solution will be found in very few loops. In C that would be:

That's a few integer multiplications and divisions, but outside the main loop.

What you are looking for is a way to calculate a rational upper bound of the square root of a natural number. Continued fraction is what you need see [wikipedia][1].

To make the notation more compact, rewriting the above formula as

Truncate the continued fraction by removing the tail term (x-1)/2's at each recursion depth, one gets a sequence of approximations of sqrt(x) as below: 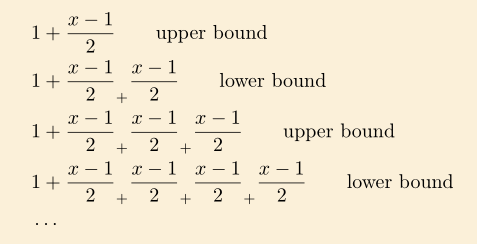 Upper bounds appear at lines with odd line numbers, and gets tighter. When distance between an upper bound and its neighboring lower bound is less than 1, that approximation is what you need. Using that value as the value of cut, here cut must be a float number, solves the problem.

For very large number, rational number should be used, so no precision is lost during conversion between integer and floating point number.

Not the answer you're looking for? Browse other questions tagged c math floating-point or ask your own question.

1438
Fastest way to determine if an integer's square root is an integer
937
What is JavaScript's highest integer value that a number can go to without losing precision?
1
How can I account for round-off errors in floating-point arithmetic for inverse trig (and sqrt) functions (in C)?
903
Integer division with remainder in JavaScript?
8
How do I compare numbers of the form a + b*sqrt(c) without intermediate integers getting larger and larger?
1
C rounding of unsigned->float conversion where src is equal distant from its rounded up or down value?
2
Why 9007199254740995 is rounded to 9007199254740996
8
How to convert a uint64_t to a double/float between 0 and 1 with maximum accuracy (C++)?
1
Is it possible to print a float using integer arithmetic only?
0
C, FLT_MAX value larger than 32 bits?