I'm trying to read the private key of a certificate which has been shared with me by a third-party service provider, so I can use it to encrypt some XML before sending it to them over the wire. I'm doing so programmatically in C#, but I think this is a permissions or misconfiguration issue, so I'll focus on the facts which seem to be most relevant:

Unlike my colleagues, I have made multiple previous attempts to uninstall and re-install the certificate in various ways, including via IIS Manager and also including an older certificate from the same issuer. I can't see any traces of old or duplicate certificates in MMC. However, I do have many private key files of identical size which, based on the last-write time, must have been left behind after my various installation attempts. These are found at the following locations, for the local machine and current user stores respectively:

So, can anyone please advise whether:

UPDATE - Added a code sample showing an attempt to read a private key:

I had the same problem on Windows 8 and Server 2012/2012 R2 with two new certificates I recently received. On Windows 10, the problem no longer occurs (but that does not help me, as the code manipulating the certificate is used on a server). While the solution of Joe Strommen in principle works, the different private key model would require massive change to the code using the certificates. I find that a better solution is to convert the private key from CNG to RSA, as explained by Remy Blok here.

If you load the converted pfx or import it in the Windows certificate store instead of the CNG format pfx, the problem goes away and the C# code does not need to change.

One additional gotcha that I encountered when automating this: we use long generated passwords for the private key and the password may contain ". For the OpenSSL command line, " characters inside the password must be escaped as "".

In my case, I was trying to use a self-signed certificate with PowerShell's New-SelfSignedCertificate command. By default, it will generate a certificate using the CNG (Crypto-Next Generation) API instead of the older/classic crypto CAPI. Some older pieces of code will have trouble with this; in my case it was an older version of the IdentityServer STS provider.

By adding this at the end of my New-SelfSignedCertificate command, I got past the issue:

Reference on the switch for the powershell command:

Here is another reason that this can happen, this was a weird issue and after struggling for a day I solved the issue. As an experiment I changed permission for "C:\ProgramData\Microsoft\Crypto\RSA\MachineKeys" folder which holds private key data for certificates using Machine key store. When you change permission for this folder all privatekeys shows up as "Microsoft Software KSP provider" which is not the provider (in my case they are supposed to be " Microsoft RSA Schannel Cryptographic Provider").

Original permission for this folder can be found in here. In my case I have changed permission for "Everyone", gave read permissions where it removed "Special permissions" tick. So I checked with one of my team member (Right click folder> Properties > Security > Advanced > select "Everyone" > Edit > Click "Advanced settings" in permission check box list 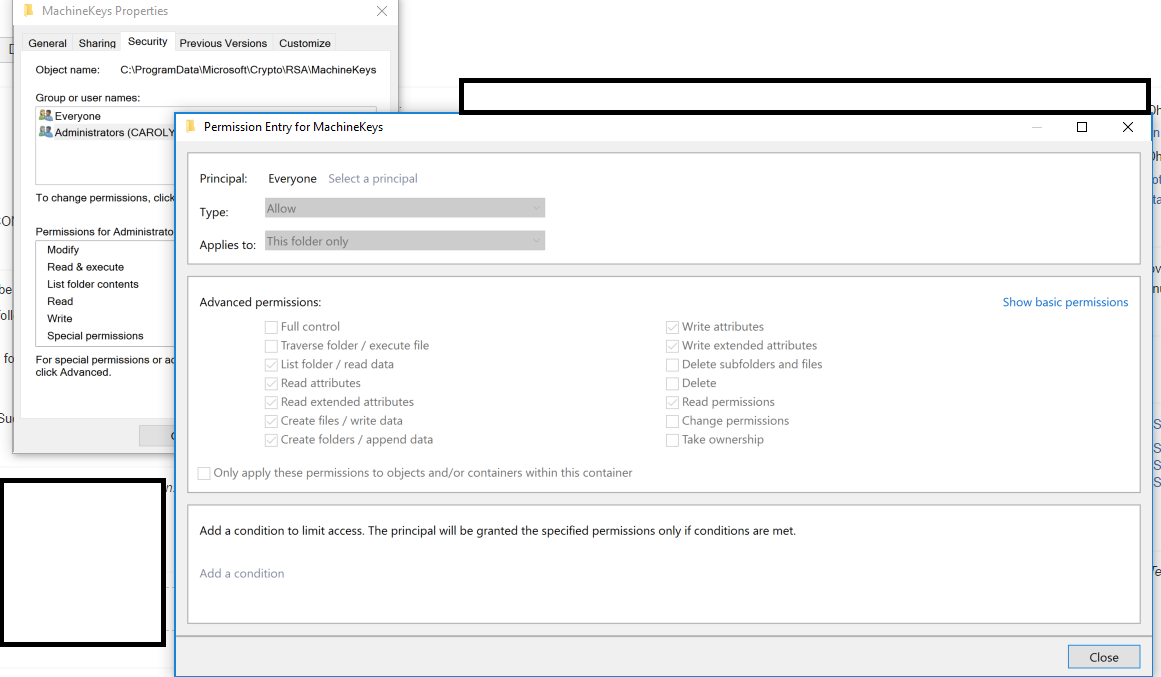 Hope this will save someone's day!

Here is where I found the answer source, credit goes to him for documenting this.

But it failed when deployed to an Azure Web App, at certificate.PrivateKey

It worked by changing the code as follows:

A whole day of work lost thanks to Microsoft Azure, once again in my life.

The link to Alejandro's blog is key.

I believe this is because the certificate is stored on your machine with the CNG ("Crypto Next-Generation") API. The old .NET API is not compatible with it, so it doesn't work.

You can use the Security.Cryptography wrapper for this API (available on Codeplex). This adds extension methods to X509Certificate/X509Certificate2, so your code will look something like:

Unfortunately the object model for CNG private keys is quite a bit different. I'm not sure if you can export them to XML like in your original code sample...in my case I just needed to sign some data with the private key.

Using Visual Studio 2019 and IISExpress, I was able to correct this problem by removing the following flag when loading the .pfx|.p12 file:

This does NOT raise an Exception, instead the Exception is raised when attempting to use the certificate (or in my case, when trying to obtain the .PrivateKey). I've found this issue can be caused when the invoking user has insufficient permissions.

Since I rely on the MachineKeySet flag for some environments, my current solution is to swallow the Exception, change the flags, try again. :/

A more organic solution would be to test the permissions level and set this flag dynamically, however I'm not aware of a simple way to do this, hence the fallback.

NOTE: The .pfx file I'm using was created from a website that uses a JavaScript library (digitalbazaar/forge) which does NOT use CNG (Cryptography Next Generation) Key Storage Providers. here are many common causes for this same error (the most common fixes related to CNG extensions, which have -- unfortunately even changed namespaces in .NET versions), which throw the same error. Microsoft should ultimately be more verbose when throwing these types of errors.

Beginning with .NET Framework 4.6 the private key (assuming it's an RSA key) can be accessed via an extension method on X509Certificate2: cert.GetRSAPrivateKey().

Note that the return type for GetRSAPrivateKey is RSA. Beginning with .NET Framework v4.6 you shouldn't need to cast beyond RSA for standard operations; the only reason to use RSACng or RSACryptoServiceProvider is when you need to interop with programs or libraries that use the NCRYPT_KEY_HANDLE or the key identifier (or opening a persisted key by name). (.NET Framework v4.6 had a lot of places that still cast the input object to RSACryptoServiceProvider, but those were all eliminated by 4.6.2 (of course, that's more than 2 years ago at this point)).

ECDSA certificate support was added in 4.6.1 via a GetECDsaPrivateKey extension method, and DSA was upgraded in 4.6.2 via GetDSAPrivateKey.

On .NET Core the return value from Get[Algorithm]PrivateKey changes depending on the OS. For RSA it's RSACng/RSACryptoServiceProvider on Windows, RSAOpenSsl on Linux (or any UNIX-like OS except macOS), and a non-public type on macOS (meaning you can't cast it beyond RSA).

Powershell version of the answer from @berend-engelbrecht, assuming openssl installed via chocolatey

I faced the same problem in our IIS app:

For a .net 4.8 WCF service I was getting this error because i hadn't (also) set the httpRuntime version.

Without the httpRuntime set i was getting the error whenever a secured .net tcp binding was present.

I had already setup the required permissions in mmc.exe -> add snap-in -> certificates -> personal -> all tasks -> manage private keys -> add [computer name]\IIS_IUSRS (all my application pools are ApplicationPoolIdentity [default] - which is covered by IIS_IUSRS)

the PrivateKey and PublicKey properties are outdated beginning with NET 4.6. Please use:

After following the accepted answer (specifying KeySpec), the exception changed to System.Security.Cryptography.CryptographicException: Invalid provider type specified.. I resolved that exception by giving my web application access to the private key (IIS_IUSRS). I discovered that this would also fix the problem with my original certificate. So before generating and deploying new certificates, check the private key's permissions as well.

The problem is your code is not able to read the PFX file. convert the pfx file to RSA format by doing the below steps.

use the password 123456 below to have a quick solution.

rename your pfx to 'my.pfx' file to make it simple and put it in "C:\Certi" make sure you have open SSL installed already in the system. open cmd in windows system and type --> OpenSSL Stay cool and just run these ones by one --> copy paste. *Note

if you face issue in the 3rd command go here https://decoder.link/converter
Click PKC#12 To PEM upload your pfx file and get it converted online. download the zip file. it contains 3 files. just copy ".key" file and rename it as my.key and put in "C:\Certi"

This error went away after i removed the certificate from the store and imported it again from the .pfx file, using the Certificate Import Wizard (double-click the .pfx file) and an extra import option.

After checking the import option (same step where password is entered):

"Mark this key as exportable. This will allow you to back up or transport your keys at a later time."

The privatekey could now be accessed from code without any errors.

I also explicitly select the "Personal" store on the 2nd to last step, but I don't think this matters.

I tried everything in this post, but for me the solution was:

After experiencing this issue on some computers in a security-critical environment, I found that, contrary to several answers, updating the Cryptographic Service Provider (CSP) of the certificate from the old CAPI standard to the new CNG standard resolved this issue.

The security policies probably restricted the use of CSPs relying on deprecated cryptographic algorithms.

Updating the CSP to Microsoft Software Key Storage Provider based on these instructions fixed the issues.

Not the answer you're looking for? Browse other questions tagged c# windows certificate mmc certificate-store or ask your own question.