Why do my threads sometimes “stutter”?

I am trying to write some multithreaded code to read from a DAQ device and render the captured signal at the same time:

Sometimes this will work fine, but usually I get really bad stuttering. I had render () and capture () print a line upon each loop iteration, and then colored the lines such that red is from render () and blue is from capture (): 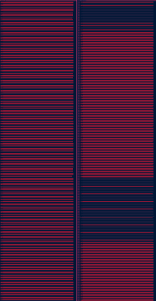 I had roughly the equivalent program in C using openMP and the performance was always smooth:

At least, both the C and C++11 versions look equivalent to me, but I can't figure out why the stuttering is happening in the C++11 version.

I can't post a SSCCE because the daq.* routines all depend on the NI DAQ library, but it may be worth noting that daq.record () blocks until the physical device is finished reading, and the NI DAQ lib itself spawns several threads when it starts.

I've tried implementing atomic flags in various configurations and changing function call orders and nothing seems to have an effect.

What is going on here, and how can I control it?

update: increasing the sampling rate of the DAQ alleviates the problem, which leads me to strongly suspect that this does have something to do with the fact that daq.record () is a blocking call.

As people in the comments have mentioned you don't have much control of the scheduling. What probably can help you even more is to turn away from spin locks and use conditions. This will force put the render thread into sleep if it went too fast and processed all the data the capture thread has produced. You can look at this example for 1 iteration. In your case every time more data becomes available from the capture thread, you need to call notify_one(). You can use the version of wait that takes only 1 parameter for your case.

Doing it this way will also consume less CPU resources, as the render thread will go to sleep when there is no data to process.

Not the answer you're looking for? Browse other questions tagged c++ multithreading c++11 openmp or ask your own question.

1019
Why can't variables be declared in a switch statement?
1959
Why can templates only be implemented in the header file?
2903
Why is “using namespace std;” considered bad practice?
1455
Why do we need virtual functions in C++?
2328
Why are elementwise additions much faster in separate loops than in a combined loop?
1587
Why does changing 0.1f to 0 slow down performance by 10x?
1993
Why is reading lines from stdin much slower in C++ than Python?
25621
Why is processing a sorted array faster than processing an unsorted array?
1724
Why should I use a pointer rather than the object itself?
1
Prevent multiple threads to access only one element of an array (instead of whole the array)