How can I trim leading and trailing white space?

I am having some trouble with leading and trailing white space in a data.frame.

For example, I look at a specific row in a data.frame based on a certain condition:

I was wondering why I didn't get the expected output since the country Austria obviously existed in my data.frame. After looking through my code history and trying to figure out what went wrong I tried:

All I have changed in the command is an additional white space after Austria.

Further annoying problems obviously arise. For example, when I like to merge two frames based on the country column. One data.frame uses "Austria " while the other frame has "Austria". The matching doesn't work.

So far I used to write a simple Perl script which removes the whites pace, but it would be nice if I can somehow do it inside R.

As of R 3.2.0 a new function was introduced for removing leading/trailing white spaces:

Probably the best way is to handle the trailing white spaces when you read your data file. If you use read.csv or read.table you can set the parameterstrip.white=TRUE.

If you want to clean strings afterwards you could use one of these functions:

To use one of these functions on myDummy$country:

To 'show' the white space you could use:

which will show you the strings surrounded by quotation marks (") making white spaces easier to spot.

To manipulate the white space, use str_trim() in the stringr package. The package has manual dated Feb 15, 2013 and is in CRAN. The function can also handle string vectors.

A simple function to remove leading and trailing whitespace:

Ad 1) To see white spaces you could directly call print.data.frame with modified arguments:

See also ?print.data.frame for other options.

Use grep or grepl to find observations with white spaces and sub to get rid of them.

Removing leading and trailing blanks might be achieved through the trim() function from the gdata package as well:

I'd prefer to add the answer as comment to user56's, but I am yet unable so writing as an independent answer.

Another option is to use the stri_trim function from the stringi package which defaults to removing leading and trailing whitespace:

Another related problem occurs if you have multiple spaces in between inputs:

You can then easily split this string into "real" tokens using a regular expression to the split argument:

I created a trim.strings () function to trim leading and/or trailing whitespace as:

The best method is trimws().

The following code will apply this function to the entire dataframe.

I tried trim(). It works well with white spaces as well as the '\n'.

After this, you'll need to force R not to recognize "Austria " as a level. Let's pretend you also have "USA" and "Spain" as levels:

It is a little less intimidating than the highest voted response, but it should still work.

For whom it may be of interest, here a simple benchmarking. This is of course not capturing all weird cases, but so far we are still lacking the example where str_trim removes whitespace and trimws doesn't (see Richard Telford's comment to this answer). Doesn't seem to matter - the gsub option seems to be fastest :) 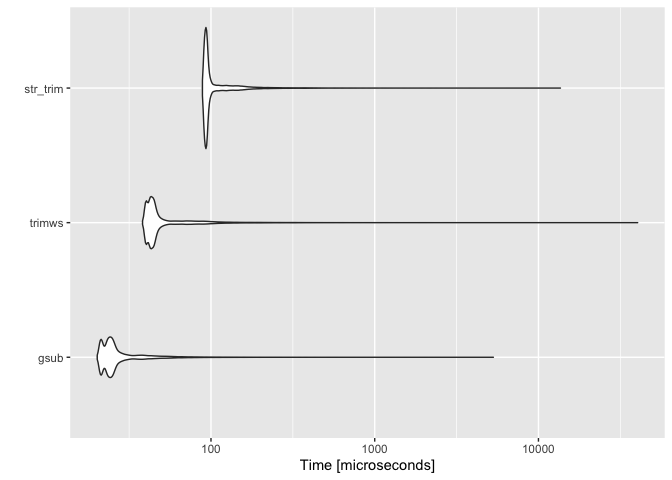 Not the answer you're looking for? Browse other questions tagged r whitespace trim removing-whitespace r-faq or ask your own question.

8
removing trailing spaces with gsub in R
1
Remove Trailing Whitespace and Consolidate Potentially Duplicated Factors in R
2
how to delete spaces in specific elements of a vector?
1
How to remove leading white space
2
How can I reset factors of a vector after modify strings?
0
how to remove double white space at the end of string in R?
0
How to remove whitespaces at the beginning of character using regexes in R?
0
Removing the white space at the start of each variable IN A LIST
0
Getting rid of spaces after text in R
1
How to suppress blank space before a value
See more linked questions