When is the thread pool used?

Now, by contrast, when I use Mongoose to talk to MongoDB, DB reads are an expensive I/O operation. Node seems to be able to delegate the work to a thread and receive the callback when it completes; the time taken to load from the DB does not seem to block the system.

Your understanding of how node works isn't correct... but it's a common misconception, because the reality of the situation is actually fairly complex, and typically boiled down to pithy little phrases like "node is single threaded" that over-simplify things.

For the moment, we'll ignore explicit multi-processing/multi-threading through cluster and webworker-threads, and just talk about typical non-threaded node.

Node runs in a single event loop. It's single threaded, and you only ever get that one thread. All of the javascript you write executes in this loop, and if a blocking operation happens in that code, then it will block the entire loop and nothing else will happen until it finishes. This is the typically single threaded nature of node that you hear so much about. But, it's not the whole picture.

Certain functions and modules, usually written in C/C++, support asynchronous I/O. When you call these functions and methods, they internally manage passing the call on to a worker thread. For instance, when you use the fs module to request a file, the fs module passes that call on to a worker thread, and that worker waits for its response, which it then presents back to the event loop that has been churning on without it in the meantime. All of this is abstracted away from you, the node developer, and some of it is abstracted away from the module developers through the use of libuv.

As pointed out by Denis Dollfus in the comments (from this answer to a similar question), the strategy used by libuv to achieve asynchronous I/O is not always a thread pool, specifically in the case of the http module a different strategy appears to be used at this time. For our purposes here it's mainly important to note how the asynchronous context is achieved (by using libuv) and that the thread pool maintained by libuv is one of multiple strategies offered by that library to achieve asynchronicity.

On a mostly related tangent, there is a much deeper analysis of how node achieves asynchronicity, and some related potential problems and how to deal with them, in this excellent article. Most of it expands on what I've written above, but additionally it points out:

If you want traditional multi-processing or multi-threading in node, you can get it through the built in cluster module or various other modules such as the aforementioned webworker-threads, or you can fake it by implementing some way of chunking up your work and manually using setTimeout or setImmediate or process.nextTick to pause your work and continue it in a later loop to let other processes complete (but that's not recommended).

Please note, if you're writing long running/blocking code in javascript, you're probably making a mistake. Other languages will perform much more efficiently.

This is not really accurate. Node.js has only a single "worker" thread that does javascript execution. There are threads within node that handle IO processing, but to think of them as "workers" is a misconception. There are really just IO handling and a few other details of node's internal implementation, but as a programmer you cannot influence their behavior other than a few misc parameters such as MAX_LISTENERS.

There is no sleep mechanism in JavaScript. We could discuss this more concretely if you posted a code snippet of what you think "sleep" means. There's no such function to call to simulate something like time.sleep(30) in python, for example. There's setTimeout but that is fundamentally NOT sleep. setTimeout and setInterval explicitly release, not block, the event loop so other bits of code can execute on the main execution thread. The only thing you can do is busy loop the CPU with in-memory computation, which will indeed starve the main execution thread and render your program unresponsive.

Rule of thumb is always use the asynchronous APIs. The valid reasons to use the sync APIs are for initialization code in a network service before it is listening for connections or in simple scripts that do not accept network requests for build tools and that kind of thing.

Thread pool how when and who used:

First off when we use/install Node on a computer, it starts a process among other processes which is called node process in the computer, and it keeps running until you kill it. And this running process is our so-called single thread.

So let's understand exactly what happens in the single thread of nodejs when you start your node application. At first the program is initialized, then all the top-level code is executed, which means all the codes that are not inside any callback function (remember all codes inside all callback functions will be executed under event loop).

After that, all the modules code executed then register all the callback, finally, event loop started for your application. 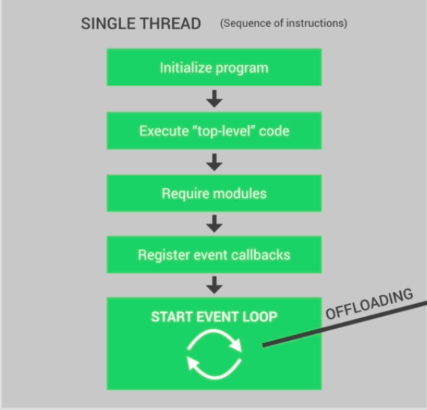 So as we discuss before all the callback functions and codes inside those functions will execute under event loop. In the event loop, loads are distributed in different phases. Anyway, I'm not going to discuss about event loop here.

Well for the sack of better understanding of Thread pool I a requesting you to imagine that in the event loop, codes inside of one callback function execute after completing execution of codes inside another callback function, now if there are some tasks are actually too heavy. They would then block our nodejs single thread. And so, that's where the thread pool comes in, which is just like the event loop, is provided to Node.js by the libuv library.

So the thread pool is not a part of nodejs itself, it's provided by libuv to offload heavy duties to libuv, and libuv will execute those codes in its own threads and after execution libuv will return the results to the event in the event loop. 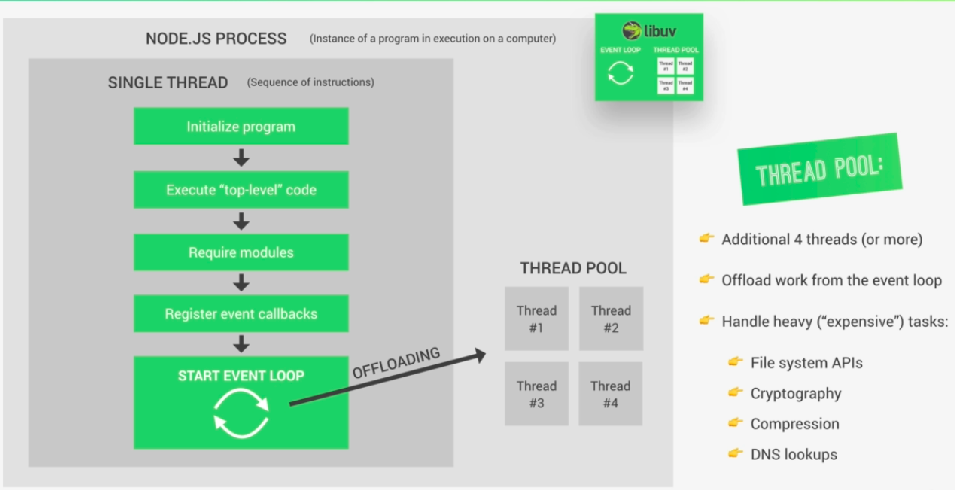 Thread pool gives us four additional threads, those are completely separate from the main single thread. And we can actually configure it up to 128 threads.

So all these threads together formed a thread pool. and the event loop can then automatically offload heavy tasks to the thread pool.

The fun part is all this happens automatically behind the scenes. It's not us developers who decide what goes to the thread pool and what doesn't.

There are many tasks goes to the thread pool, such as

This misunderstanding is merely the difference between pre-emptive multi-tasking and cooperative multitasking...

The sleep turns off the entire carnival because there is really one line to all the rides, and you closed the gate. Think of it as "a JS interpreter and some other things" and ignore the threads...for you, there is only one thread, ...

Not the answer you're looking for? Browse other questions tagged node.js events or ask your own question.

287
How is Node.js inherently faster when it still relies on Threads internally?
2194
How to decide when to use Node.js?
2647
Find the version of an installed npm package
80
How to sleep the thread in node.js without affecting other threads?
2312
How to update each dependency in package.json to the latest version?
2495
What's the difference between dependencies, devDependencies and peerDependencies in npm package.json file?
2685
What is the --save option for npm install?
4324
What's the difference between tilde(~) and caret(^) in package.json?
570
How, in general, does Node.js handle 10,000 concurrent requests?
2024
Do I commit the package-lock.json file created by npm 5?