I've been spoiled by Visual studio 2008 and Eclipse and have to do a little maintainence work on a VB6 app.

Does anyone know of an alternative/ updated IDE for VB6?

A rewrite is not an option I'm just fixing a couple of bugs and it's a big codebase.

I have never heard of an alternative IDE for Vb6. However, these two (free) VB6 add-ins are indispensable and will make your life easier - especially if there is a lot of code. They are equally effective for VBA in Microsoft Office.

And SmartIndenter, which takes care of all the auto-indenting. It does one thing and it does it well. 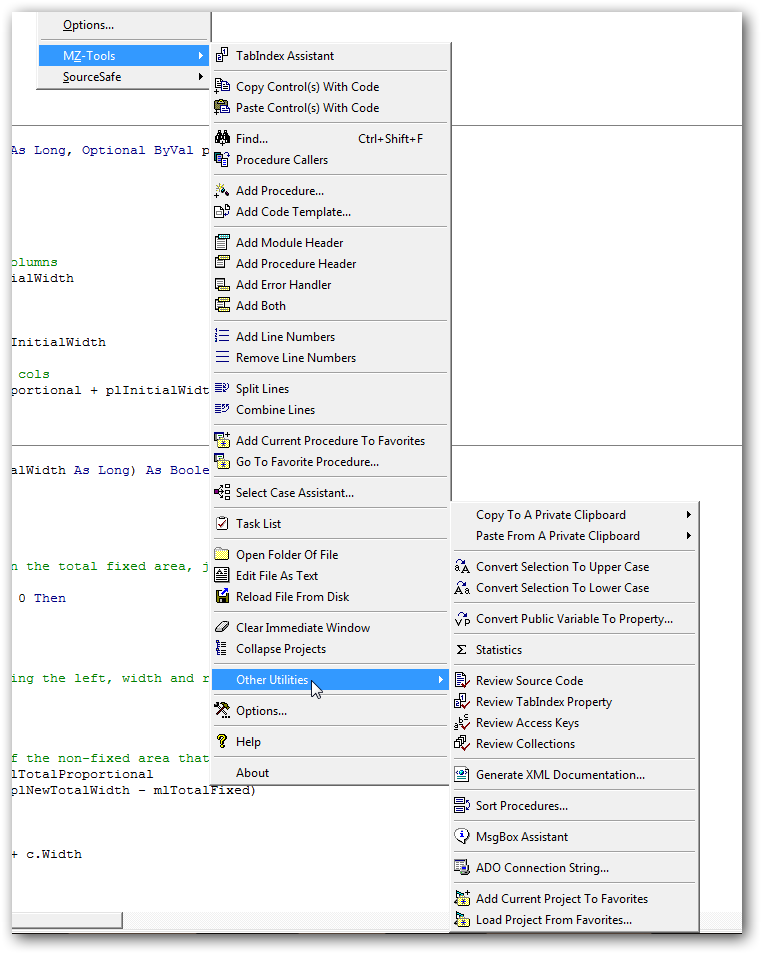 Some time ago I did some research and nothing came up. I don't believe you have have any real alternatives...

But you could consider checking this out: http://www.axtools.com/products/cs2k3vb_screenshots.htm It looks quite promising.

But for things like GUI changes and debugging there is really no choice but to revert back to the VB6 IDE.

Here is the commands needed to run the build from the DOS prompt:

FWIW the Zeus IDE has the ability to import a VB Project file and display the project details into project/workspace tree. It will also run the build an capture the output.

Its a work in progress, but if like me you have some living dead vb6 programs to maintain, it's... intriguing.

Except there's no GUI editor, no debugging. I fear these points (especially debugging) are deal breakers. (Of course, I understand that not everything is possible).

Yeah, no alternative IDEs to VB6 afaik. But one indispensable add-in I used was CodeHelp. It gives you tabs! for the windows, easy tab ordering, fullscreen switcher and maybe a mousewheel add-in. Check it out from the Planet Source Code page. And be sure to check the comments for a download to a setup file as I had problems with the source code and the author's site.

I used Visual Assist X while programming in VB6. It's a code coloring add-in.
A must have, once you got used to VS2005+
I don't know if VB6 is still supported in current version, so you should take a look and see for yourself (and perhaps get an older version)

Not the answer you're looking for? Browse other questions tagged vba vb6 ide vbe or ask your own question.

0
How to enhance VB6 programming experience?
30
Your favorite Visual Basic 6.0 tools and tips
61
Stop Visual Basic 6 from changing my casing
5
Detect file changes outside the Visual Basic 6 IDE?
0
With which IDE develope in VB6?
0
Is there a way to compile VB6 in 2018?

3
Migrate VB6 Data Report to Crystal Report within VS.NET
15
Using Git with VB6
4
VB6 crashes after build
2
How to replace Sheridan 3D controls in VB6?
2
Contain a VB6 form in a .Net MDI
8
Concatenating strings in VBA
3
How do I force VB6 to POST using TSL encryption?