How to write WinForms code that auto-scales to system font and dpi settings?

Intro: There's a lot of comments out there that say "WinForms doesn't auto-scale to DPI/font settings well; switch to WPF." However, I think that is based on .NET 1.1; it appears they actually did a pretty good job of implementing auto-scaling in .NET 2.0. At least based on our research and testing so far. However, if some of you out there know better, we'd love to hear from you. (Please don't bother arguing we should switch to WPF... that's not an option right now.)

Design Guidelines we have identified so far:

Are any of those incorrect or inadequate? Any other guidelines we should adopt? Are there any other patterns that need to be avoided? Any other guidance on this would be very appreciated.

Controls which do not support scaling properly:

My experience has been fairly different to the current top voted answer. By stepping through the .NET framework code and perusing the reference source code, I concluded that everything is in place for auto-scaling to work, and there was only a subtle issue somewhere messing it up. This turned out to be true.

If you create a properly reflowable / auto-sized layout, then almost everything works exactly like it should, automatically, with the default settings used by Visual Studio (namely, AutoSizeMode = Font on the parent form, and Inherit on everything else).

The only gotcha is if you have set the Font property on the form in the designer. The generated code will sort the assignments alphabetically, which means that AutoScaleDimensions will be assigned before Font. Unfortunately, this completely breaks WinForms auto scaling logic.

The fix is simple though. Either don't set the Font property in the designer at all (set it in your form constructor), or manually reorder these assignments (but then you have to keep doing this every time you edit the form in the designer). Voila, nearly perfect and fully automatic scaling with minimal hassle. Even the form sizes are scaled correctly.

I will list known problems here as I encounter them:

Starting with the .NET Framework 4.7, Windows Forms includes enhancements for common high DPI and dynamic DPI scenarios. These include:

To support it, add an application manifest to your application and signal that your app supports Windows 10:

This PerMonitorV2 is new since Windows 10 Creators Update:

Also known as Per Monitor v2. An advancement over the original per-monitor DPI awareness mode, which enables applications to access new DPI-related scaling behaviors on a per top-level window basis.

Now you can subscribe to 3 new events to get notified about DPI changes:

You also have 3 helper methods about DPI handling/scaling:

If you still see issues, you can opt-out of the DPI improvements via app.config entries.

If you don't have access to source code, you can go to application properties in Windows Explorer, go to compatibility and select System (Enhanced) 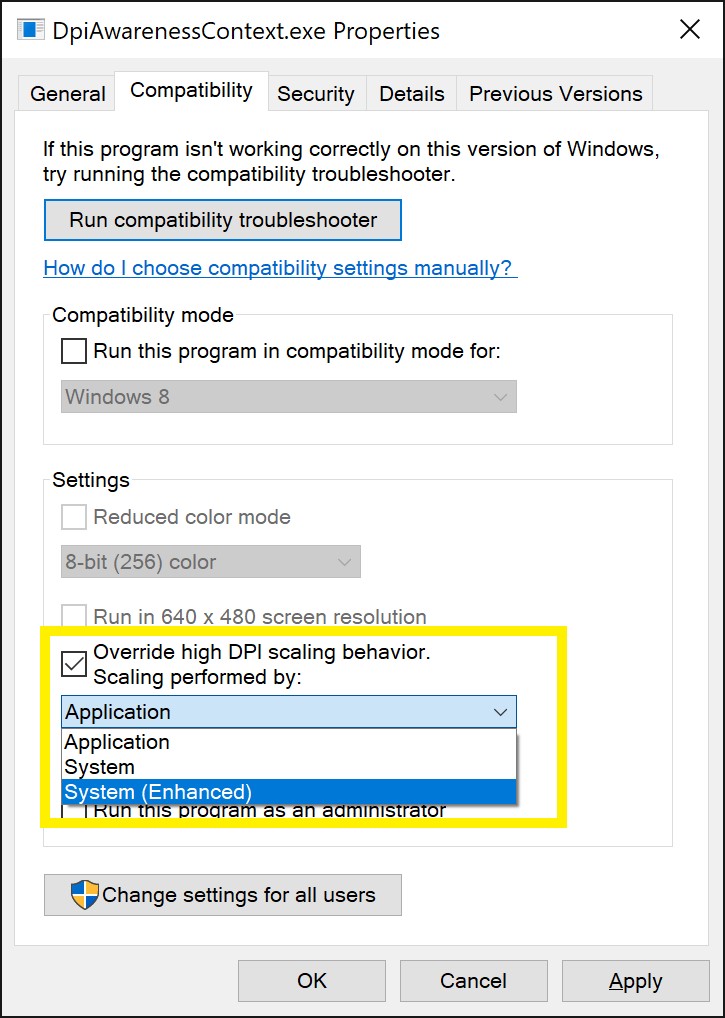 Do all those steps and you should get a better DPI experience for WinForms applications. But remember, you need to target your app for .net 4.7 and need at least Windows 10 Build 15063 (Creators Update). In next Windows 10 Update 1709, we might get more improvements.

A guide I wrote at work:

WinForms works in pixels. Text will be scaled according to the system dpi but it will often be cropped by an unscaled control. To avoid such problems, you must eschew explicit sizing and positioning. Follow these rules:

I found it to be very hard to get WinForms to play nice with high DPI. So, I wrote a VB.NET method to override the form behavior:

I recently came across this problem, especially in combination with Visual Studio rescaling when the editor is opened on high-dpi system. I found it best to keep AutoScaleMode = Font, but to set the Forms Font to the default font, but specifying the size in pixel, not point, i.e.: Font = MS Sans; 11px. In code, I then reset the font to the default: Font = SystemFonts.DefaultFont and all is fine.

Just my two cents. I thought I share, because “keeping AutoScaleMode=Font”, and “Set font size in pixel for the Designer” was something I did not find on the internet.

In addition to the anchors not working very well: I would go a step farther and say that exact positioning (aka, using the Location property) does not work very well with the font scaling. I've had to address this issue in two different projects. In both of them, we had to convert the positioning of all the WinForms controls to using the TableLayoutPanel and FlowLayoutPanel. Using the Dock (usually set to Fill) property inside the TableLayoutPanel works very well and scales fine with the system font DPI.

I had to go through and fix scaling on a whole bunch of WinForms programs, at least 20 of them, written by different people in different styles. Lots of user controls, splitters, anchors, docking, panels, custom controls, dynamic layout code, etc. It took a lot of experimenting, but I think I've come up with a good way of handling it.

This answer is what got me started in the right direction: Trying to make WinForms look good in 4K but forms too large after using AutoScaleMode.Dpi?

The problem is the LayoutManager tends to mangle the layout if you have anything slightly complicated. It's really a problem with calling SuspendLayout() and then doing stuff and then ResumeLayout(). (This also plays havoc with anchors when you mix user controls with TabControl. But that's a separate issue.)

The key is to move the AutoScaleDimension and AutoScaleMode properties on the form outside of the SuspendLayout()/ResumeLayout(), so everything will be properly laid out before it scales. Since the form designer orders statements however it wants to, just remove those two lines from the .Designer.cs file, and move them to right after the InitializeComponent() method in the constructor.

The other important part is to set all your user controls AutoScaleMode to Inherit, not font. That way everything gets scaled all at once instead of doing a scale in the user control, and then rescaling stuff when it's added to the form.

Before changing AutoScaleMode on the form, I visit all the controls recursively, and anything which isn't docked and has an anchor other than Top|Left, I temporarily set the anchor to Top|Left, and then restore it back to its original value after setting AutoScaleMode.

Doing those three things gets me about 90% of the way, and almost everything works automagically. Together, these 3 things ensure that everything is scaled one time, all together, and to the same proportions. Any deviation from this pattern seems to lead to chaos in the layout.

It's also a good idea to PInvoke user32.dll SetProcessDPIAware() at the beginning of the application. This seems to allow programmatic scaling to work even at 150%. I haven't had any luck making it behave properly when setting SetProcessDpiAwareness() or SetProcessDpiAwarenessContext(), they both seem to lead to layout chaos no matter what I do.

Not the answer you're looking for? Browse other questions tagged c# .net winforms fonts dpi or ask your own question.

1
Win10 monitor 3840x2160 resolution 300% Visual studio 2017 design Form different with run form
75
Creating a DPI-Aware Application
38
How to control the font DPI in .NET WinForms app
6
Form Looks Different on Another Computer
6
Windows Forms application on Windows 10 not scaling properly
6
WinForms window changes dimensions when it encounters an async call
5
How do I fix DPI scaling issues for Visual Studio 2017 Windows Forms
3
Make forms fit to every size of screen
0
C# - ListView Column text size is not the same on each computer
4
How to make toolbar icons scale according to dpi without blurring?
See more linked questions