I have the following code

If focus_force() is not working you can try doing:

It's essentially the same thing, just written differently. I just tested it on python 2.7.

root.focus_force() wouldn't work but the above method did.

Solution for Windows is a littlebit tricky - you can't just steal the focus from another window, you should move your application to foreground somehow. But first, I suggest you to consume a littlebit of windows theory, so we're able to confirm, that this is what we want to achieve.

As I mentioned in comment - it's a good opportunity to use the SetForegroundWindow function (check restrictions too!). But consider such stuff as a cheap hack, since user "owns" foreground, and Windows would try to stop you at all cost:

An application cannot force a window to the foreground while the user is working with another window. Instead, Windows flashes the taskbar button of the window to notify the user.

Also, check a remark on this page:

The system automatically enables calls to SetForegroundWindow if the user presses the ALT key or takes some action that causes the system itself to change the foreground window (for example, clicking a background window).

Some links and examples:

Not sure what issue you face. But below is sample code which worked great for me.

This was tested using Latest Python 3.6 on Windows 10.

The result was that after running the program, I could just start typing and and he input would go to the first text box

Note: this is Windows specific. This focuses the whole main window. Essentially forcing an alt-tab to reach the window.

None of these answers worked for me, the tk window would appear on top of everything with the -topmost flag, my input box would have focus, but the window itself wouldn't, which meant that typing wouldn't appear in the tk window. It looks like like this: 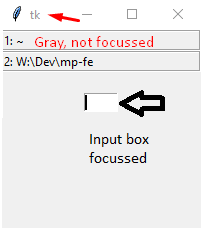 What helped was adding a call to the Windows API to steal focus:

Disclaimer: Stealing focus is bad behaviour, so only use it if you must and if it makes sense, e.g. input box the user will instantly type into.

It works for me. I am on Macos Mojave, python 3.6.4. Place this code before root.mainloop()

When you open -a an application that already be opened, this application will be focus on.

For Linux (Ubuntu 16.04.6 LTS) I tried many suggestions including .grab which broke things. In the end I used:

It's not really "stealing" focus because I have a button on the main window defined as:

After clicking this button the text is changed to:

40
What are the differences between BringWindowToTop, SetForegroundwindow, SetWindowPos etc.?
4
Tkinter simpledialog boxes not getting focus in Windows 10 with Python3
5
Intercepting a window's attempt to steal global focus on Windows
2
How to wrap the SendInput function to python using ctypes
0
If I programmed a window to close after opening a new one why doesn't it close?
1
Python how to always keep focus on window in Tkinter?
1
Need to avoid opening multiple terminals using Selenium and TKinter - Python
0
How do you focus a window after launching another application in tkinter?
1
How can I select window on hover? (Tkinter)
1
Keep subprocess as topmost on Linux OS in python3
See more linked questions