Does assignment with a comma work? 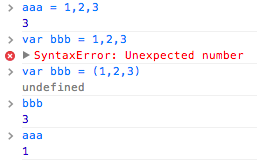 There's a lot going on here, but basically, it comes down to the comma operator.

The comma operator evaluates both of its operands (from left to right) and returns the value of the second operand.

So aaa is implicitly declared and assigned a value of 1. Notice that the output on the console is the result of the last statement, 3.

Is a syntax error because commas in variable declarations are used to declare multiple variables in a single line. As the MDN article points out,

Note that the comma in the var statement is not the comma operator, because it doesn't exist within an expression. Rather, it is a special character in var statements to combine multiple of them into one.

So this code is roughly equivalent to:

Of course, 2 is not a valid identifier, so it fails at that point.

Is very similar to the first, except because the numeric values are wrapped in a parentheses, they are evaluated first. So this is rougly equivalent to:

Comma has multiple uses in Javascript. In the expression:

it's an operator that simply returns its right-hand argument. But it's also part of the syntax of var declarations, which are:

(where [...] means that part is optional). Your var declaration is missing the variable names after the commas, so it doesn't parse. You could get the effect you wanted with:

The parentheses force the commas to be treated as operators rather than delimiters between variable declarations.

In your examples, the comma is used in two contexts:

The syntax of var statement is:

Here, comma is used to separate variable name-value pairs. The following will not work because a variable name cannot start with a digit (see identifier names):

The comma operator evaluates both of its operands (from left to right) and returns the value of the second operand. The following expressions work as follows:

In the first case:

The var keyword tells the Javascript compiler that the next thing after a , should be another variable name. It isn't finding on, so it dies and gags.

While using commas to separate expressions isn't common, it is sometimes useful in things like for looks.

Not the answer you're looking for? Browse other questions tagged javascript syntax or ask your own question.

0
Why does JavaScript comma operator require parenthesis when used with function applications?
579
What characters are valid for JavaScript variable names?