VS2013 permanent CPU usage even though in idle mode

Are you getting a similar behaviour after updating?

Edit 1: I'm using git and python tools for vs, so there might be some conflicts after Update 1.

Edit 2: The git integration in VS2013 is buggy. I ran a profiler on devenv.exe and git2-msvstfs.dll takes most of cpu usage although it should be idle. I sent a failure notice to MS. If you have the same problem please vote for this: http://connect.microsoft.com/VisualStudio/feedback/details/844616/vs2013-update-1-cpu-usage-not-normal 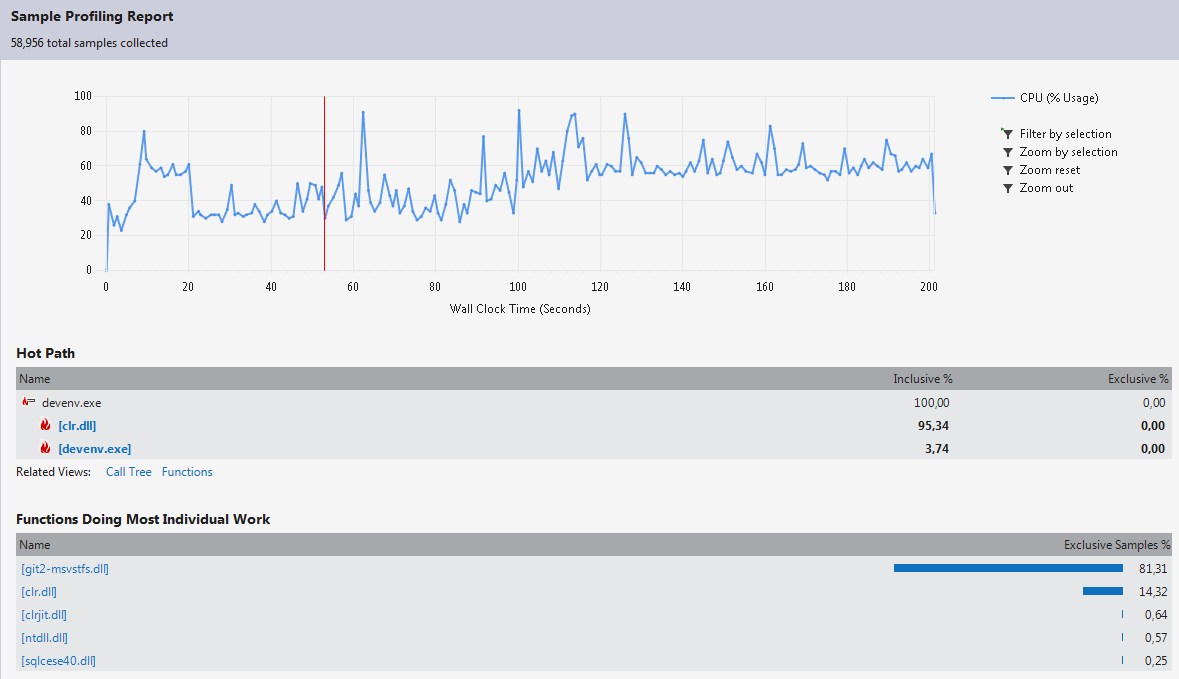 Edit 4: Updates 3 & 4 were released and CPU usage goes crazy due to multiple causes (not only git dll module). Disabling Browser Link as in one of the below answers seems to fix the problem.

For me (VS 2013 update 4) the solution was to disable Browser Link as specified here:

One can disable git plug-in from Visual Studio 2013 in this way:

Use other git clients to manage your repositories.

We fixed it by opening the VS in SafeMode. Add / SafeMode to the initiator.

In my case, it was the inclusion of References to the solution that caused the high CPU usage. The project was an IronPython package that also used some DLLs. Adding the DLLs to the References was fine. The first time that a DLL was opened in the Object Browser then CPU hit 25% (1 core) and stayed there. Deleting all the References returned the CPU to normal again.

Yet Another Solution: Delete any objects under the project References.

In my case, I normally run several copies of Visual Studio at the same time. I've found, if I start the 2nd (or 3rd) copy of Visual Studio BEFORE the 1st (or 2nd) copy has completely loaded and settled down, I get a DEVENV stuck at 100% CPU no matter what I do after that. I have to close all copies, and open again.

I hope this helps someone, it was driving me nuts.

Had a similar problem with vs2015 - deleting the .suo solution file fixed it for me so far.

42
Visual Studio 2013 Update 2 maxes out core
6
BrowserLink swamps browsers with requests and eats 100% CPU
0
Why does Visual Studio hog all my computer's resources?