I am trying to import a large .sql data file using phpMyAdmin in XAMPP. However this is taking a lot of time and I keep getting:

And the file is about 1.2 million lines long.

The file is about 30MB big, so it is not that big. I don't really understand why it is taking so long.

The is the config file for php.ini in xampp, for some reason i still get

There's a configuration variable within the phpMyAdmin directory that you can find in libraries\config.default.php called $cfg['ExecTimeLimit'] that you can set to whatever maximum execution time you need.

Well, to get rid of this you need to set phpMyadmin variable to either 0 that is unlimited or whichever value in seconds you find suitable for your needs. Or you could always use CLI(command line interface) to not even get such errors(For which you would like to take a look at this link.

Now about the error here, first on the safe side make sure you have set PHP parameters properly so that you can upload large files and can use maximum execution time from that end. If not, go ahead and set below three parameters from php.ini file,

Once that's done get back to finding phpMyadmin config file named something like "config.default.php". On XAMPP you will find it under "C:\xampp\phpMyAdmin\libraries" folder. Open the file called config.default.php and set :

Once set, restart your MySQL and Apache and go import your database.

You're trying to import a huge dataset via a web interface.

By default PHP scripts run in the context of a web server have a maximum execution time limit because you don't want a single errant PHP script tying up the entire server and causing a denial of service.

For that reason your import is failing. PHPMyAdmin is a web application and is hitting the limit imposed by PHP.

You could try raising the limit but that limit exists for a good reason so that's not advisable. Running a script that is going to take a very long time to execute in a web server is a very bad idea.

PHPMyAdmin isn't really intended for heavy duty jobs like this, it's meant for day to day housekeeping tasks and troubleshooting.

Your best option is to use the proper tools for the job, such as the mysql commandline tools. Assuming your file is an SQL dump then you can try running the following from the commandline:

Or if you aren't comfortable with commandline tools then something like SQLYog (for Windows), Sequel Pro (for Mac), etc may be more suitable for running an import job

Set Only 3 Parameters from php.ini file of your server

After all set, restart your server and import again your database.

This worked for me. If you got Maximum execution time 300 exceeded in DBIMysqli.class.php file. Open the following file in text editor C:\xampp\phpMyAdmin\libraries\config.default.php then search the following line of code:

Maximum execution time in seconds (0 for no limit).

And make this below changes in php.ini file as per file size.

But make sure 'post_max_size' and 'memory_limit' should be more than upload_max_filesize.

Is it a .sql file or is it compressed (.zip, .gz, etc)? Compressed formats sometimes require more PHP resources so you could try uncompressing it before uploading.

However, there are other methods you can try also. If you have command-line access, just upload the file and import with the command line client mysql (once at the mysql> prompt, use databasename; then source file.sql).

Otherwise you can use the phpMyAdmin "UploadDir" feature to put the file on the server and have it appear within phpMyAdmin without having to also upload it from your local machine.

This link has information on using UploadDir and this one has some more tips and methods.

you must change php_admin_value max_execution_time in your Alias config (\XAMPP\alias\phpmyadmin.conf)

After trying many things with no success, I've managed to get SSH access to the server, and import my 80Mb database with a command line, instead of phpMyAdmin. Here is the command:

It's much easier to import big databases, if you are running xammp on windows, the path for mysql.exe is C:\xampp\mysql\bin\mysql.exe

1-make a search in your local drive and type "php.ini" 2-you may see many files named php.ini you should choose the one that fits with your php version (see localhost) 3-open the php.ini file make a search on "max_execution_time" then make it equal to "-1" to make it unlimited

If you are using the laragon and your database is phpMyAdmin the process is the same for tackle this error.

Open laragon right-click on it and open php.ini file 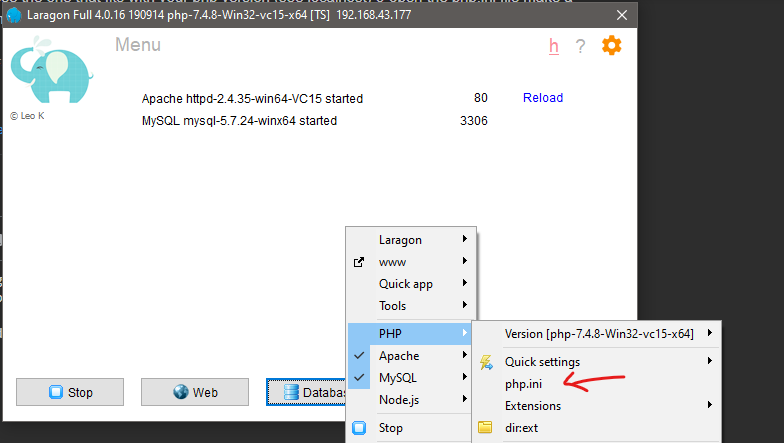 set these value accordingly to your needs

I hope it would solve your problem for laragon environment 🙏 #Happy Coding :)

You have other tools on a server to handle the import.

a) If you have a server admin system like Plesk, use there database import tool.

b) use ssh commands to make database dump or to write databases directly in mysql via ssh. Commands below.

Write a database to mysql:

Best solution for this error when i tried some points. Follow this steps to solve this issue:

You can increase the limit:

(Note that this script can cause high memory usage as well, so you probably have to increase that as well)

Other possible solution: Chunk your sql file, and process it as parts. I assume, it is not one big SQL query, is it?

Update: As @Isaac pointed out, this is about PHPMyAdmin. In this case set max_execution_timeout in php.ini. (The location depends on your environment)

And in your mysql - max_allowed_packet=100M in some cases where queries are too long sql also produce and error "MySQL server has gone away";

Change the values to whatever you need.

Not the answer you're looking for? Browse other questions tagged php mysql sql phpmyadmin xampp or ask your own question.

379
How to export a mysql database using Command Prompt?
39
WAMPServer phpMyadmin Maximum execution time of 360 seconds exceeded
1
phpmyadmin not opening due to change in config file