I have a repository on a github.

Here is the graph:

Here is my action sequence:

Thanks to @Chris, i did it. One small note - on Windows i used:

Just if someone interested, after this i see following: 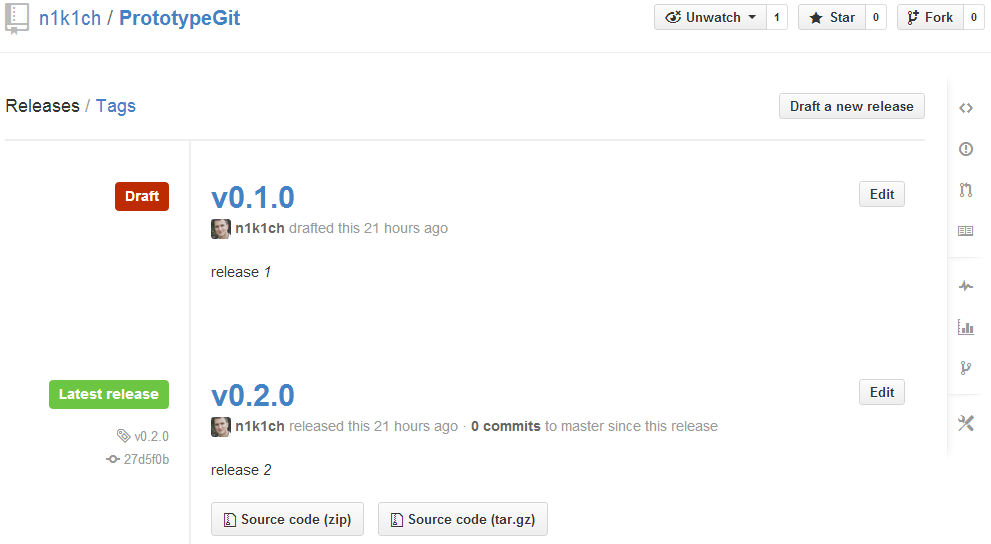 I opened v0.1.0 and press Publish release The result is: 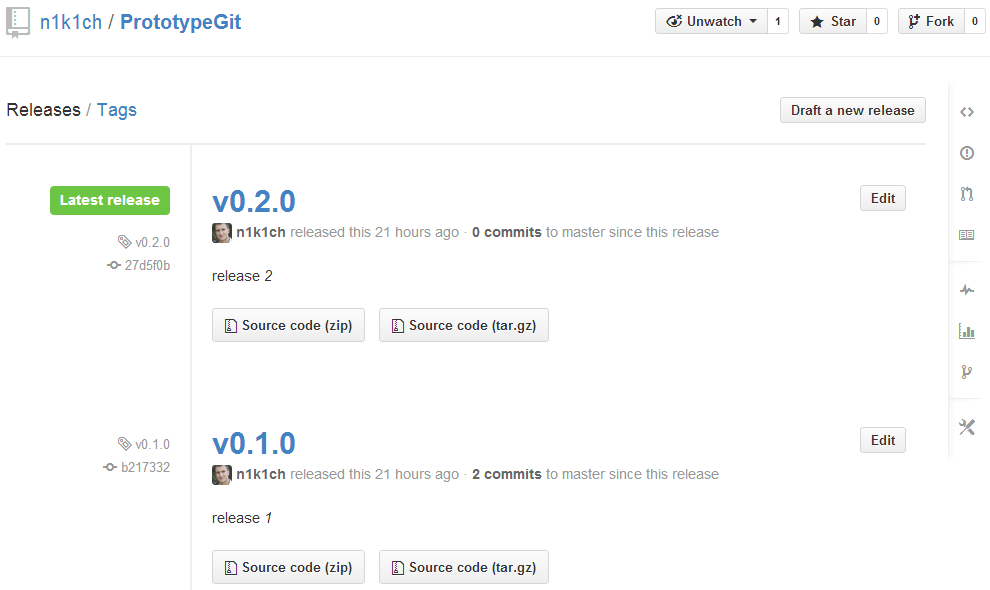 Also i have received the answer from support@github.com:

This is expected behavior. We're going by the date of your v0.1.0 release, not the date of the last commit. Here's a good blog post about changing the date of an annotated tag: http://sartak.org/2011/01/replace-a-lightweight-git-tag-with-an-annotated-tag.html

I am not aware of any way to do this directly in GitHub. The "latest release" is determined from the timestamps on your tags, not from the semantics of their names.

In the past I have solved this problem on my own personal projects by deleting the problematic older tag:

and recreating it with a fake date:

This is documented in the manpage for git-tag:

If you have imported some changes from another VCS and would like to add tags for major releases of your work, it is useful to be able to specify the date to embed inside of the tag object; such data in the tag object affects, for example, the ordering of tags in the gitweb interface.

To set the date used in future tag objects, set the environment variable GIT_COMMITTER_DATE (see the later discussion of possible values; the most common form is "YYYY-MM-DD HH:MM").

Note that this same manpage strongly recommends against reusing the same tag name:

What should you do when you tag a wrong commit and you would want to re-tag?

If you never pushed anything out, just re-tag it. Use "-f" to replace the old one. And you're done.

But if you have pushed things out (or others could just read your repository directly), then others will have already seen the old tag. In that case you can do one of two things:

However, Git does not (and it should not) change tags behind users back. So if somebody already got the old tag, doing a git pull on your tree shouldn't just make them overwrite the old one.

If somebody got a release tag from you, you cannot just change the tag for them by updating your own one. This is a big security issue, in that people MUST be able to trust their tag-names. If you really want to do the insane thing, you need to just fess up to it, and tell people that you messed up. You can do that by making a very public announcement saying:

Ok, I messed up, and I pushed out an earlier version tagged as X. I then fixed something, and retagged the fixed tree as X again.

If you got the wrong tag, and want the new one, please delete the old one and fetch the new one by doing:

to get my updated tag.

You can test which tag you have by doing

Sorry for the inconvenience.

Does this seem a bit complicated? It should be. There is no way that it would be correct to just "fix" it automatically. People need to know that their tags might have been changed.

I would only reuse the same tag if your project is relatively isolated and you can reliably contact everybody who may be using the code.

For more details about deleting remote tags have a look at this question.

3473
How to delete a remote tag?
-1
Assign the latest release in GitHub (not using git)