WiX - Doing a major upgrade on a multi instance install

So, I have a windows service which can have multiple instances installed on a single server. The installer needs to be able to upgrade a single instance. The installer uses Instance Transforms, but I am unsure how to get major upgrades working as I would like.

For a major upgrade to work, my understanding is that I should have the Product Code change, so instances are defined in this form:

The msi can be launched to install a new instance by:

However, after much searching the only way I have found to run an upgrade on a specific instance is this format:

The problem with this is if the product code is autogenerated for major upgrades, then I don't know what it is, so I can't pass in to the command arguments.

Is there a way to launch an upgrade using the Instance's UpgradeCode or InstanceID instead or ProductCode? Since both of those will stay static. Alternatively, can I launch the msi with no arguments, pick an existing instance (via checking registry) in the UI dialog, and set appropriate properties to force the msi into upgrade mode for that instance?

Pretty sure you need the product code for this since the upgrade code identifies a family of products, and not a single one.

Fire up PowerShell and run this command to get a list of installed products with product code:

Here is a different way to get the output in a tabular format (IdentifyingNumber is ProductCode):

You can also find the product code in the Property table of the compiled MSI using Orca (MSI SDK tool): 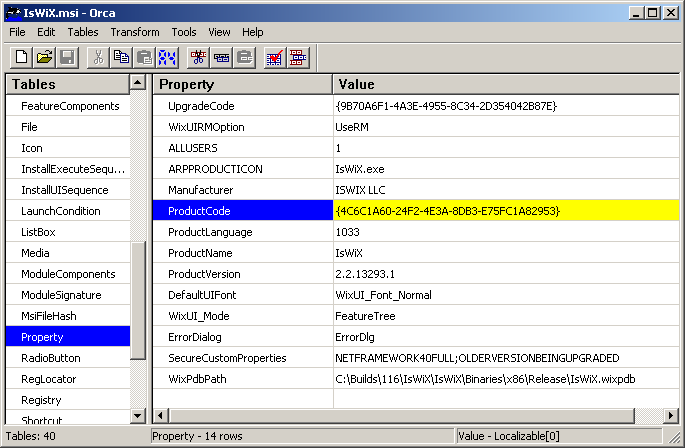 Here is what I've done so far to handle 3 separate instances upgrading:

While my Property Upgrade is a fixed Guid. With this, I can handle 3 instances with their updates separately using this line -for new installs, add MSINEINSTANCE=1- :

Not the answer you're looking for? Browse other questions tagged wix installation windows-installer multiple-instances or ask your own question.