I'm learning Vim and can't wrap my head around the difference between word and WORD.

I got the following from the Vim manual.

A word consists of a sequence of letters, digits and underscores, or a sequence of other non-blank characters, separated with white space (spaces, tabs, ). This can be changed with the 'iskeyword' option. An empty line is also considered to be a word.

A WORD consists of a sequence of non-blank characters, separated with white space. An empty line is also considered to be a WORD.

I feel word and WORD are just the same thing. They are both a sequence of non-blank chars separated with white spaces. An empty line can be considered as both word and WORD.

Question:
What's the difference between them?
And why/when would someone use WORD over word?

I've already done Google and SO search, but their search-engine interpret WORD as just word so it's like I'm searching for Vim word vs word and of course won't find anything useful.

If I do viw ("select inner word") while my cursor is on app in the following line, it selects app:

If I do viW (WORD) while my cursor is at the same place, it selects the whole sequence of characters. A WORD includes characters that words, which are like English words, do not, such as asterisks, slashes, parentheses, brackets, etc.

To supplement the previous answers... I visualise it like this; WORD is bigger than word, it encompasses more... 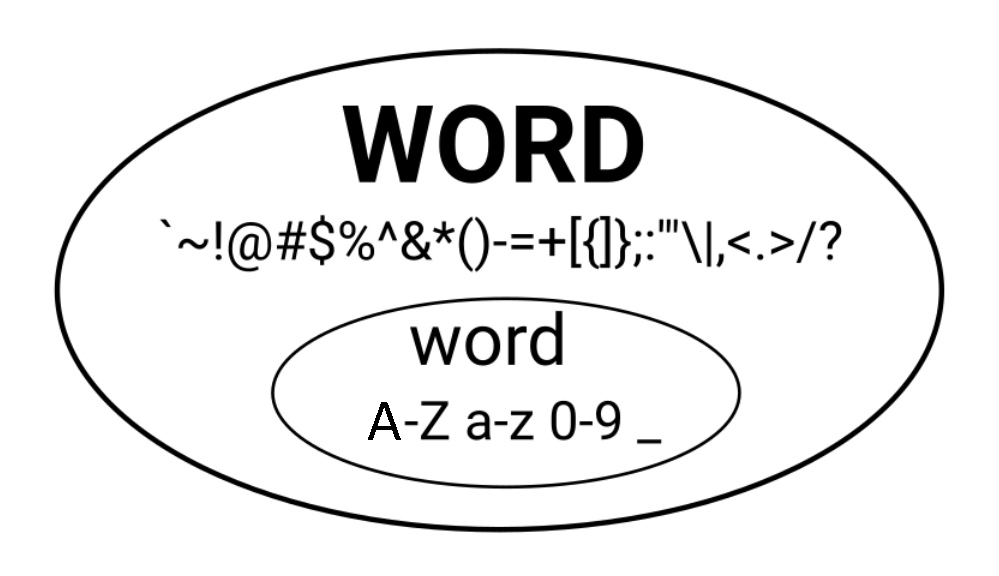 If your cursor is at m (of more above)

similarly, If your cursor is at p (of special)

That's a grammar problem while understanding the definition of "word".

I get stuck at first in Chinese version of this definition (could be miss-translation).

The definition is definitely correct, but it should be read like that:

if you want to bypass those and just jump to words lets say like a novel or short story has, use W.

For coding the small w is probably the one used most often. Depends where you are in the code.

15
Uppercase vs lowercase word motion commands
202
In Vim/Vi, how do you move the cursor to the end of the previous word?
4
how to select inside spaces in vim
5
Customize word boundaries of Option-Delete (and other word related shortcuts) in macOS?
0
How to search for WORD (not word) under the cursor?

1153
How to effectively work with multiple files in Vim
2132
How to replace a character by a newline in Vim
1751
How to duplicate a whole line in Vim?
1282
How do I move to end of line in Vim?
2067
Vim clear last search highlighting
1125
What is your most productive shortcut with Vim?
1316
What's a quick way to comment/uncomment lines in Vim?
1783
How to do case insensitive search in Vim
1525
How does the vim “write with sudo” trick work?
4293
How do I exit the Vim editor?