I'm trying to install Visual Studio 2012 Express for Windows Desktop and every time I run the installer I get this error:

"Windows Program Compatibility mode is on. Turn it off and then try setup again."

I checked the file properties and compatibility mode was off. Googling found that changing the name to "vs_premium.exe" or "vs_ultimate.exe" or changing the registry keys might help, but the name changes had no effect, and there were no registry keys to delete. I have restarted my machine several times to no avail.

Changing to Visual Studio 2013 is not an option for me, as my work computer has Visual Studio 2012 on it which they will not update to 2013, and I need to work on my project on both computers.

Previous posts are correct in that compatibility mode appears to be based entirely on file names. There is a simple method for determining precisely which name Windows expects:

Right-click the file, select Properties and navigate to the Details tab. There should be an entry labelled "Original filename". Simply rename the file accordingly and it should run happily. 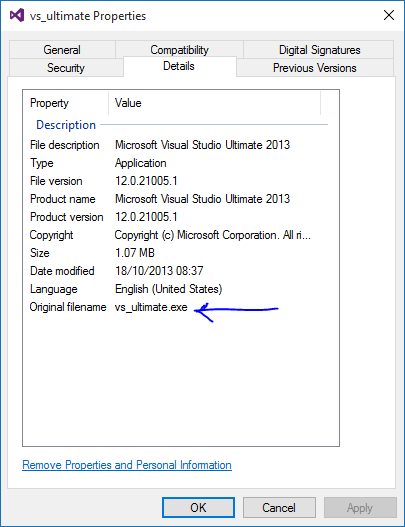 If you downloaded Visual Studio 2012 and Visual Studio 2013 at the same time and one was renamed with a "(0)" suffix (just as I did) then change the installer to the original name will probably fix it, because "somehow compatibility checking is based on file naming"

In case you mounted it, first extract the content before you install. it worked for me.

Had the same issue installing vs_ultimate on Windows 10, It tells me to turn compatibility mode off which I didn't know to do. After reading all the solutions above without success, I was able to solve it on my own.

I mounted the .iso before installing which was giving me problem, but later as I extracted it into a desktop folder, it installed fine.

I couldn't find a solution, but I could find a workaround. I downloaded the offline installer (ISO) and ran that instead. It's not a solution, but it should work in this situation.

Run as administrator. And for my 2013 installer I renamed it to be vs_professional.exe

In a round about way I discovered the problem on my system. Check the properties of the installer. Mine was blocked because it was downloaded from another system. Click unblock. Voila! If you can't find the location of the installer, run it again. When it fails, leave it running. Open task manager, right click the installer, then open file location. This will take you to the folder containing your installer.

mount the ISO file and run the setup as a from the disk.

I had the same issue, my solution was to run it in administrator mode and it seemed to work just fine.

Run as Administrator worked for me.

I had the same problem. I had run the installer from an ISO, reading from the DVD image.

The solution was to simply take the ISO and uncompress it as a .RAR into some folder, and everything worked.

This is the solution:

Not the answer you're looking for? Browse other questions tagged visual-studio-2012 installation windows-8.1 or ask your own question.