Creating a new thread yourself would be more appropriate if the job were going to be relatively long running (probably around a second or two, but it depends on the specific situation)

Other thread pool implementations exist that might be more appropriate for long-running operations.

Specifically, use a thread pool to prevent your app from creating too many threads. The most important feature of a threadpool is the work queue. That is, once your machine is sufficiently busy, the threadpool will queue up requests rather than immediately spawn more threads.

So, if you will create a small, bounded number of threads create them yourself. If you cannot determine up-front how many threads might be created (e.g. they're created in response to incoming IO), and their work will be short-lived, use the threadpool. If you don't know how many, but their work will be long-running, there's nothing in the platform to help you - but you might be able to find alternative threadpool implementations that fit.

spawns Foreground thread that will not die if you close your program. ThreadPool threads are background threads that die when you close the app.

I was curios about the relative resource usage for these and and ran a benchmark on my 2012 dual-core Intel i5 laptop using .net 4.0 release build on windows 8. Thread Pools took on average 0.035ms to start where Threads took an average of 5.06ms. In other words Thread in the pool started about 300x faster for large numbers of short lived threads. At least in the tested range (100-2000) threads, the total time per thread seemed pretty constant.

This is the code that was benchmarked: 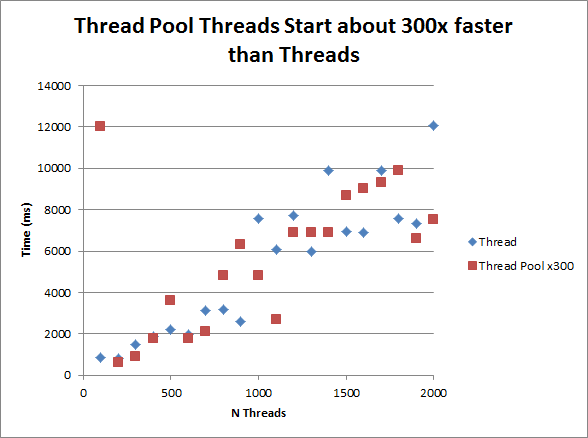 Check here for an earlier thread:

When should I not use the ThreadPool in .Net?

Summary is that Threadpool is good if you need to spawn many shortlived threads, whereas using Threads gives you a bit more control.

If you need a lot of threads, you probably want to use a ThreadPool. They re-use threads saving you the overhead of thread creation.

If you just need one thread to get something done, Thread is probably easiest.

Thread local storage is not a good idea with thread pools. It gives threads an "identity"; not all threads are equal anymore. Now thread pools are especially useful if you just need a bunch of identical threads, ready to do your work without creation overhead.

The primary need for theadpool threads is to handle short little tasks that are expected to complete almost instantly. Hardware interrupt handlers often run in a stacking context which would not be suitable for non-kernel code, but a hardware interrupt handler may discover that a user-mode I/O completion callback should be run as soon as possible. Creating a new thread for the purpose of running such a thing would be massive overkill. Having a few pre-created threads which can be dispatched to run I/O completion callbacks or other similar things is much more efficient.

A key aspect of such threads is that if I/O completion methods always complete essentially instantaneously and never block, and the number of such threads that are presently running such methods is at least equal to the number of processors, the only way any other thread could run before one of the aforementioned methods finishes would be if one of the other methods blocks or its execution time exceeds a normal threading time-slice; neither of those should happen very often if the thread pool is used as intended.

If a method cannot be expected to exit within 100ms or so of when it starts execution, the method should be executed via some means other than the main thread pool. If one has a lot of tasks to perform which are CPU intensive but won't block, it may be helpful to dispatch them using a pool of application threads (one per CPU core) which is separate from the "main" threadpool, since using more threads than cores will be counterproductive when running non-blocking CPU-intensive tasks. If, however, a method will take a second or longer to execute, and will spend most of its time blocked, the method should likely be run in a dedicated thread, and should almost certainly not be run in a main-threadpool thread. If a long-running operation needs to be triggered by something like an I/O callback, one should either start a thread for the long-running operation in advance of the callback and have it wait on a monitor which the callback pulses, or else have the callback launch a new thread to perform the operation while the callback exits, effectively returning its own thread to the threadpool.

In general (I have never used .NET), a thread pool would be used for resource management purposes. It allows constraints to be configured into your software. It also may be done for performance reasons, as creation of new threads may be costly.

There may also be system specific reasons. In Java (again I don't know if this applies to .NET), the manager of the threads may apply thread specific variables as each thread is pulled from the pool, and unset them when they are returned (common way to pass something like an identity).

Example constraint: I only have 10 db connections, so I would only allow 10 worker threads for accessing the database.

This doesn't mean that you should not create your own threads, but there are conditions under which it makes sense to use a pool.

Using a pool is a good idea, if you don't know or can't control how many thread will be created.

Just have an issue with a form using thread to update some field from a database on a positionchanged event of a list control (avoid freeze). It took 5 minutes for my user to have an error from the database (too many connection with Access) because he was changing the list position too fast...

I know there are other ways to resolve the base problem (including not using access) but pooling is a good start.

Not the answer you're looking for? Browse other questions tagged .net multithreading architecture threadpool or ask your own question.

1
C# Thread Programming
39
When should I not use the ThreadPool in .Net?
26
Multithreaded service, BackgroundWorker vs ThreadPool?
17
c# thread method
14
How to guarantee a new thread is created when using the Task.StartNew method
17
Is it true that for long running processes it is better to do thread manually instead of threadpool?
12
Thread: How to re-start thread once completed?
9
Parallel.For vs regular threads
9
C# Communication between threads
4
Best multi-thread approach for multiple web requests
See more linked questions

626
Cross-thread operation not valid: Control accessed from a thread other than the thread it was created on
867
ASP.NET Web Site or ASP.NET Web Application?
1767
Proper use of the IDisposable interface
2239
"implements Runnable" vs "extends Thread" in Java
1500
How do I update the GUI from another thread?
610
What's the difference between REST & RESTful
2053
C++11 introduced a standardized memory model. What does it mean? And how is it going to affect C++ programming?
1548
Why not inherit from List<T>?
938
What is the difference between .NET Core and .NET Standard Class Library project types?