I have a scenario where I have several thousand instances of data. The data itself is represented as a single integer value. I want to be able to detect when an instance is an extreme outlier.

For example, with the following example data:

d is clearly an anomaly, and I would want to perform a specific action based on this.

I was tempted to just try an use my knowledge of the particular domain to detect anomalies. For instance, figure out a distance from the mean value that is useful, and check for that, based on heuristics. However, I think it's probably better if I investigate more general, robust anomaly detection techniques, which have some theory behind them.

Since my working knowledge of mathematics is limited, I'm hoping to find a technique which is simple, such as using standard deviation. Hopefully the single-dimensioned nature of the data will make this quite a common problem, but if more information for the scenario is required please leave a comment and I will give more info.

Edit: thought I'd add more information about the data and what I've tried in case it makes one answer more correct than another.

The values are all positive and non-zero. I expect that the values will form a normal distribution. This expectation is based on an intuition of the domain rather than through analysis, if this is not a bad thing to assume, please let me know. In terms of clustering, unless there's also standard algorithms to choose a k-value, I would find it hard to provide this value to a k-Means algorithm.

The action I want to take for an outlier/anomaly is to present it to the user, and recommend that the data point is basically removed from the data set (I won't get in to how they would do that, but it makes sense for my domain), thus it will not be used as input to another function.

So far I have tried three-sigma, and the IQR outlier test on my limited data set. IQR flags values which are not extreme enough, three-sigma points out instances which better fit with my intuition of the domain.

Information on algorithms, techniques or links to resources to learn about this specific scenario are valid and welcome answers.

What is a recommended anomaly detection technique for simple, one-dimensional data?

Check out the three-sigma rule:

An alternative method is the IQR outlier test:

this test is usually employed by Box plots (indicated by the whiskers): 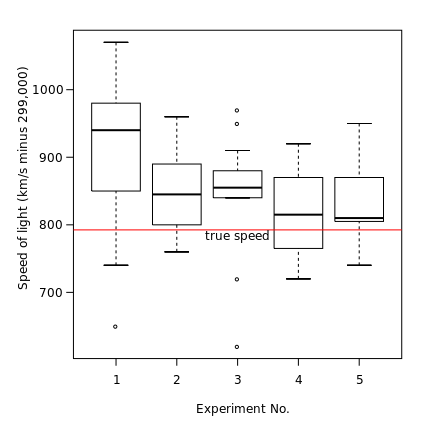 For your case (simple 1D univariate data), I think my first answer is well suited. That however isn't applicable to multivariate data.

@smaclell suggested using K-means to find the outliers. Beside the fact that it is mainly a clustering algorithm (not really an outlier detection technique), the problem with k-means is that it requires knowing in advance a good value for the number of clusters K.

A better suited technique is the DBSCAN: a density-based clustering algorithm. Basically it grows regions with sufficiently high density into clusters which will be maximal set of density-connected points.

DBSCAN requires two parameters: epsilon and minPoints. It starts with an arbitrary point that has not been visited. It then finds all the neighbor points within distance epsilon of the starting point.

If the number of neighbors is greater than or equal to minPoints, a cluster is formed. The starting point and its neighbors are added to this cluster and the starting point is marked as visited. The algorithm then repeats the evaluation process for all the neighbors recursively.

If the number of neighbors is less than minPoints, the point is marked as noise.

If a cluster is fully expanded (all points within reach are visited) then the algorithm proceeds to iterate through the remaining unvisited points until they are depleted.

Finally the set of all points marked as noise are considered outliers.

There are a variety of clustering techniques you could use to try to identify central tendencies within your data. One such algorithm we used heavily in my pattern recognition course was K-Means. This would allow you to identify whether there are more than one related sets of data, such as a bimodal distribution. This does require you having some knowledge of how many clusters to expect but is fairly efficient and easy to implement.

After you have the means you could then try to find out if any point is far from any of the means. You can define 'far' however you want but I would recommend the suggestions by @Amro as a good starting point.

For a more in-depth discussion of clustering algorithms refer to the wikipedia entry on clustering.

Both three-sigma rule and IQR test are often used, and there are a couple of simple algorithms to detect anomalies.

The IQR test should be:

Not the answer you're looking for? Browse other questions tagged machine-learning classification or ask your own question.

9
Kmeans matlab “Empty cluster created at iteration 1” error
8
Iregular plot of k-means clustering, outlier removal
2
Find connected components in a graph in MATLAB
-1
How to make a fusion of three similar looking graphs into one graph

2
Can similarity detection techniques be applied to a text document formatted as a big ASCII encoded integer byte array?
1
How to use the K-Means Algorithm to find anomalies/outliers