Are there multiple ways to group radio buttons in Windows Forms?

I have a few radio buttons in my form that should all be connected, but I want one of them in a separate container to group it specifically with some other related inputs. Here is the general look: 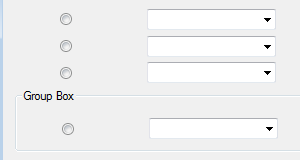 Is there a way to group the fourth radio button with the other 3 even though it is in its own group box?

Fact that radio buttons are mutually exclusive only when they are within same parent. Being said that I can think of two options.

RadioButtons are no magic, they just set the Checked property of other radio's to false behind the scenes.

They're in different containers, so you're not able to. I think this is a dupe of this question: Radiobuttons as a group in different panels

This question talks about it:

You can handle the CheckedChanged event of your radio buttons to accomplish what you need:

You can put all the radio buttons in the same parent container (group box would go into the parent as well), but configure the location and the z-order of the radio button in question so it's located over the group box and draws on top of it. That will give you the behaviour you want.

Make sure to right click on it and "bring to front" and/or send the group box to the back, so they draw in the correct order.

Not the answer you're looking for? Browse other questions tagged c# winforms radio-button or ask your own question.

6
Radiobuttons as a group in different panels
1
VB.NET Group Radio Buttons across different Panels
0
Manipulating collection from the inside