Whether it is HTTP, HTTPS or some thing else?

The protocols of the communication between the 3rd party server and GCM server (HTTP or XMPP) were already mentioned in the other answers.

The protocol of the communication between the device and GCM server is not discussed in the GCM documentation, since you never have to access it directly as an Android application developer, and therefore you don't need to know about it.

However, here's a quote from a Google developer from the team that created GCM, which says a few things about the connection. From what he says, you can only know that it's a long-lived TCP connection.

However a number of routers and mobile operators don't do this, and then GCM needs to rely on the heartbeat, ~15 min on Wifi, more on mobile.

(The quote is taken from an answer by that person)

There are two protocols http and xmpp which you can use to send message to GCM server.

Now its up to you what you want to use. If you want to broadcast message then u should go with http.

you can broadcast 1000 message in a single http request. And only one message through xmpp in a request...

But gcm won't support up streaming using http. for that you should use xmpp.Xmpp can be used for both up streamlining and down streaming.

The way of delivering messages is based on the protocol that you've chosen, either HTTP or XMPP (i.e., it's the same). The magic and basic way of working is leaving a socket opened between the GCM server and the user's device.

This way, when an user should receive a message, this opened socket will be used and send the message through itself. This also helps the GCM server knowing which devices are connected or not. So this way, if your third party server says a message should be sent to a user and the GCM server knows the user is not connected, it won't send it at that time, but will try once the connection is again established, so it won't waste connection attempts in vain. The default timeout is 4 weeks, however, it can be changed.

As per the official GCM documentation:

If the device is not connected to GCM, the message will be stored until a connection is established (again respecting the collapse key rules). When a connection is established, GCM will deliver all pending messages to the device, regardless of the delay_while_idle flag. If the device never gets connected again (for instance, if it was factory reset), the message will eventually time out and be discarded from GCM storage. The default timeout is 4 weeks, unless the time_to_live flag is set.

You can find more info here.

It uses both HTTP and XMPP

iOS however, requires a dedicated TCP connection on a proprietary port, and GAE environment doesn't allow any external protocol except HTTP over port 80. 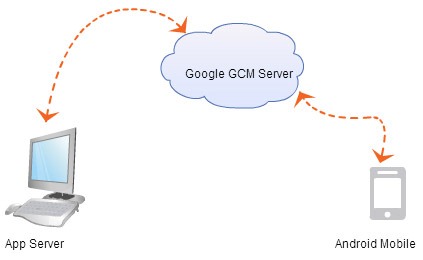 This is how these components interact:

Check out this for more details -->

Not the answer you're looking for? Browse other questions tagged android push-notification protocols google-cloud-messaging android-notifications or ask your own question.