I have a project which contains two F# projects and a C# project in which I'd like to write some XUnit tests:

I am unable to add a reference from Tests to either of the F# libraries. 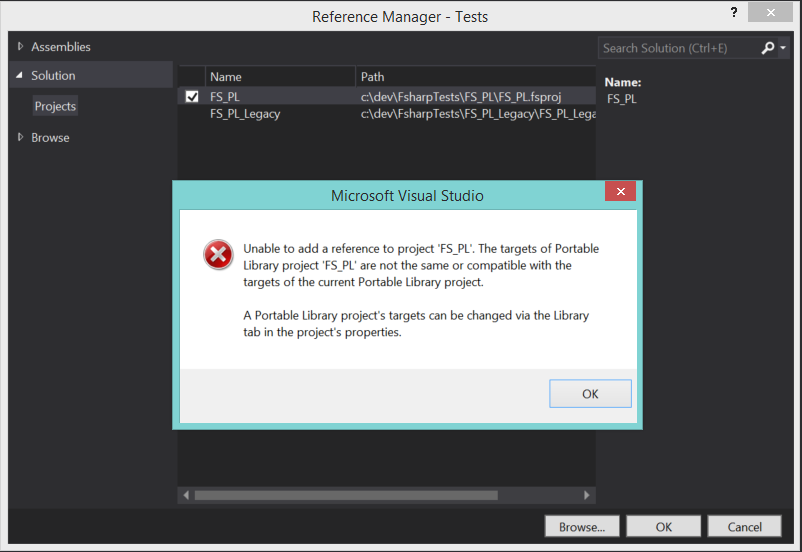 This is odd since both my Tests and FS_PL libraries are configured to target .NET 4.5 & Windows 8.

Does anyone know what I am doing wrong?

Using miegirl's workaround from a Connect issue discussing this problem, I added the following to the C# project:

This at least allows VS to reference the F# projects, but those projects are tagged with several warnings and the C# portable library is unable to build as it cannot reference the types in one or both of the F# libraries :(

Most of the warnings in the build output window indicate that the F# libraries cannot be referenced as they appear to have "an indirect dependency on the framework assembly "[System.Threading/System.Lync/etc.]" which could not be resolved in the currently targeted framework"

I raised this issue on Twitter with Don Syme and some of the F# team. They confirmed that it was an issue they had a fix that was working its way through the release process.

I installed today's Visual F# daily build and I can confirm that this issue has been resolved!

Thanks to Don and the F# team for fixing this issue - I can now incorporate new F# code into my predominantly C# codebase & test suite ... and begin replacing chunks of our system with FAR less F# code than the equivalent C# ;)

This bug is old, but still occurs. I ran into this issue when running VS 2015 Community. I realize that this question is about VS 2013, but I was not sure else where to post my answer.

I had a Xamarin Forms Xaml app and I wanted to add an F# PCL to do some calculations. I saw the warning message when trying to reference the F# PCL in my C# PCL:

I tried editing the csproj file directly and even tried upgrading to VS 2017 RC but nothing was working.

The fix is a bit of a hack.

I don't know the root cause, but you can manually edit the .csproj file to add a reference to the F# project. It will show a warning in the solution explorer indicating that something's still wrong, but it seems to work in practice.

Not the answer you're looking for? Browse other questions tagged c# f# visual-studio-2013 portable-class-library or ask your own question.