How do I install Python OpenCV through Conda?

I'm trying to install OpenCV for Python through Anaconda, but I can't seem to figure this out.

No cigar. I ran across this which lists opencv as an included package:

After running conda info I noticed my version is 3.4.1, but I couldn't seem to find any information about this version online. I'm pretty confused about this.

Am I missing something pretty obvious here? If opencv was available for a previous version of Anaconda, then why wouldn't it be available for the newer version? And why does that link only show me documentation for version 1.9.2?

You can install it using binstar:

conda install opencv currently works for me on UNIX/python2. This is worth trying first before consulting other solutions.

The command above was what was shown to me when I ran the following:

This was the output:

I tested the following in python without errors:

I have summarized my now fully working solution, OpenCV-Python - How to install OpenCV-Python package to Anaconda (Windows). Nevertheless I've copied and pasted the important bits to this post.

(Read on for the detail instructions...)

Anaconda is essentially a nicely packaged Python IDE that is shipped with tons of useful packages, such as NumPy, Pandas, IPython Notebook, etc. It seems to be recommended everywhere in the scientific community. Check out Anaconda to get it installed.

Cautious Note: I originally tried out installing the binstar.org OpenCV package, as suggested. That method however does not include the FFMPEG codec - i.e. you may be able to use OpenCV, but you won't be able to process videos.

The following instruction works for me is inspired by this OpenCV YouTube video. So far I have got it working on both my desktop and laptop, both 64-bit machines and Windows 8.1.

Firstly, go to the official OpenCV site to download the complete OpenCV package. Pick a version you like (2.x or 3.x). I am on Python 2.x and OpenCV 3.x - mainly because this is how the OpenCV-Python Tutorials are setup/based on.

In my case, I've extracted the package (essentially a folder) straight to my C drive (C:\opencv).

Copy and Paste the cv2.pyd file

The Anaconda Site-packages directory (e.g. C:\Users\Johnny\Anaconda\Lib\site-packages in my case) contains the Python packages that you may import. Our goal is to copy and paste the cv2.pyd file to this directory (so that we can use the import cv2 in our Python codes.).

From this OpenCV directory (the beginning part might be slightly different on your machine). For Python 3.x, I guess, just change the 2.x to 3.x accordingly.

To this Anaconda directory (the beginning part might be slightly different on your machine):

After performing this step we shall now be able to use import cv2 in Python code. BUT, we still need to do a little bit more work to get FFMPEG (video codec) to work (to enable us to do things like processing videos).

For example, my PATH user variable looks like this...

This is it we are done! FFMPEG is ready to be used!

We need to test whether we can now do these in Anaconda (via Spyder IDE):

Test 1: Can we import OpenCV?

To confirm that Anaconda is now able to import the OpenCV-Python package (namely, cv2), issue these in the IPython console:

If the package cv2 is imported OK with no errors, and the cv2 version is printed out, then we are all good! Here is a snapshot: 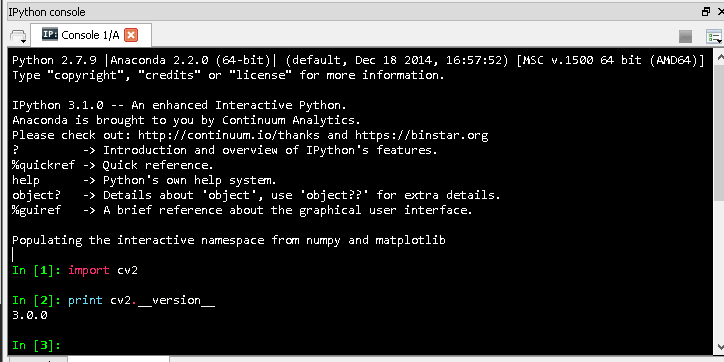 Test 2: Can we Use the FFMPEG codec?

Place a sample input_video.mp4 video file in a directory. We want to test whether we can:

To do this we need to have a test Python code, call it test.py. Place it in the same directory as the sample input_video.mp4 file.

This is what test.py may look like (I've listed out both newer and older version codes here - do let us know which one works / not work for you!).

This test is VERY IMPORTANT. If you'd like to process video files, you'd need to ensure that Anaconda / Spyder IDE can use the FFMPEG (video codec). It took me days to have got it working. But I hope it would take you much less time! :)

You can install OpenCV by running these commands in the Anaconda command prompt:

It doesn't seem like the page you linked includes opencv any more. (Funny, I do recall it being included at a previous point as well.)

In any case, installation of OpenCV into Anaconda, although unavailable through conda, is pretty trivial. You just need to download one file.

Now at the Python prompt you should be able to type "import cv2"...to verify that it works, type "print cv2.__version__", and it should print out the OpenCV version you downloaded.

This updates libfreetype.6.dylib to 24.0.0 compatibility and installs OpenCV 4.1.0.

The following installs opencv from conda-forge (note: tried on Windows)

You can also check the installed version using:

To install OpenCv with conda on Windows-64 and Python 3.5, the only one that worked for me is:

I had exactly the same problem, and could not get conda to install OpenCV. However, I managed to install it with the OpenCV installer you find at this site:

His files are "Wheel" whl files that can be installed with pip, e.g.

in a command window. It worked with Spyder directly after executing this command for me. I have had the same experience with other packages, the above UC Irvine site is a gold mine.

it works on anaconda3 windows 10 I have already downloaded it at 5 December 2019.

after that windows will ask for permission and try again:

look at this it works!! 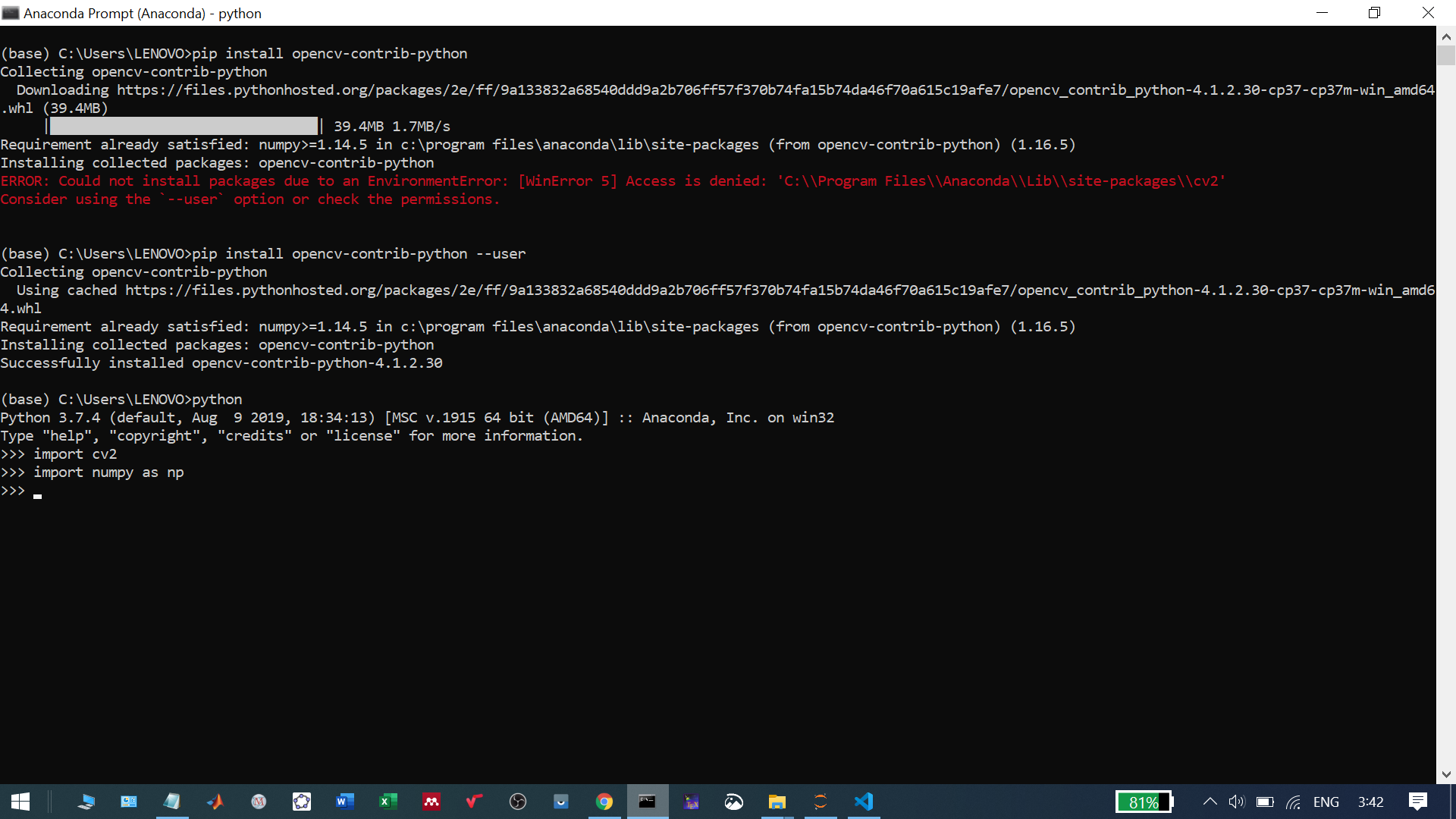 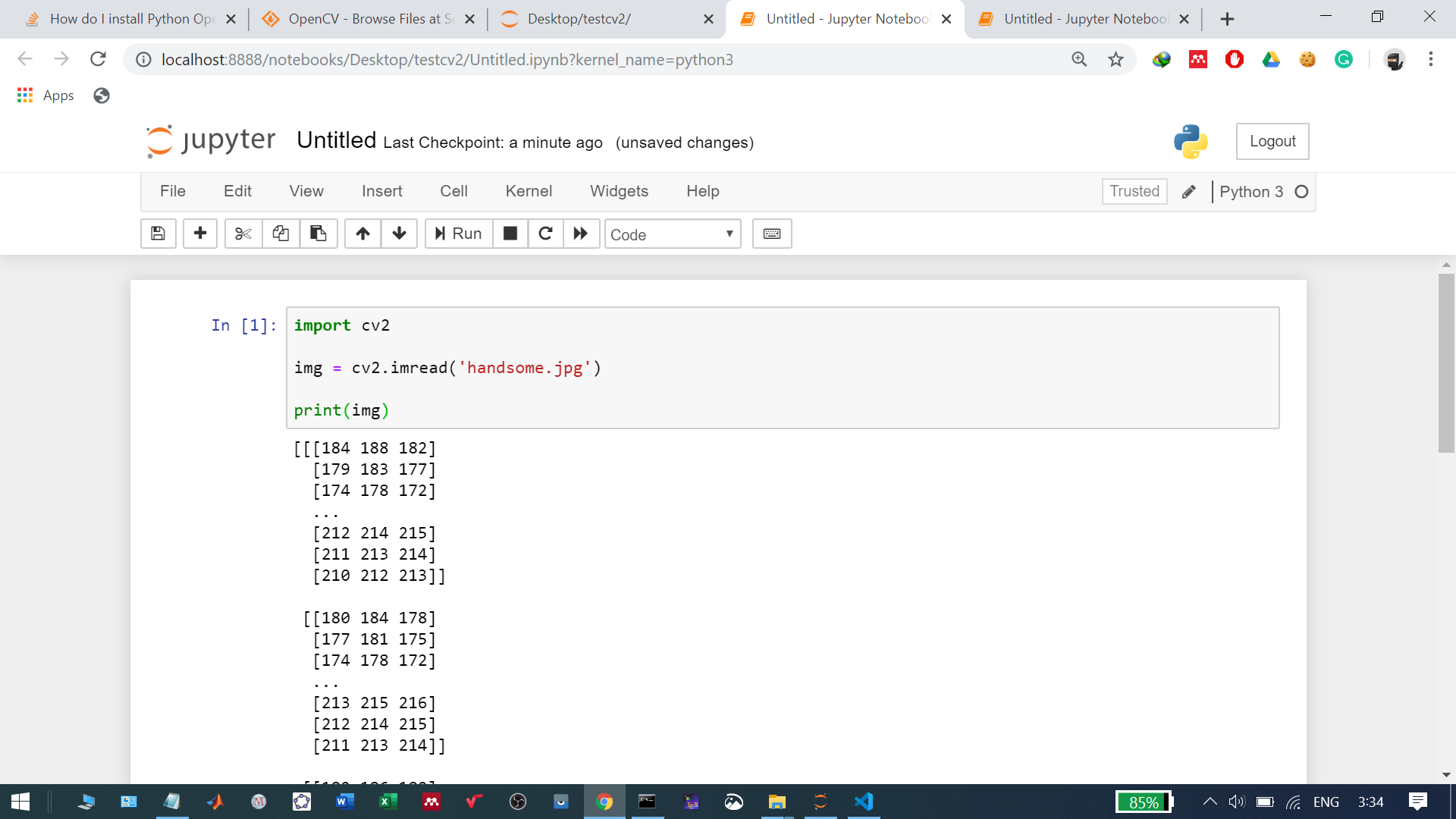 I entered the following command in the command prompt:

This worked for me!!!

On Linux, as discussed here, the best way to get opencv at present is from loopbio at conda-forge:

If you have 'a modern CPU' there exists also a compiled version "enabling all modern CPU instruction set extensions [...] and against libjpeg-turbo":

Two of the solutions mentioned in other answers don't work unconditionally:

EDIT: @Yamaneko points out that as of 14 June 2017, "there is an issue with loopbio's OpenCV version 3.2.0. It silently fails to read and write videos. It is due to a combination of an upstream OpenCV issue in combination with an old GCC. More details here. There is a PR on its way to solve the issue."

I just installed conda 4.7.11 in Windows 10. OpenCV can be easily installed in Anaconda Navigator. After launching Navigator, click on Environments on the left panel. In the top drop-down, select Not installed. Then search for py-opencv, tick on the left checkbox to install it. It will install the dependent package libopencv. I use import cv2 in Spyder to access it. 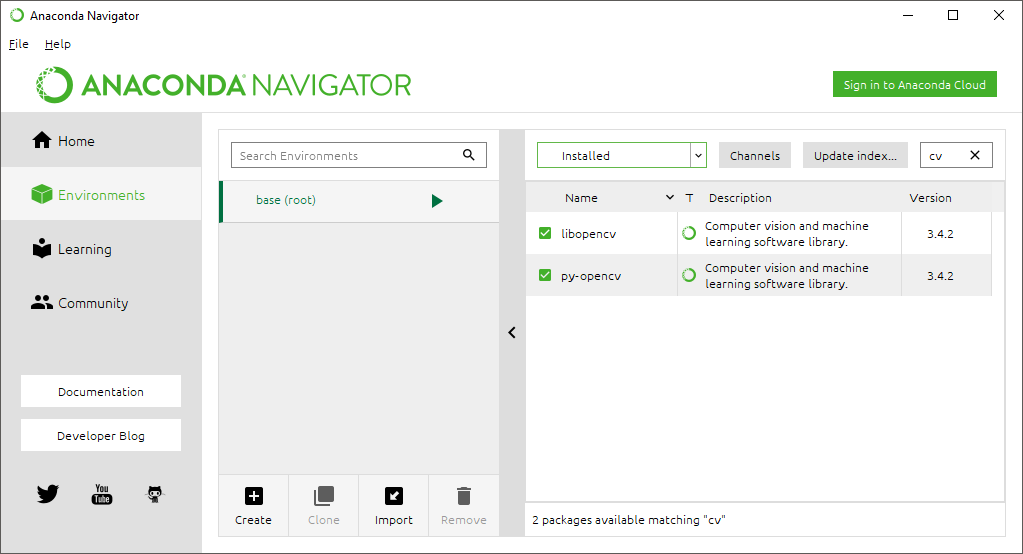 But I found a compatible package here:

It can be installed via the command line like so:

Worked like a charm. First time I've ever gotten OpenCV to work on 3.x!

Download .whl file (cpMN where you have Python M.N). contrib includes OpenCV-extra packages. For example, assuming you have Python 3.6 and Windows 64-bit, you might download opencv_python‑3.2.0+contrib‑cp36‑cp36m‑win_amd64.whl

You'll have a package in your conda list : opencv-python 3.2.0+contrib <pip>

Now you could test it (no errors):

Original source page where I took the information is here.

If conda install opencv or conda install -c https://conda.binstar.org/menpo opencv does not work, you can try to compile from the source.

Download the source from http://opencv.org/downloads.html, follow the install instruction in http://docs.opencv.org/2.4/doc/tutorials/introduction/linux_install/linux_install.html, (maybe you can jump to the last part directly, 'Building OpenCV from Source Using CMake...), change the cmake command as following:

To install the OpenCV package with conda, run:

An easy and straight forward solution is to install python3.5 first before installing opencv3

Although not through Conda, and this is specific to Ubuntu, the easiest way to install OpenCV with all its contrib modules built in such as SIFT and SURF is to use:

If you choose not to have the contribs built in, you could instead do:

You need to install the following dependencies below before you run those commands though:

The correct command for installing the current version of OpenCV 3.3 in Anaconda windows:

One thing i think nobody mentioned is that if you are using Windows N or KN edition, please install Media Feature Pack that is used for OpenCV. Also make sure you have Visual C++ Distributable installed. And then you can use command

The following command works for me too. I am using an embedded IPython Notebook in Anaconda.

I have just tried on two Win32 Python 3.5 computers. At first, I was able to conda install opencv, but it didn't work nor did the version from menpp, but this did:

I had steps in repo that will help you properly install OpenCV.

If the links if broken, see this.

YOU NEED TO HAVE WINDOWS OS to begin this project.

If you want to install opencv 3.4.0, there, unfortunately, is not this version inside conda. You need to use pip instead.

I tried following command and it works fine

Not the answer you're looking for? Browse other questions tagged python opencv anaconda conda or ask your own question.

1
Installing OpenCV with miniconda while Python 2.7 exists
387
Cannot find module cv2 when using OpenCV
477
What do the python file extensions, .pyc .pyd .pyo stand for?
16
Install opencv with conda
14
python cv2.Videocapture() does not work, cap.isOpened() returns false
9
VideoCapture Does Not Work in Anaconda
9
Is cv2.cv missing in OpenCV 3.0?
5
Failed to run conda install -c menpo opencv3=3.2.0 in Windows7
2
How do I install openCV via anaconda at mac ?
3
PyCharm: Installation of non-free OpenCV modules for operations like SIFT, SURF
See more linked questions

6405
How do I merge two dictionaries in a single expression?
6711
How do I check whether a file exists without exceptions?
5756
How do I execute a program or call a system command?
6904
What are metaclasses in Python?
7425
Does Python have a ternary conditional operator?
3246
How do I concatenate two lists in Python?
3588
Does Python have a string 'contains' substring method?
2699
How do I install pip on Windows?
2834
How do I access environment variables in Python?
3018
How do I delete a file or folder in Python?