How do I set a number of retry attempts in RabbitMQ?

I am using RabbitMQ and I have a queue that holds email messages. My consumer service de-queues messages and attempts to send them. If, for any reason, my consumer cannot send the message, I would like to re-queue the message to send again. I realize I can do a basicNack and set the requeue flag to be true, however, I don't want to requeue the message indefinitely (say, if our email system goes down, I don't want to continuously requeue unsent messages). I would like to define a finite number of times that I can requeue the message to be sent again. I can't set a field on the email message object, however, when I dequeue it and send a nack. The updated field is not present on the message in the queue. Is there any other way in which I can approach this? Thanks in advance.

There are no such feature like retry attempts in RabbitMQ (as well as in AMQP protocol).

The pro of #3 is that redelivered message stay in queue head. This is important if you have long queue or if message order is important for you (note, that redeliveries will break strict messages order, see official docs for details or this question on SO).

There is similar answer in this topic, but in php. Look through it, maybe it helps you a bit (start reading it from words "There are multiple techniques to deal with cycle redeliver problem".

Although this is an old question I think you can now easily do this with the combination of dead letter exchanges and the x-death header array added once a message is dead lettered:

The dead-lettering process adds an array to the header of each dead-lettered message named x-death. This array contains an entry for each dead lettering event, identified by a pair of {queue, reason}. Each such entry is a table that consists of several fields:

queue: the name of the queue the message was in before it was dead-lettered

time: the date and time the message was dead lettered as a 64-bit AMQP 0-9-1 timestamp

routing-keys: the routing keys (including CC keys but excluding BCC ones) the message was published with

count: how many times this message was dead-lettered in this queue for this reason 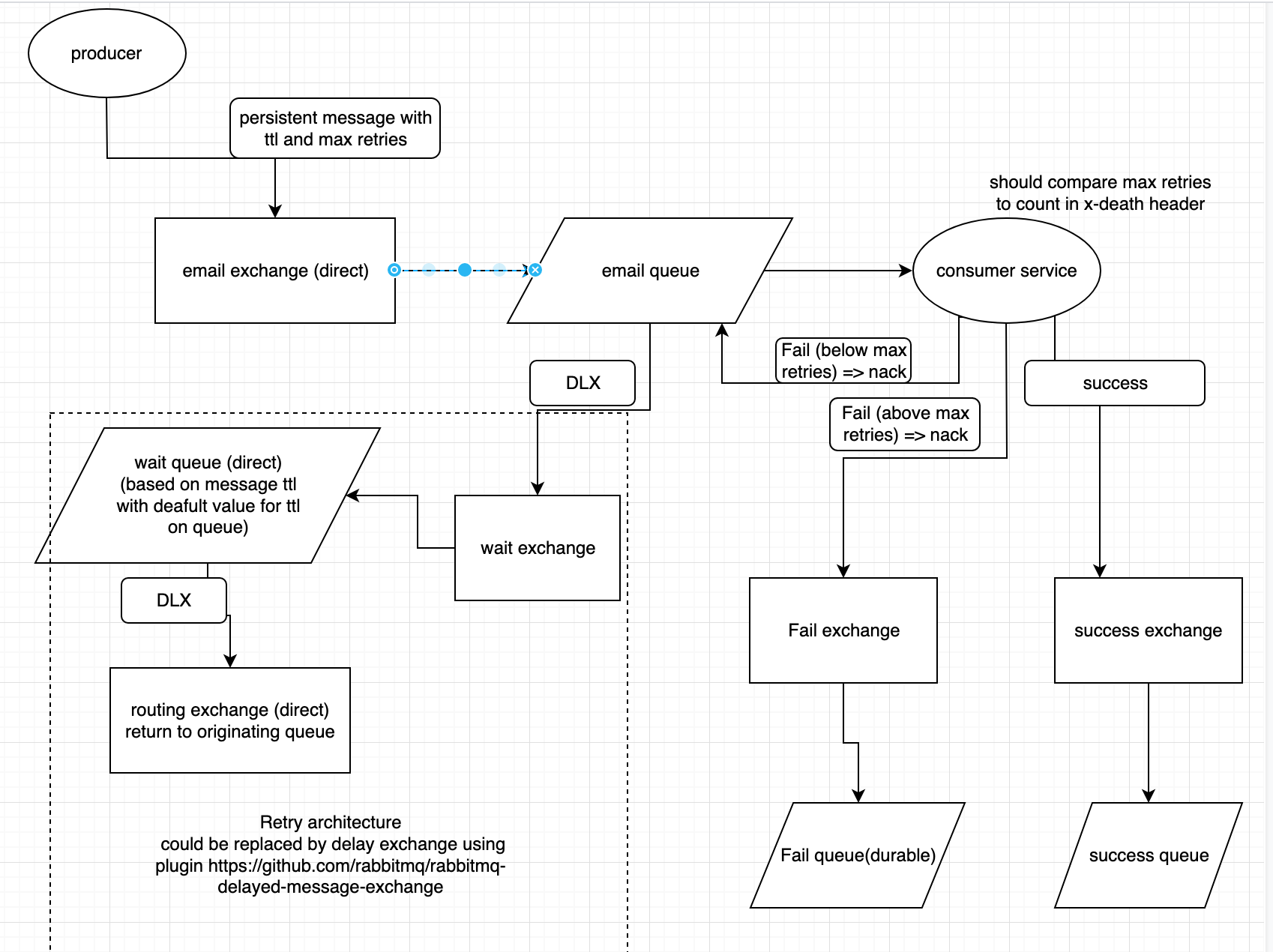 From my perspective the better idea here is to implement a combination of dead-letter exchange and retry logic inside of the consumer. If the consumer fails to handle the message then you put a message into a DeadLetterQueue

You should use Quorum queue type. That queue type has a Delivery limit argument to specify the number of retries to deliver a message before deleting it.

Specify next arguments when create your queue:

Not the answer you're looking for? Browse other questions tagged .net queue rabbitmq consumer or ask your own question.

81
RabbitMQ - Message order of delivery
20
RabbitMQ: How to requeue message with counter
17
Consuming not acknowledge messages from RabbitMq
13
Changing the headers and body of a RabbitMQ message when retrying it?
1
RabbitMQ error when setting up Learning Transport with NServiceBus
0
How to make RabbitMQ redeliver a message when it doesn't receive a ACK after a certain time?
0
RabbitMQ retrying mechanism
0
RabbitMQ subscriber sending message back onto RabbitMQ queue?
0
Can I configure max tries for Spring Cloud Stream with RabbitMQ using DLQ
1
RabbitMQ - Retry max times before finally placing in Dead Letter Queue
See more linked questions

4186
How to enumerate an enum
59
RabbitMQ use of immediate and mandatory bits
196
RabbitMQ / AMQP: single queue, multiple consumers for same message?
209
RabbitMQ and relationship between channel and connection
81
RabbitMQ - Message order of delivery
58
RabbitMQ dead letter exchange never getting messages
2
Nack and reject on RabbitMQ
0
RabbitMQ - only one queue, with multiple consumers receiving different messages
0
How do I set/limit a number of retry attempts in RabbitMQ when sending a message if it fails?