What does the “yield” keyword do?

Ask Question
Asked 12 years, 5 months ago
Active 1 month ago
Viewed 2.5m times
11066
Want to improve this post? Provide detailed answers to this question, including citations and an explanation of why your answer is correct. Answers without enough detail may be edited or deleted.

What is the use of the yield keyword in Python, and what does it do?

For example, I'm trying to understand this code1:

And this is the caller:

What happens when the method _get_child_candidates is called? Is a list returned? A single element? Is it called again? When will subsequent calls stop?

1. This piece of code was written by Jochen Schulz (jrschulz), who made a great Python library for metric spaces. This is the link to the complete source: Module mspace.

Iterator generator: next() will compute the next element on the fly (execute code)

You can see the yield/generator as a way to manually run the control flow from outside (like continue loop one step), by calling next, however complex the flow.

Note: The generator is NOT a normal function. It remembers the previous state like local variables (stack). See other answers or articles for detailed explanation. The generator can only be iterated on once. You could do without yield, but it would not be as nice, so it can be considered 'very nice' language sugar.

yield is similar to return. The difference is:

yield makes a function iterable (in the following example primes(n = 1) function becomes iterable).
What it essentially means is the next time the function is called, it will continue from where it left (which is after the line of yield expression).

In the above example if isprime(n) is true it will return the prime number. In the next iteration it will continue from the next line

An analogy could help to grasp the idea here: 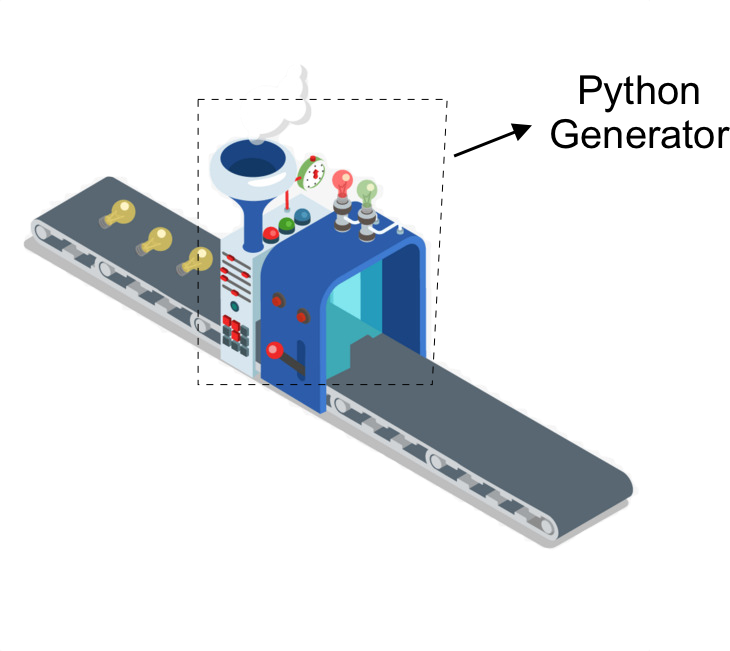 Imagine that you have created an amazing machine that is capable of generating thousands and thousands of lightbulbs per day. The machine generates these lightbulbs in boxes with a unique serial number. You don't have enough space to store all these lightbulbs at the same time (i.e., you cannot keep up with the speed of the machine due to storage limitation), so you would like to adjust this machine to generate lightbulbs on demand.

Python generators don't differ much from this concept.

Imagine that you have a function x that generates unique serial numbers for the boxes. Obviously, you can have a very large number of such barcodes generated by the function. A wiser, and space efficient, option is to generate those serial numbers on-demand.

In Python generators (a special type of iterators) are used to generate series of values and yield keyword is just like the return keyword of generator functions.

The other fascinating thing yield keyword does is saving the state of a generator function.

So, we can set a number to a different value each time the generator yields.

yield yields something. It's like somebody asks you to make 5 cupcakes. If you are done with at least one cupcake, you can give it to them to eat while you make other cakes.

Here factory is called a generator, which makes you cakes. If you call make_function, you get a generator instead of running that function. It is because when yield keyword is present in a function, it becomes a generator.

They consumed all the cakes, but they ask for one again.

and they are being told to stop asking more. So once you consumed a generator you are done with it. You need to call make_cake again if you want more cakes. It is like placing another order for cupcakes.

You can also use for loop with a generator like the one above.

One more example: Lets say you want a random password whenever you ask for it.

Here rpg is a generator, which can generate an infinite number of random passwords. So we can also say that generators are useful when we don't know the length of the sequence, unlike list which has a finite number of elements.

All of the answers here are great; but only one of them (the most voted one) relates to how your code works. Others are relating to generators in general, and how they work.

So I won't repeat what generators are or what yields do; I think these are covered by great existing answers. However, after spending few hours trying to understand a similar code to yours, I'll break it down how it works.

Your code traverse a binary tree structure. Let's take this tree for example:

And another simpler implementation of a binary-search tree traversal:

The execution code is on the Tree object, which implements __iter__ as this:

The while candidates statement can be replaced with for element in tree; Python translate this to

Because Node.__iter__ function is a generator, the code inside it is executed per iteration. So the execution would look like this:

The catch here is that every iteration creates sub-iterators to traverse the tree, and holds the state of the current iterator. Once it reaches the end it traverse back the stack, and values are returned in the correct order (smallest yields value first).

Your code example did something similar in a different technique: it populated a one-element list for every child, then on the next iteration it pops it and run the function code on the current object (hence the self).

I hope this contributed a little to this legendary topic. I spent several good hours drawing this process to understand it.

Can also send data back to the generator!

You can use the yield keyword to send data back to a "live" generator.

Let's say we have a method which translates from english to some other language. And in the beginning of it, it does something which is heavy and should be done once. We want this method run forever (don't really know why.. :)), and receive words words to be translated.

use send method inside a generator to send data back to the generator. To allow that, a (yield) is used.

yield in python is in a way similar to the return statement, except for some differences. If multiple values have to be returned from a function, return statement will return all the values as a list and it has to be stored in the memory in the caller block. But what if we don't want to use extra memory? Instead, we want to get the value from the function when we need it. This is where yield comes in. Consider the following function :-

And the caller is :-

The above code segment (caller function) when called, outputs :-

As can be seen from above, yield returns a value to its caller, but when the function is called again, it doesn't start from the first statement, but from the statement right after the yield. In the above example, "First value printing" was printed and the function was called. 1 was returned and printed. Then "Second value printing" was printed and again fun() was called. Instead of printing 1 (the first statement), it returned 2, i.e., the statement just after yield 1. The same process is repeated further.

Not the answer you're looking for? Browse other questions tagged python iterator generator yield coroutine or ask your own question.

79
for x in y(): how does this work?
17
What is a “yield” statement in a function?
23
Trouble understanding python generators
6
What does yield do in python 2.7?
10
How does a function in Python remember its values after it returns?
2
How Generator expressions work internally in python?
3
Yield does not work, but return does
4
What is the difference between yield and return?
-1
About generator in Python
0
What does “for i in generator():” do?
See more linked questions