Normalization: What does "repeating groups" mean?

I have read different tutorials and seen different examples of normalization, specially the notion of "repeating groups" in the first normal form. From them I have have gathered that repeating groups are "kind-of" multi-valued attributes (e.g. here and here).

But we already make separate tables for each multi-valued attribute by including foreign keys from the parent table during the process of mapping an ERM (Entity relationship Model) to a RDM (Relational Data Model)? Reference: this 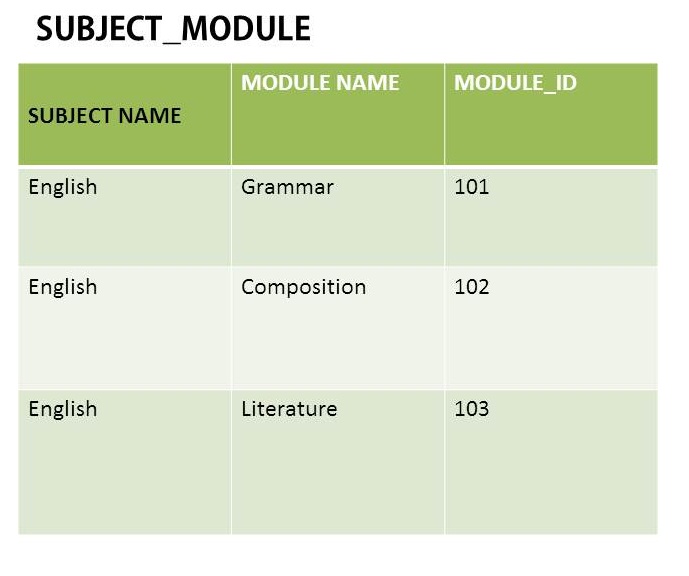 In this example, the value English is repeating again and again. Is this a repeating group? If I eliminate it to make another table SUBJECT with Subject Name and Module_ID(Foreign key), this is what I get. Sure it gets rid of the repeating value, but I am not sure if this is the right thing. Is it right?

The term "repeating group" originally meant the concept in CODASYL and COBOL based languages where a single field could contain an array of repeating values. When E.F.Codd described his First Normal Form that was what he meant by a repeating group. The concept does not exist in any modern relational or SQL-based DBMS.

The term "repeating group" has also come to be used informally and imprecisely by database designers to mean a repeating set of columns, meaning a collection of columns containing similar kinds of values in a table. This is different to its original meaning in relation to 1NF. For instance in the case of a table called Families with columns named Parent1, Parent2, Child1, Child2, Child3, ... etc the collection of Child N columns is sometimes referred to as a repeating group and assumed to be in violation of 1NF even though it is not a repeating group in the sense that Codd intended.

This latter sense of a so-called repeating group is not technically a violation of 1NF if each attribute is only single-valued. The attributes themselves do not contain repeating values and therefore there is no violation of 1NF for that reason. Such a design is often considered an anti-pattern however because it constrains the table to a predetermined fixed number of values (maximum N children in a family) and because it forces queries and other business logic to be repeated for each of the columns. In other words it violates the "DRY" principle of design. Because it is generally considered poor design it suits database designers and sometimes even teachers to refer to repeated columns of this kind as a "repeating group" and a violation of the spirit of the First Normal Form.

This informal usage of terminology is slightly unfortunate because it can be a little arbitrary and confusing (when does a set of columns actually constitute a repetition?) and also because it is a distraction from a more fundamental issue, namely the Null problem. All of the Normal Forms are concerned with relations that don't permit the possibility of nulls. If a table permits a null in any column then it doesn't meet the requirements of a relation schema satisfying 1NF. In the case of our Families table, if the Child columns permit nulls (to represent families who have fewer than N children) then the Families table doesn't satisfy 1NF. The possibility of nulls is often forgotten or ignored in normalization exercises but the avoidance of unnecessary nullable columns is one very good reason for avoiding repeating sets of columns, whether or not you call them "repeating groups".

the value English is repeating again and again. Is this a repeating group?

If SUBJECT_MODULE is rows where "[SUBJECT_NAME] has [MODULE_NAME] identified by [MODULE_ID]" and a subject might have more than one module then somewhere you must have multiple mentions of that subject (perhaps via its name) with mentions of different modules (perhaps by name or id). That would not involve redundancy.

The redundancy in this example from your question's second "this" link is not that Adam appears in two rows or that Adam appears with 15 in two rows. It is that if the table is rows where "[Student] is [Age] years old and takes [Subject]" then Student (eg Adam) can appear in multiple rows but always appears with the same Age (eg 15). But if the table were rows where "[Student] has a friend [Age] years old in [Subject]" then the table could be fully normalized already.

Sure it gets rid of the repeating value, but I am not sure if this is the right thing.

It does for your example data, but it might not for other example data. You haven't told us enough. (Anyway as I said above the multiple appearances might not even need normalizing.)

Whether there are any normalization-relevant redundancies in SUBJECT_MODULE or even whether there are any valid decompositions including the one you gave depends on the usual information necessary to normalize to above 1NF. Namely whether some of its columns are functions of others (functional dependencies) and whether its rows are also those where "..." AND "..." (join dependencies).

I have read different tutorials and seen different examples of normalization, specially the notion of "repeating groups" in the first normal form.

See this answer re "atomicity".

Not the answer you're looking for? Browse other questions tagged database database-design database-normalization or ask your own question.

1
1NF: Repeating Groups, what are they?
287
What are database normal forms and can you give examples?
9
What is atomicity in dbms
3
Multiple boolean attributes vs. New table
1
How to handle this type of Oracle SQL issue
2
Database design. One-to-many or Many-to-many?
0
When does repeating data get removed: before/after normalization?
1
Elegant normalization without adding fields, extra table. Best relationship
0
Which of these definitions explain 1NF?
0
When creating a table, is it possible to declare multiple columns to have the same type without repeatedly mentioning the type?
See more linked questions

4964
What is the difference between "INNER JOIN" and "OUTER JOIN"?
326
What does character set and collation mean exactly?
13
DB Design: 1st Normal Form and Repeating Groups
262
What does ON [PRIMARY] mean?
1435
What are the options for storing hierarchical data in a relational database?
3
Normalization UNF to 1NF