Is it possible to have a class have more than one superclass?

I am creating an incredibly primitive blackjack game for my high school programming class using Swing, therefore, all my resource classes extend JPanel. I created the following resource classes:

I want to do this so I can track the values of everybody's hands and determine winners and losers. I had a lightbulb go off and thought that making the Dealerbox a superclass to Clubs, Spades, and Hearts was the solution to all my troubles as I could have simple code in the superclass getting values for the above integers and do all the checking I need.

So I wrote this for one of my subclasses:

Now we get to the main question: Is it possible to have a class that has two superclasses? If so, how do I code it? If not, is there a way around the restriction?

I have a new problem. I used the method that everyone suggested which was to make DealerBox extend JPanel then to have everything else extend DealerBox. My GUI went from this: 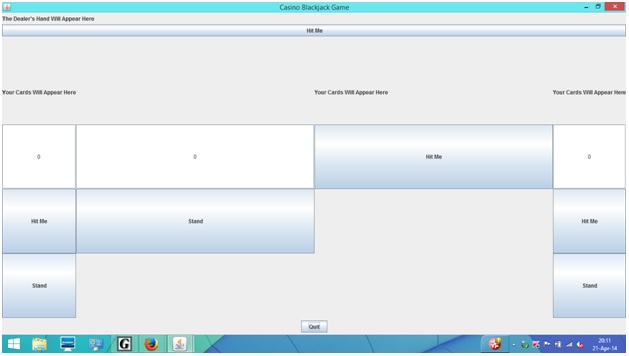 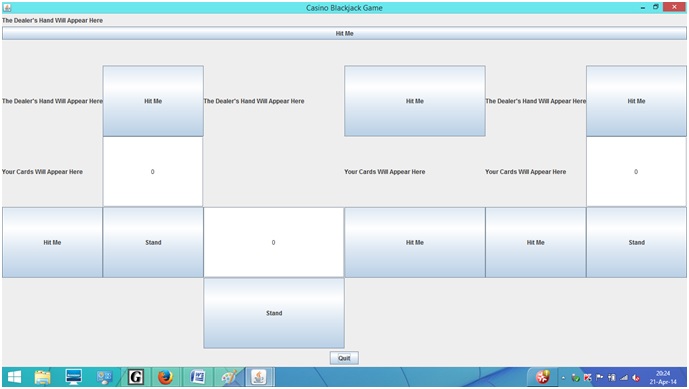 The bottom one is clearly incredibly screwed up. Somehow labels from other areas ended up being copied and stuff got mixed around. If you need the code let me know, but I need serious help fixing this.

Please keep in mind the inheritance tree looks like this: 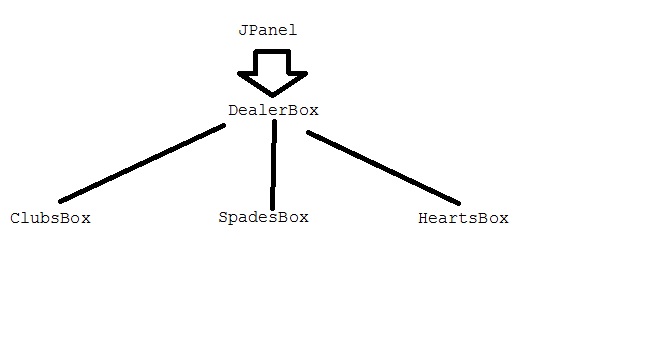 Have you ever found yourself wanting to write something similar to:

Here, Person is a concrete class that represents a person, while Employment is another concrete class that represents the details of a person who is employed. If you could only put them together, you would have everything necessary to define and implement an Employee class. Except in Java - you can't. Inheriting implementation from more than one superclass - multiple implementation inheritance - is not a feature of the language. Java allows a class to have a single superclass and no more.

One option to you is "Inheritance from Inheritance":

Unfortunately you can't have more than one direct superclass in Java. But you can chain them together like this:

Now with the new issue of your components not being laid out in the same manner as they were before, it's too hard to guess at what's going on without seeing some code. Are you putting common code into the constructor for DealerBox, and calling it from each DealerBox subclass? Like so:

Multiple inheritance is not allowed in Java. So you cannot have two superclasses.

Classes in Java can only extend one class, your trying to extend two. They can; however, implement multiple interfaces.

You can have multiple inheritance though, something like this:

and so on and so forth, does this help?

In Java, a child class cannot have more than one parent class. But what you want is be achievable, you can create a package, have classes in that package. And in the package where your current class is, you have to import that package. But remember, you have to keep the 'public' as access specifier.

Not the answer you're looking for? Browse other questions tagged java swing inheritance subclass superclass or ask your own question.

158
Why is there no multiple inheritance in Java, but implementing multiple interfaces is allowed?
28
Extends JFrame vs. creating it inside the program

2822
How do I test a private function or a class that has private methods, fields or inner classes?
1821
Java inner class and static nested class
717
What are the rules for calling the superclass constructor?
1513
Why does Java have transient fields?
1267
'Must Override a Superclass Method' Errors after importing a project into Eclipse
1338
Python class inherits object
25060
Why is processing a sorted array faster than processing an unsorted array?
2789
Why is printing “B” dramatically slower than printing “#”?
0
C# How could a superclass return back 3 possible types without casting from the calling class