Modifying content width of the Sphinx theme 'Read the Docs'

I am using 'Read the Docs' Sphinx theme for my documentation. In the original theme, given below

the content or main layout width is designed to be mobile friendly. However, for my project I would like this to be a bit more wide. I do not know HTML and hence would appreciate if any one could give me some clues to increase the content (layout) width.

Another option is to create a stylesheet in source/_static with just the css you want, e.g.

Make sure the directory is referenced in source/conf.py - I believe by default there's a line to do this, i.e.

Then create a custom layout in source/_templates/layout.html and do something like this to include your stylesheet

Assuming you called your stylesheet style.css

In case someone is searching for a simpler answer... combining the ideas from https://samnicholls.net/2016/06/15/how-to-sphinx-readthedocs/ and the above suggestions, I found the easiest way of getting a custom window-width is the following:

First of all I must say, that during my sphinx quickstart I chose the option of separate folder for my sources and for my build.

1. Create a document for your styles:

2. Telling sphinx about it

Now we have to tell sphinx to spit this document inside build/_static/css, the same directory where is the stylesheet included in the Read The Documents theme. We do that adding the following line to conf.py:

Done. Now, if we build, we will have the RTD styles (theme.css), and our custom my_theme.css in the same directory, build/_static/css.

Now we are gonna tell sphinx to use our custom my_theme.css, instead of the RTD one. We do that adding this line in conf.py:

In our custom stylesheet, the first line should import the styles of theme.css with @import url("theme.css");.

And we are ready to start overwriting styles.

UPDATE: THERE IS AN EVEN SIMPLER WAY.

1. Put your customizations inside source/_static/css/my_theme.css.

In your custom stylesheet, the first line should import the styles of theme.css with @import url("theme.css");.

This way, you don't have to worry about messing up the default styles, if your custom stylesheet doesn't work, delete and start again.

2. Add the following line in conf.py:

The HTML option added in Sphinx 1.8.0b1 (released Sep 2018) simplifies the process. The recommendation in Read The Docs Documentation is adding custom css to the theme via the html_css_files option in conf.py.

Put the custom.css in the html static path folder (Default is _static folder).

The solutions here are somewhat hackish. If you want to include the style, and have a css override and have it work on RTD you will want something like this.

I have tested this myself and it appears to work locally and on RTD. Largely plagiarized from https://blog.deimos.fr/2014/10/02/sphinxdoc-and-readthedocs-theme-tricks-2/

For 'classic' Theme, The solution is as simple and as clean as :

Adapt the percentage to your taste.

Reference from sphinx: body_max_width (int or str): Maximal width of the document body. This can be an int, which is interpreted as pixels or a valid CSS dimension string such as ‘70em’ or ‘50%’. Use ‘none’ if you don’t want a width limit. Defaults may depend on the theme (often 800px).

That will be 90% width of your monitor.

To make the ReadTheDocs theme use the entire width of your screen you can modify the theme.css file, removing the max-width: 800px; property from the wy-nav-content class definition, like so: 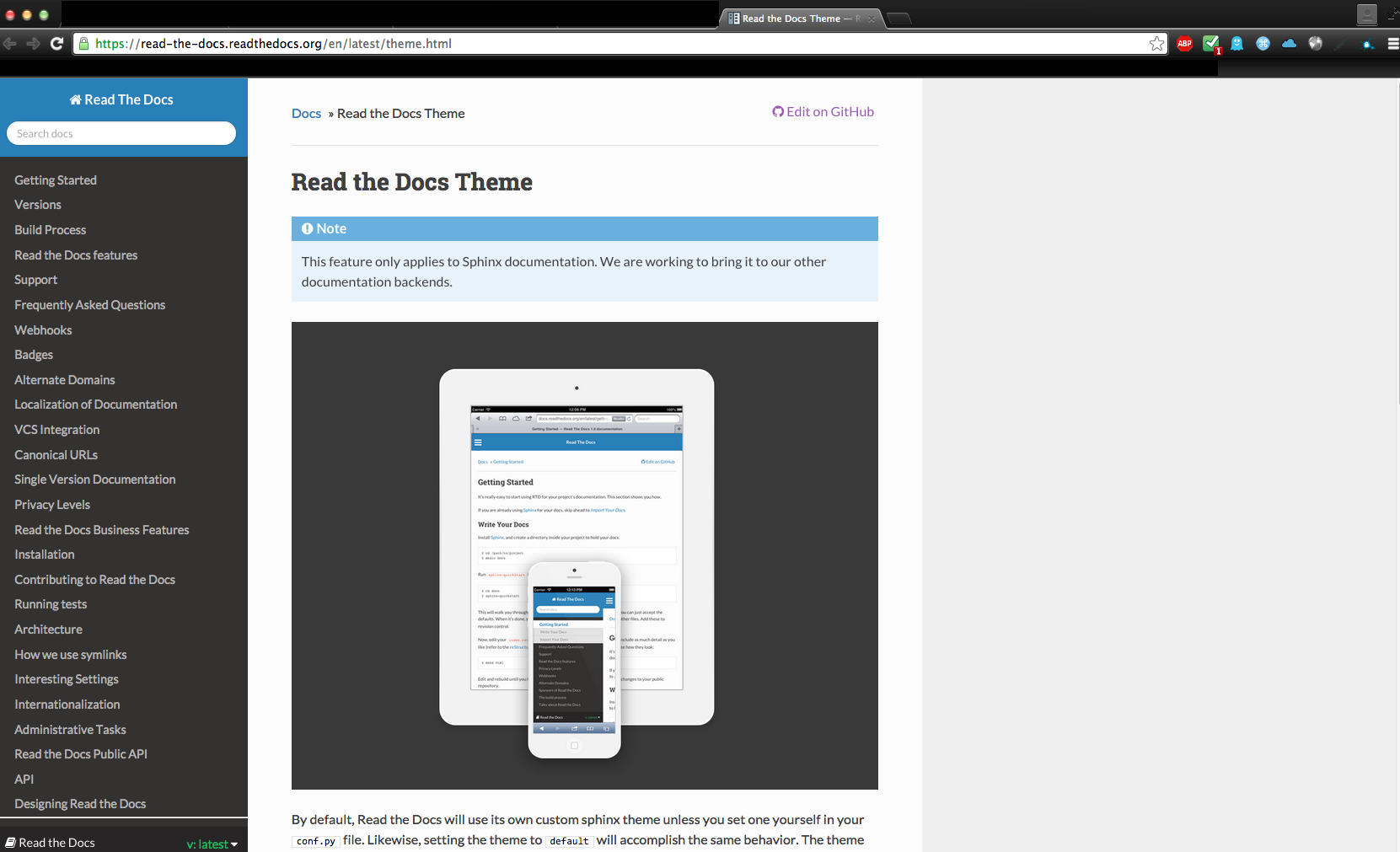 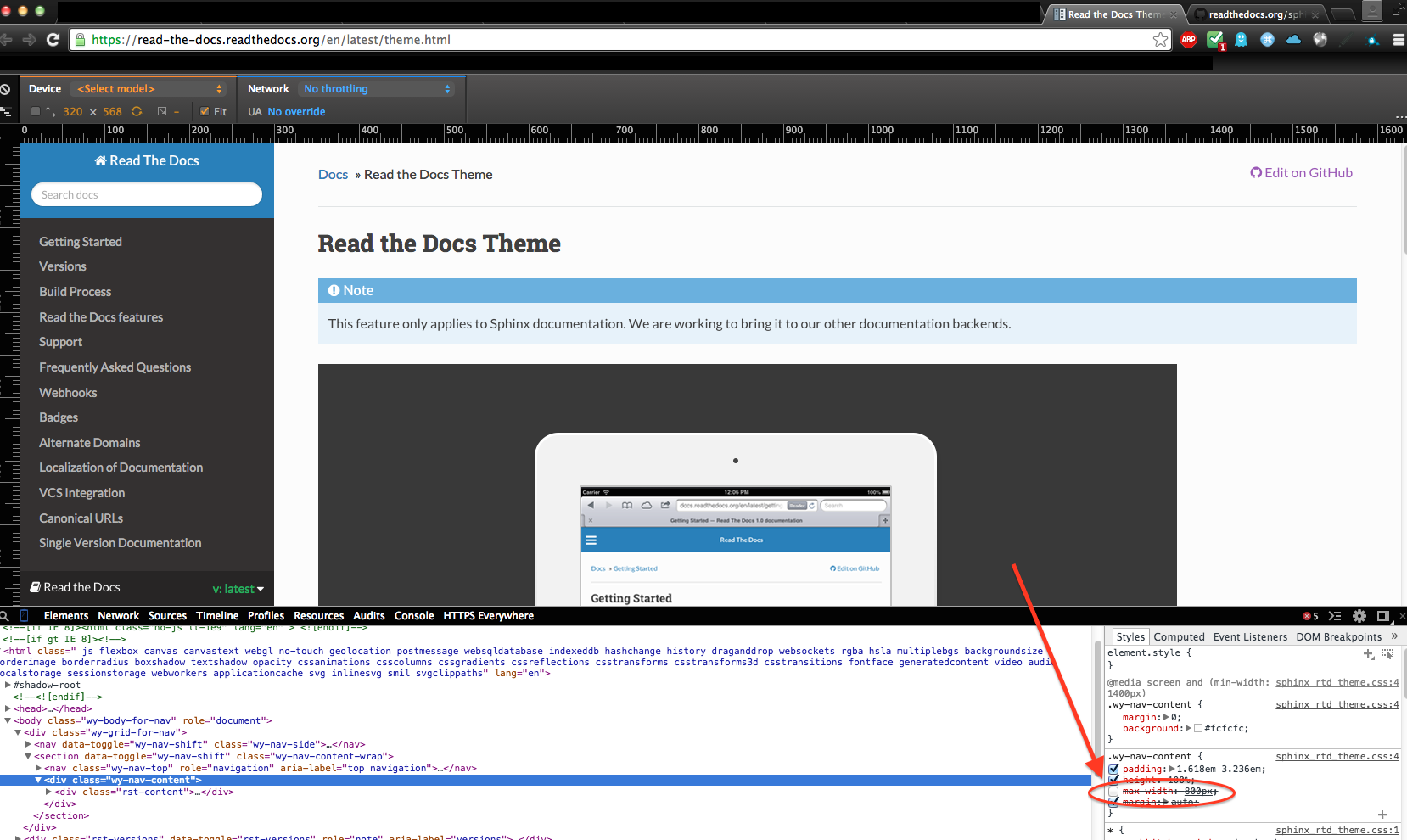 I would modify this in the css. You should search for the file theme.css (it is in the read-the-doc sources at "sphinx_rtd_theme/static/css/theme.css").

Make a copy of that file and put it in your sphinx _static dir. In that css file you can make all the layout changes that you need. (You might have to read a bit on css files if you have never worked with that.)

I found myself repeating this customization on multiple projects I've worked on (based on the great answers here, of course 😃 ).

So I made an extension just for that, the usage is as follows:

You can checkout the pypi page and the github repository.

Not the answer you're looking for? Browse other questions tagged html themes width python-sphinx or ask your own question.

15
How do I set up custom styles for reStructuredText, Sphinx, ReadTheDocs, etc.?
4
How to create a horizontal line and white space between function signatures in Sphinx autodoc
1
Don't Display Read the Docs Sphinx TOC in Narrow Windows
0
Modifying content width of Jupyter book, or the Sphinx theme sphinx-book-theme

1349
How to align content of a div to the bottom
0
640px or 1080px Width for Mobile Theme Design?
20
Change the colors of the Sphinx Read The Docs theme?
417
Change the Theme in Jupyter Notebook?
0
ReadTheDocs Theme folderstructure using Sphinx
3
Read the docs search broken
3
How to use custom CSS on a default Sphinx theme?
1
Don't Display Read the Docs Sphinx TOC in Narrow Windows
0
Docutils dependecy of Sphinx theme on readthedocs