My problem is that code::blocks error message tells me that it can't find file executable in the search path for gnc gcc compiler. Although, I don't know what that means. Also I typed out some code:

I can't build it or run in code::blocks. What do I need to do?

I went on line but I got some answers that are way over my head. I was able to use code::blocks once before I installed Visual studios express 2013. Visual studios didn't work right either. It kept asking me to repair or uninstall every time I tried to open it. So I deleted it along with code::blocks. Now that I re-installed code::blocks I still can't get to work right.

This problem with compilers is taking up all my time and I can't practice learning programming because I can't get any compiler to work right. I need some help, please.

I'm guessing you've installed Code::Blocks but not installed or set up GCC yet. I'm assuming you're on Windows, based on your comments about Visual Studio; if you're on a different platform, the steps for setting up GCC should be similar but not identical.

First you'll need to download GCC. There are lots and lots of different builds; personally, I use the 64-bit build of TDM-GCC. The setup for this might be a bit more complex than you'd care for, so you can go for the 32-bit version or just grab a preconfigured Code::Blocks/TDM-GCC setup here.

Once your setup is done, go ahead and launch Code::Blocks. You don't need to create a project or write any code yet; we're just here to set stuff up or double-check your setup, depending on how you opted to install GCC.

Go into the Settings menu, then select Global compiler settings in the sidebar, and select the Toolchain executables tab. Make sure the Compiler's installation directory textbox matches the folder you installed GCC into. For me, this is C:\TDM-GCC-64. Your path will vary, and this is completely fine; just make sure the path in the textbox is the same as the path you installed to. Pay careful attention to the warning note Code::Blocks shows: this folder must have a bin subfolder which will contain all the relevant GCC executables. If you look into the folder the textbox shows and there isn't a bin subfolder there, you probably have the wrong installation folder specified.

Now, in that same Toolchain executables screen, go through the individual Program Files boxes one by one and verify that the filenames shown in each are correct. You'll want some variation of the following:

Again, note that all of these files are in the bin subfolder of the folder shown in the Compiler installation folder box - if you can't find these files, you probably have the wrong folder specified. It's okay if the filenames aren't a perfect match, though; different GCC builds might have differently prefixed filenames, as you can see from my setup.

Once you're done with all that, go ahead and click OK. You can restart Code::Blocks if you'd like, just to confirm the changes will stick even if there's a crash (I've had occasional glitches where Code::Blocks will crash and forget any settings changed since the last launch).

Now, you should be all set. Go ahead and try your little section of code again. You'll want int main(void) to be int main(), but everything else looks good. Try building and running it and see what happens. It should run successfully.

Just open your setting->compiler and click on the reset defaults and it will start work.

* How to Download and install CodeBlocks.* ( I have already downloaded )

***How to solve the CodeBlocks environment error.

I had also found this error but I have solved this problem by easy steps. If you want to solve this problem follow these steps:

Step 2: Go to menu bar and click on the Setting menu

Step 4: Now, a pop up window will be opened. In this window, select "GNU GCC COMPILER" 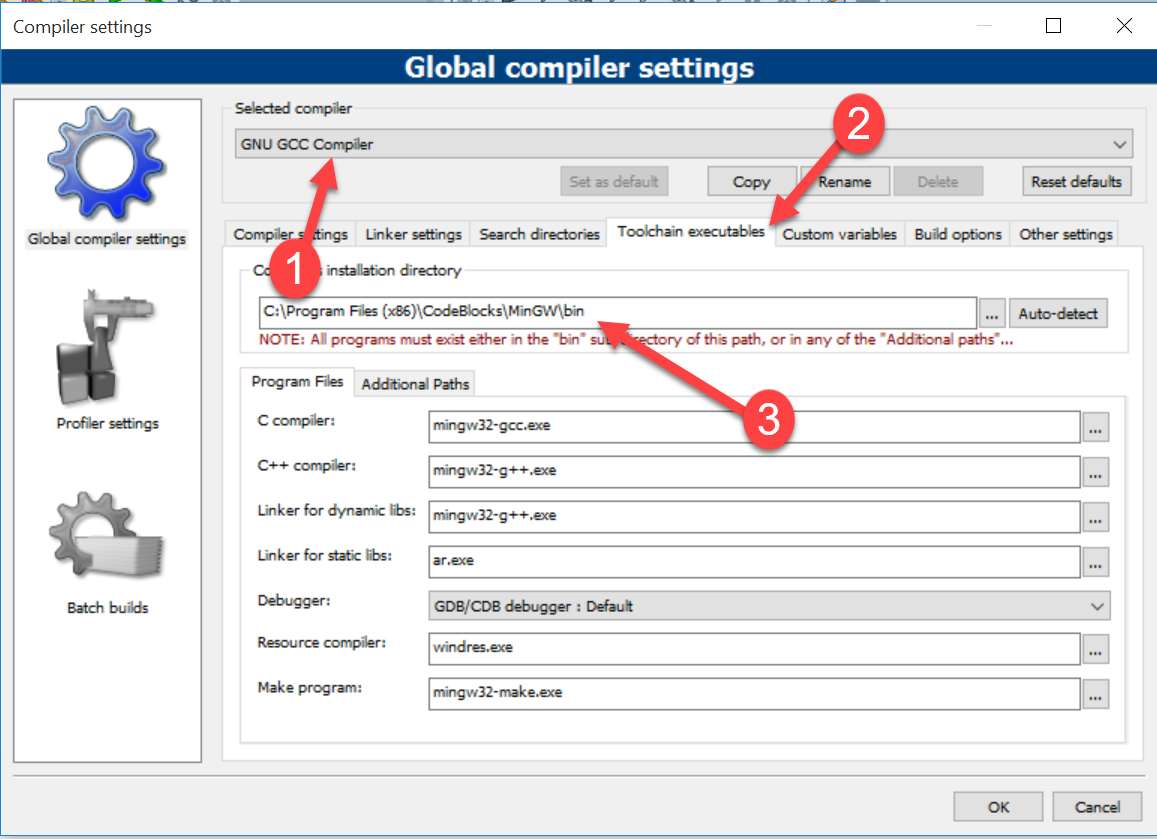 Now you can remove this error by follow these steps. Sometimes you don't need to select bin folder. You need to select only (C:\Program Files (x86)\CodeBlocks\MinGW) this path but some system doesn't work this path. That's why you have to select path from C:/ to bin folder.

For that you need to install binary of GNU GCC compiler, which comes with MinGW package. You can download MinGW( and put it under C:/ ) and later you have to download gnu -c, c++ related Binaries, so select required package and install them(in the MinGW ). Then in the Code::Blocks, go to Setting, Compiler, ToolChain Executable. In that you will find Path, there set C:/MinGW. Then mentioned error will be vanished.

Fistly, Code Blocks is not a compiler. It is just an integrated development environment.

So, you must show the path of your compiler at first, (if you dont have a compiler you have to download an install, it is not difficult to find. f.e. GCC is good one.) If code blocks could not find automatically the path of compiler it is an obligation to show it yourself.

But when you install, probably Code Blocks automatically find your compiler.

This simple in below solution worked for me. http://forums.codeblocks.org/index.php?topic=17336.0

I had a similar problem. Please note I'm a total n00b in C++ and IDE's but heres what I did (after some research) So of course I downloaded the version that came with the compiler and it didn't work. Heres what I did: 1) go to settings in the upper part 2) click compiler 3) choose reset to defaults.

I'm a total noob but I reinstalled over the codeblocks giving me these "Can't find file executable in your configured search path for gnc gcc compiler" errors by downloading:

(IMPORTANT: make sure it has the "mingw" in the file download name, that has the compiler build that is required to compile the code which doesn't automatically comes with the main codeblocks editor software download because codeblocks already assumes you already have another compiler installed on your computer {visual studio 2019 or such}).

Then when I created a new project (console application) and used the defaults to quickly test it out.

It gave me errors.

Should work! If not, look for the "MingGW" in the C:\Program Files\CodeBlocks and select it.

Not the answer you're looking for? Browse other questions tagged gcc codeblocks or ask your own question.

335
How to add a default include path for GCC in Linux?
4
what determines what bytes are output from std::endl
10
Why can't gcc deduce templated size for array argument? (C++11)
4
For identical c++ source file, its gcc executable is 655 times bigger in Windows than in Linux. Why this much difference?
116
Is it intended by the C++ standards committee that in C++11 unordered_map destroys what it inserts?
0
GCC using old version of C++
141
Is using an outdated C compiler a security risk?
0
Can't find file executable in your configured search path for INTEL C++ compiler (Linux)
1
Codeblocks succeeded in compiling, but gcc failes, Why?
0
Can't find compiler executable in your configured search path for gnu gcc compiler in Ubuntu