Anyone here that can help me understand how this works?

But your O(N^2) algorithm is faster for N < 100 in real life. There are a lot of reasons why it can be faster. Maybe due to better memory allocation or other "non-algorithmic" effects. Maybe O(N*log(N)) algorithm requires some data preparation phase or O(N^2) iterations are shorter. Anyway, Big-O notation is only appropriate in case of large enough Ns.

If you want to demonstrate why one algorithm is faster for small Ns, you can measure execution time of 1 iteration and constant overhead for both algorithms, then use them to correct theoretical plot: 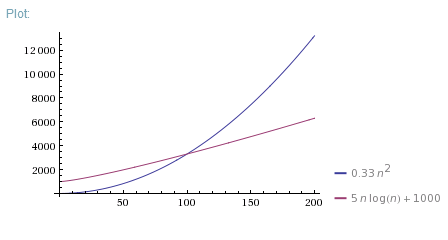 Or just measure execution time of both algorithms for different Ns and plot empirical data.

Just ask wolframalpha if you have doubts.

In this case, it says

Or you can also calculate the limit yourself:

That means n^2 grows faster, so n log(n) is smaller (better), when n is high enough.

Big-O notation is a notation of asymptotic complexity. This means it calculates the complexity when N is arbitrarily large.

So, for small Ns, just measure the two and see which one is faster. No need to go into asymptotic complexity.

On one hand we have:

On the other hand we have:

Putting them side to side:

Let's divide by n which is a common term, to get:

Let us start by clarifying what is Big O notation in the current context. From (source) one can read:

Big O notation is a mathematical notation that describes the limiting behavior of a function when the argument tends towards a particular value or infinity. (..) In computer science, big O notation is used to classify algorithms according to how their run time or space requirements grow as the input size grows.

Big O notation does not represent a function but rather a set of functions with a certain asymptotic upper-bound; as one can read from source:

Informally, in computer-science time-complexity and space-complexity theories, one can think of the Big O notation as a categorization of algorithms with a certain worst-case scenario concerning time and space, respectively. For instance, O(n):

An algorithm is said to take linear time/space, or O(n) time/space, if its time/space complexity is O(n). Informally, this means that the running time/space increases at most linearly with the size of the input (source).

An algorithm is said to run in quasilinear time/space if T(n) = O(n log^k n) for some positive constant k; linearithmic time/space is the case k = 1 (source).

is not accurate, since as mentioned before Big O notation represents a set of functions. Hence, more accurate would have been "does O(n log n) contains O(n^2)". Nonetheless, typically such relaxed phrasing is normally used to quantify (for the worst-case scenario) how a set of algorithms behaves compared with another set of algorithms regarding the increase of their input sizes. To compare two classes of algorithms (e.g., O(n log n) and O(n^2)) instead of

you should analyze how both classes of algorithms behaves with the increase of their input size (i.e., n) for the worse-case scenario; analyzing n when it tends to the infinity 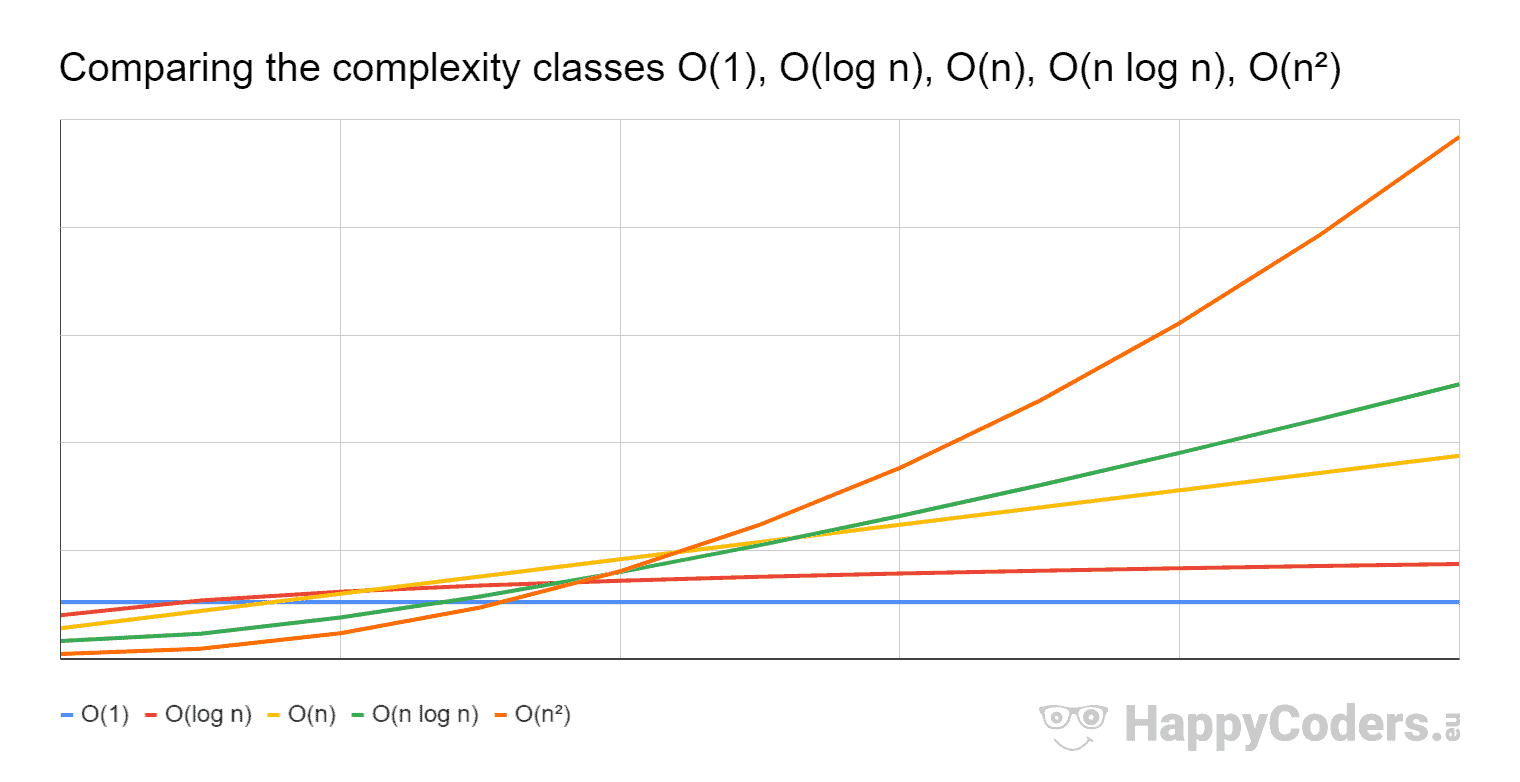 As @cem rightly point it out, in the image "big-O denote one of the asymptotically least upper-bounds of the plotted functions, and does not refer to the sets O(f(n))"

As you can see in the image after a certain input, O(n log n) (green line) grows slower than O(n^2) (orange line). That is why (for the worst-case) O(n log n) is more desirable than O(n^2) because one can increase the input size, and the growth rate will increase slower with the former than with the latter.

First, it is not quite correct to compare asymptotic complexity mixed with N constraint. I.E., I can state:

Also I'd like to mention that O(N * log2N) which I assume logariphm on basis 2 (log2N) is actually the same as O(N * log(N)) because of logariphm properties.

I am a mathematician so i will try to explain why n^2 is faster than nlogn for small values of n , with a simple limit , while n-->0 :

Not the answer you're looking for? Browse other questions tagged algorithm time-complexity big-o complexity-theory or ask your own question.

205
What exactly does big Ө notation represent?
2
Javascript re-index array based on index of another
0
Are O(n log n) algorithms always better than all O(n^2) algorithms?

556
What is the most efficient/elegant way to parse a flat table into a tree?
560
What algorithms compute directions from point A to point B on a map?
385
How to find list of possible words from a letter matrix [Boggle Solver]
2538
What does O(log n) mean exactly?
1244
Easy interview question got harder: given numbers 1..100, find the missing number(s) given exactly k are missing
1184
Ukkonen's suffix tree algorithm in plain English
1824
Image Processing: Algorithm Improvement for 'Coca-Cola Can' Recognition
1014
How can I find the time complexity of an algorithm?
4100
How can I pair socks from a pile efficiently?