I am currently reading Async Javascript by Trevor Burnham. This has been a great book so far.

He talks about this snippet and console.log being 'async' in the Safari and Chrome console. Unfortunately I can't replicate this. Here is the code:

If this was async, I would anticipate the outcome to be the books outcome. console.log() is put in the event queue until all code is executed, then it is ran and it would have the bar property.

It appears though it is running synchronously.

Am I running this code wrong? Is console.log actually async?

console.log is not standardized, so the behavior is rather undefined, and can be changed easily from release to release of the developer tools. Your book is likely to be outdated, as might my answer soon.

To our code, it does not make any difference whether console.log is async or not, it does not provide any kind of callback or so; and the values you pass are always referenced and computed at the time you call the function.

We don't really know what happens then (OK, we could, since Firebug, Chrome Devtools and Opera Dragonfly are all open source). The console will need to store the logged values somewhere, and it will display them on the screen. The rendering will happen asynchronously for sure (being throttled to rate-limit updates), as will future interactions with the logged objects in the console (like expanding object properties).

So the console might either clone (serialize) the mutable objects that you did log, or it will store references to them. The first one doesn't work well with deep/large objects. Also, at least the initial rendering in the console will probably show the "current" state of the object, i.e. the one when it got logged - in your example you see Object {}.

However, when you expand the object to inspect its properties further, it is likely that the console will have only stored a reference to your object and its properties, and displaying them now will then show their current (already mutated) state. If you click on the +, you should be able to see the bar property in your example.

Here's a screenshot that was posted in the bug report to explain their "fix": 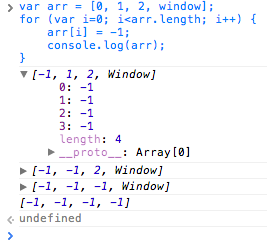 So, some values might be referenced long after they have been logged, and the evaluation of these is rather lazy ("when needed"). The most famous example of this discrepancy is handled in the question Is Chrome's JavaScript console lazy about evaluating arrays?

A workaround is to make sure to log serialized snapshots of your objects always, e.g. by doing console.log(JSON.stringify(obj)). This will work for non-circular and rather small objects only, though. See also How can I change the default behavior of console.log in Safari?.

The better solution is to use breakpoints for debugging, where the execution completely stops and you can inspect the current values at each point. Use logging only with serialisable and immutable data.

This isn't really an answer to the question, but it might be handy to someone who stumbled on this post, and it was too long to put in a comment:

This creates a pseudo-synchronous version of console.log, but with the same caveats as mentioned in the accepted answer.

Since it seems like, at the moment, most browsers' console.log's are asynchronous in some manner, you may want to use a function like this in certain scenarios.

in the first situation the object is simple enough, so console can 'stringify' it then present to you; but in the other situations, a is too 'complicated' to 'stringify' so console will show you the in memory object instead, and yes, when you look at it b has already be attached to a.

123
Weird behavior with objects & console.log
4
Javascript object both has properties and is empty
2
Converting Nodelist to Array and appending new class to each Node
2
Console.log outputting data from later code
2
When creating a variable in a JavaScript object, how does the code know where to add the new variable?
2
Why my long decimal number is showing as "NaN" in javascript
3
Why is the property of an object not being changed?
1
javascript console.log(obj) showing existing property 'context' and console.log(obj.context) shows undefined
1
Js Object - Getting the Value
1
Array with 2 different lengths?
See more linked questions

742
How would I run an async Task<T> method synchronously?
1372
How can I get the full object in Node.js's console.log(), rather than '[Object]'?
761
Script Tag - async & defer
663
async/await - when to return a Task vs void?
1367
How and when to use ‘async’ and ‘await’
883
Why do we need middleware for async flow in Redux?
805
Call async/await functions in parallel
2795
Using async/await with a forEach loop
6
Call Async Method from Session_Start
868
Syntax for an async arrow function