How to add a subview that has its own UIViewController in Objective-C?

I am struggling with subviews that have their own UIViewControllers. I have a UIViewController with a view (light pink) and two buttons on a toolbar. I want blue view to display when the first button is pressed and the yellow view to display with the second button is pressed. Should be easy if I just wanted to display a view. But the blue view will contain a table, so it needs it's own controller. That was my first lesson. I started off with this SO question where I learned I needed a controller for the table. 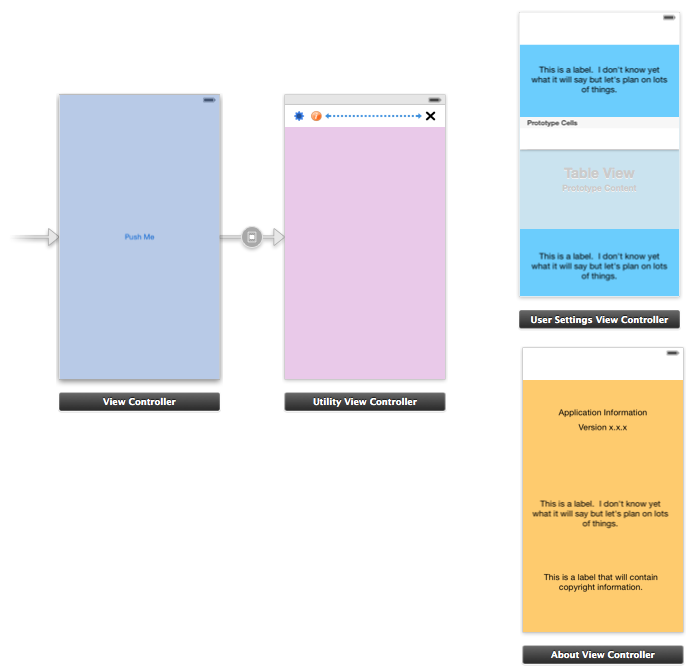 I'm trying to use addChildViewController. From what I have seen, there are two ways to do this: The Container View in the storyboard or addChildViewController programmatically. I want to do it programmatically. I don't want to use a NavigationController or a Tab bar. I just want to add the controllers and shove the correct view into the pink view when the associated button is pressed.

This code is not intended to do anything other than display the blue view in viewDidLoad.

The self.aboutVC.aboutView is nil. But I wired it up in the storyboard. Do I still need to instantiate it?

This post dates from the early days of modern iOS. It is updated with current information and the current Swift syntax.

In iOS today "everything is a container view". It is the basic way you make apps today.

An app may be so simple that it has just the one screen. But even in that case, each "thing" on the screen is a container view.

2020. These days you usually just load a container view from a separate storyboard, which is dead easy. It's explained at the bottom of this post. If you are new to container views, maybe familiarize with the 'classic style' ('same storyboard') container tutorial first.

(A) Drag a container view in to your scene...

Drag a container view into your scene view. (Just as you would drag in any element such as a UIButton.)

The container view is the brown thing in this image. It is actually inside your scene view. 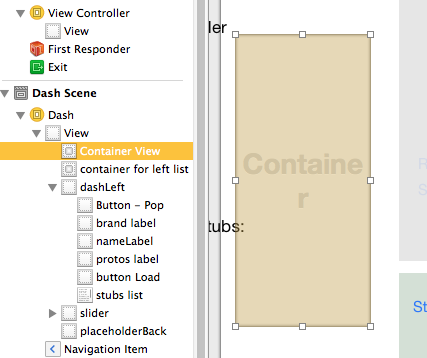 When you drag a container view into your scene view, Xcode automatically gives you two things:

The two are connected with the "Masonic Symbol Thing" - explained below!

(B) Click on that new view controller. (So that's the new thing Xcode made for you somewhere on the white area, not the thing inside your scene.) ... and, change the class!

It's really that simple.

Notice the container view at (A).

Notice the controller at (B). 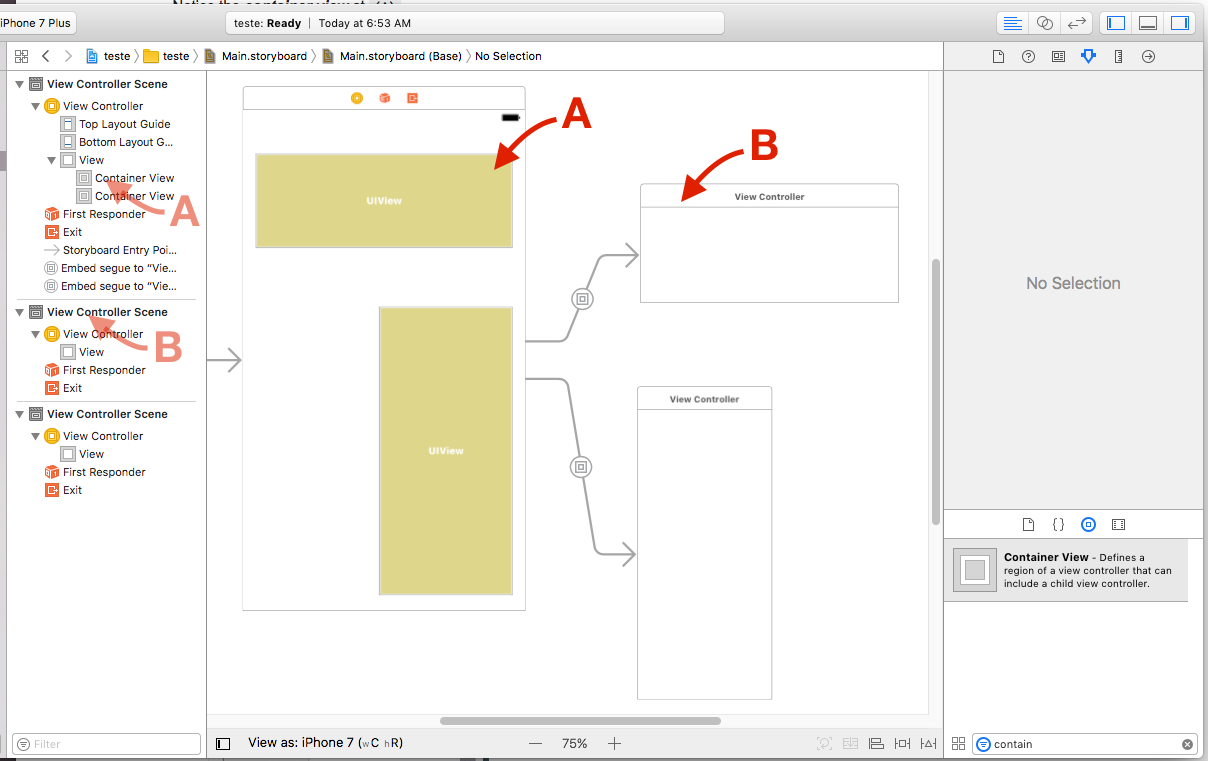 Go to the inspector at the top right. Notice it says "UIViewController"

Change it to your own custom class, which is a UIViewController.

So, I have a Swift class Snap which is a UIViewController.

So where it says "UIViewController" in the Inspector I typed in "Snap".

(As usual, Xcode will auto-complete "Snap" as you start typing "Snap...".)

That's all there is to it - you're done.

How to change the container view - say, to a table view.

So when you click to add a container view, Apple automatically gives you a linked view controller, sitting on the storyboard.

Currently (2019) it happens to make it a UIViewController by default.

That's silly: it should ask which type you need. For example, often you need a table view.

Here's how to change it to something different:

(i) Drag a container view in to your scene. Look at the UIViewController on the storyboard which Xcode gives you by default.

(ii) Drag a new UICollectionViewController to anywhere on the main white area of the storyboard.

(iv) Click the "x" to actually delete that Triggered Segue.

(v) DRAG from that Triggered Segue (viewDidLoad is the only choice). Drag across the storyboard to your new UICollectionViewController. Let go and a pop-up appears. You must select embed.

(vi) Simply delete all of the unwanted UIViewController. You're done.

You will have one of these "square in a square" Masonic symbol things: it is on the "bendy line" connecting your container view with the view controller.

The "masonic symbol" thing is the segue. 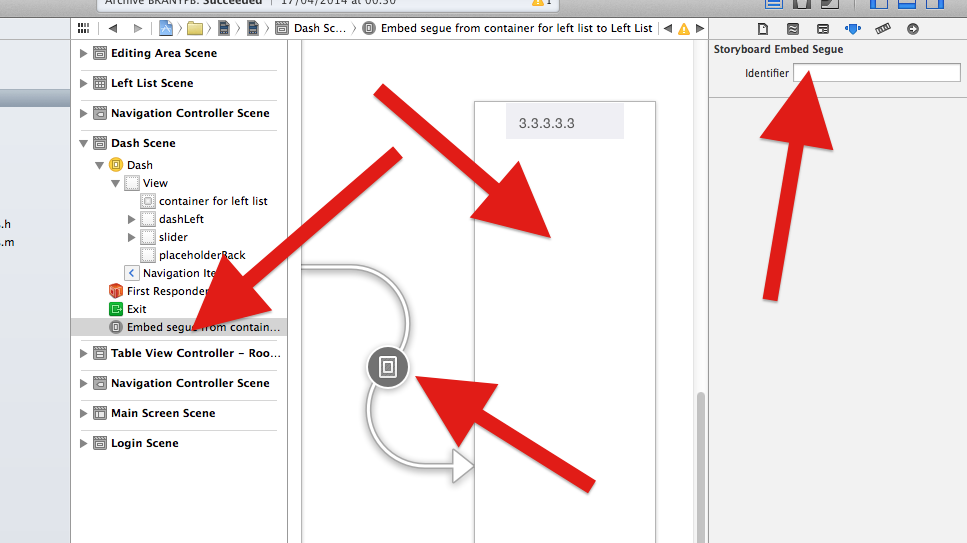 Select the segue by clicking on the "masonic symbol" thing.

Look to your right.

You MUST type in a text identifier for the segue.

You decide on the name. It can be any text string. A good choice is often "segueClassName".

Next, where do you use that text identifier?

How to connect 'to' the child controller...

Then, do the following, in code, in the ViewController of the whole scene.

Let's say you have three container views in the scene. Each container view holds a different controller, say "Snap", "Clock" and "Other".

It's that simple. You connect a variable to refer to the controllers, using the prepareForSegue call.

How to connect in the 'other direction', up to the parent...

Say you're "in" the controller which you have put in a container view ("Snap" in the example).

It can be a confusing to get to the "boss" view controller above you ("Dash" in the example). Fortunately, it is this simple:

Critical: Only works from viewDidAppear or later. Will not work in viewDidLoad.

Important: that only works for container views.

Tip, don't forget, that only works for container views.

These days with storyboard identifiers, it's commonplace to just pop new views on the screen (rather as in Android development). So, let's say the user wants to edit something...

When using a container view, IT IS GUARANTEED that Dash will be the parent view controller of Snap.

However that is NOT NECESSARILY THE CASE when you use instantiateViewController.

Very confusingly, in iOS the parent view controller is not related to the class which instantiated it. (It might be the same, but usually it is not the same.) The self.parent pattern is only for container views.

(For a similar result in the instantiateViewController pattern, you have to use a protocol and a delegate, remembering that the delegate will be a weak link.)

Note though that these days it's pretty easy to dynamically load a container view from another storyboard - see last section below. It's often the best way.

It's worth noting that "prepareForSegue" is a really bad name!

"prepareForSegue" is used for two purposes: loading container views, and, segueing between scenes.

But in practice, you very rarely segue between scenes! Whereas almost every app has many, many, container views as a matter of course.

It would make more sense if "prepareForSegue" was called something like "loadingContainerView".

A common situation is: You have a small area on the screen, where you want to show one of a number of different view controllers. For example, one of four widgets.

The simplest way to do this: just have four different container views all sitting inside the same identical area. In your code, simply hide all four and turn on the one you want visible.

... dynamically load a Storyboard in to a container view.

Say you have a storyboard file "Map.storyboard", storyboard ID is "MapID", and the storyboard is a view controller for your Map class.

Have an ordinary UIView in your main scene:

And to remove that container view:

Note however in that example, the dynamicContainerView is simply a fixed view. It does not change or resize. This would only work if your app never rotates or anything else. Usually, you would have to add the four usual constraints to simply keep the map.view inside dynamicContainerView, as it resizes. In fact, here is the "world's handiest extension" which one needs in any iOS app,

Thus, in any real app the code above would be:

(Some folks even make an extension .addSubviewAndBindEdgesToSuperview() to avoid a line of code there!)

A reminder that the order must be

Removing one of those?

You've added map dynamically to the holder, now you want to remove it. The correct and only order is:

Often you will have a holder view, and you want to swap different controllers in and out. So:

I see two problems. First, since you're making the controllers in the storyboard, you should be instantiating them with instantiateViewControllerWithIdentifier:, not initWithNibName:bundle:. Second, when you add the view as a subview, you should give it a frame. So,

Not the answer you're looking for? Browse other questions tagged objective-c uitableview uiviewcontroller uicontainerview or ask your own question.

8439
Why does HTML think “chucknorris” is a color?
1477
Passing data between view controllers
117
IBOutlet is nil, but it is connected in storyboard, Swift
209
Access Container View Controller from Parent iOS
127
How to use single storyboard uiviewcontroller for multiple subclass
120
How do I create a custom iOS view class and instantiate multiple copies of it (in IB)?
112
How to load a xib file in a UIView
99
Correct way to load a Nib for a UIView subclass
75
How to add an UIViewController's view as subview
93
iOS Nested View Controllers view inside UIViewController's view?
See more linked questions