Java - Can final variables be initialized in static initialization block?

Based on my understanding of the Java language, static variables can be initialized in static initialization block.

However, when I try to implement this in practice (static variables that are final too), I get the error shown in the screenshot below: 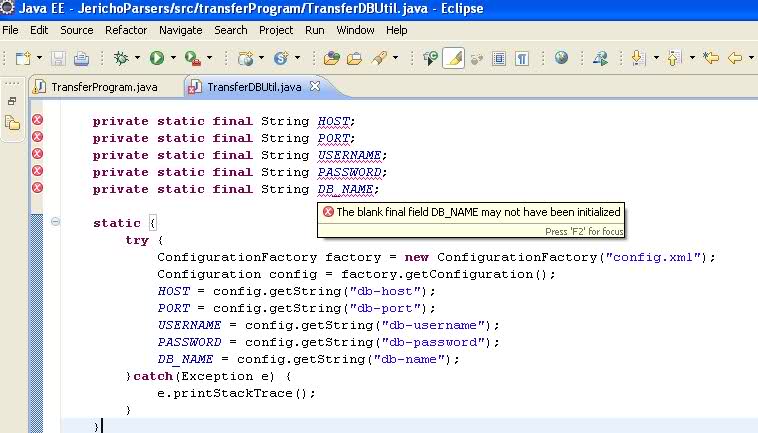 Yes of course: static final variables can be initialized in a static block but.... you have implicit GOTOs in that example (try/catch is essentially a 'GOTO catch if something bad happens').

If an exception is thrown your final variables will not be initialized.

Note that the use of static constructs goes against Object-Oriented dogma. It may complicate your testing and make debugging more difficult.

You can do this but you need to exit the static block by throwing an exception - you can rethrow the exception that was caught or a new one. Generally this exception must be a RuntimeException. You really should not catch a generic Exception but more specific exception(s) that might be thrown from within your try block. Finally, if a static initializer throws an exception then it will render the class unusable during that specific run because the JVM will only attempt to initialize your class once. Subsequent attempts to use this class will result in another exception, such as NoClassDefFoundError.

So, to work, your initializer should read something like this:

Assuming that InitializationFailedException is a custom RuntimeException, but you could use an existing one.

Assuming no where upstream is in a position to catch either an ExceptionInInitializationError or a general Exception then the program should not ever try to use myVar. If however those are caught and the program doesn't end, then you need to code to watch for and handle myVar being null (or be happy with NullPointerExceptions coming out all over).

I'm not sure there is a good way to handle this.

Can you put the declaration in the finally block?

Not the answer you're looking for? Browse other questions tagged java static final or ask your own question.

2547
Does a finally block always get executed in Java?
2210
Are static class variables possible in Python?
1900
Java inner class and static nested class
867
Efficiency of Java "Double Brace Initialization"?
258
Should a "static final Logger" be declared in UPPER-CASE?
1915
Comparing Java enum members: == or equals()?
3484
How can I create a memory leak in Java?
1349
How to directly initialize a HashMap (in a literal way)?
674
Why are static variables considered evil?
511
How does the "final" keyword in Java work? (I can still modify an object.)