This Web API's GET-methods should be called from an Android app. In this link it's explained I should use 10.0.2.2 on the Android Emulator to get the computer's 127.0.0.1.

When I did this, it didn't work for my HttpRequest in the Android app. So I went to the Android browser and typed it directly, and it also didn't work.

Then I tried using 127.0.0.1 instead of localhost in my computer's browser, and for some unknown reason it also doesn't work.. Is there a different between localhost and 127.0.0.1? I always thought they were one and the same.

And with localhost everything works fine.

So, my question: How can I use localhost on the Emulator (or, how can I fix the error I get when using 127.0.0.1 instead of localhost)? Also, I would like to know the difference between localhost and 127.0.0.1, since I always thought they were the same.

Thanks in advance for the responses.

In this stackoverflow question they mention the host file in System32 of Windows. I opened this file with Notepad++ (as Administrator) and uncommented the lines with 127.0.0.1 localhost and ::1 localhost. But unfortunally this didn't fixed the problem and I still can't use 127.0.0.1 on my computer as a replacement for localhost. Probably because my problem is the reversed (I can access localhost, but not 127.0.0.1, instead of the other way around.)

In this stackoverflow answer it's explained that the differences between localhost and 127.0.0.1 are:

All and all I kinda understand the differences now, I just don't get why my localhost is working, but 127.0.0.1 isn't..

Does it have to do something with the port (I use 54408 as port)? I've opened cmd and did the following tests:

Still no one with an idea on how to fix this?

Copy of my hosts-file, located in C:\Windows\System32\drivers\etc.

The last two lines used to be:

This was a great step in the right direction, since 127.0.0.1:54408 homepage now works. However, once I try to log in with the Google OAuth on the C# website, I was getting the following error: 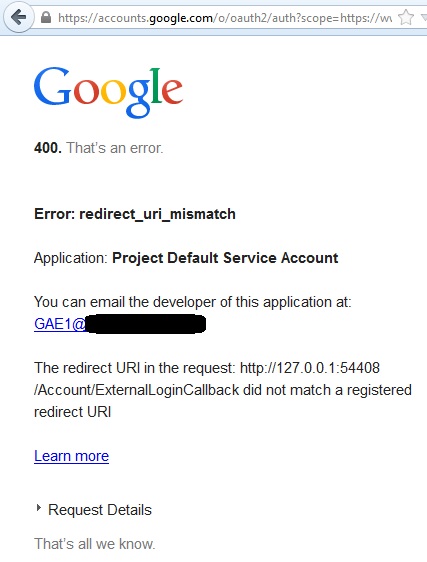 One of my ex-colleagues who worked on the C# web project told me once about this stackoverflow post. In the answer of this post is stated that I should add the redirect-urls (in my case 127.0.0.1) to the Google APIs Console. Right now I don't have access to this Console for my localhost project however, since it's obtained through SVN. I will ask to one of my supervisors for permission to view the Google APIs Console of this C# web project and perhaps edit the redirect-urls to include 127.0.0.1.

Once I've got it completely working I'll accept Jake C's answer, since his explanation of the Http port configurations did indeed help me find the answer.

Once again thanks Jake C for your suggestion to change the http port configurations in Visual Studio. This did the trick for me.

So typically an HTTP 400 Invalid Hostname error usually means you do not have the website set accept all hostnames and/or IP addresses. I presume because this is a C# application you are hosting this on IIS. To fix this open up IIS Manager (Win+R and enter inetmgr), expand the server then Sites, then right-click on the the website where your application is hosted and select bindings. In this list there should be an http binding for port 54408, double-click on this. Under IP address make sure All Unassigned is selected, and under Host name make sure the field is blank. Hit OK, then Close. The setting should take effect immediately without needing to reset IIS.

If you are only testing this through Visual Studio's built in web deployment, there are similar settings to the above somewhere in VS (I'm a little rusty on it so I can't remember exactly where or how). Alternatively you can set up a web site in IIS exactly how you want it and then have VS deploy to that website instead of using its own internal server. I think there might be some debugging drawbacks to doing it this way though (once again I'm a little fuzzy on details, I'll edit them in when I remember them or figure it out).

A little background as to why these settings exist: Sometimes a server needs to host multiple sites that are all to be accessed via port 80. So lets say we have foo.com and bar.com and they are too small to warrant getting a separate server for both of them. So instead they are both hosted on a sever with an IP address of 1.2.3.4. Now when you enter the URL foo.com into the browser and hit go, it first resolves the host name to 1.2.3.4, and then it creates a request and part of that request is called the host header. The host header is filled with the hostname of the URL entered, in this case foo.com. When the request is received by the server, it looks at the host header and serves back the content for foo.com.

Now if you were to try and enter 1.2.3.4 into the browser, it would create a request with a blank host header, because none was specified. When the request is received by the server, it doesn't know what to do because there are two websites being hosted by the server and there is no host header to specify which one the browser is looking for, so instead it returns an error.

This is probably what is happening in your situation. Your website is being hosted under the localhost hostname and any other request isn't being responded to. The settings I specified to change are basically telling the server that no matter what IP address (network interface) it comes in on, and no matter what the hostname it is looking for, as long as it is coming in on port 54408, serve this website.

If you are using Visual Studio's built in web server (IIS Express), localhost is mapped by default; to enable 127.0.0.1:

5) Change this entry to:

Note: You will want to repeat this process any time you create a new virtual directory (changing the port number Project/Properties/Web/Project Url), which creates a new entry in the applicationhost.config file.

then go to your solution path and open ".vs" dirctory (directory is hidden) and open "applicationhost.config"

and stop all running project on IIS Express and restart them.

I know it's a bit old post. But my solution could help someone at least a few minutes time. If you have more than one bindings on the website you are running delete it. Have have only one with IP address: All Unassigned and HostName set to Blank 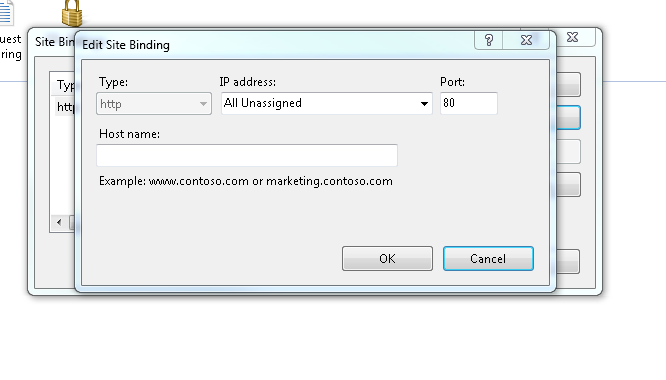 It's probably not an Android nor Windows issue. If you run your localhost by Visual Studio you will not get it available via 127.0.0.1

Instead try to set IIS at your computer, then deploy from Visual Studio to IIS

Some peoples managed to use tunneling, but I never tried it and have no clue what to recommend.

Just something which listening to 127.0.0.1 and redirecting data from-to it and localhost

Go into the folder .vs/config and open applicationhost.config and change

This worked form me On visual Studio >= 2017, for dotnet core projects:

1- Edit applicationhost.config located inside .vs\config in your project and add bindings for 127.0.0.1 for http and https:

2- edit iisexpress launch settings in vs: from solution explorer under the api project tree

Not the answer you're looking for? Browse other questions tagged c# android asp.net-web-api android-emulator localhost or ask your own question.

334
The breakpoint will not currently be hit. No symbols have been loaded for this document in a Silverlight application
290
Error “The connection to adb is down, and a severe error has occurred.”
427
Could not load file or assembly … An attempt was made to load a program with an incorrect format (System.BadImageFormatException)
495
ReSharper “Cannot resolve symbol” even when project builds
253
Specified argument was out of the range of valid values. Parameter name: site
1449
Why not inherit from List<T>?
258
No EditorOptionDefinition Export Found Error
130
How to use C# 6 with Web Site project type?
784
Error retrieving parent for item: No resource found that matches the given name after upgrading to AppCompat v23