What do the commands on this cake do?

To celebrate my 3 month probation as a web developer concluding, I'm going to make a terminal cake for the office. In my research on the subject I came across this photo, and was wondering what the commands do? 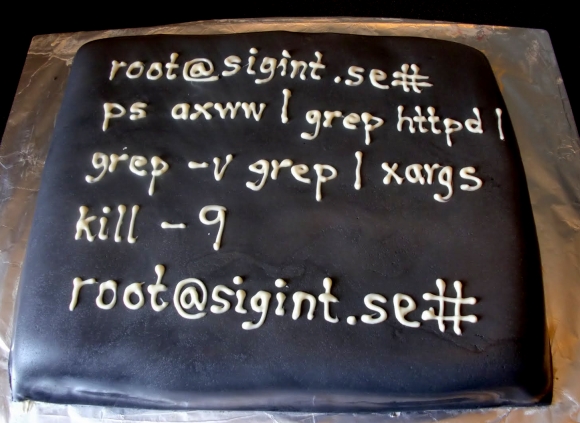 That pipeline tries to stop all of the Apache processes on the system, in a rather heavy-handed Rube Goldbergian fashion.

It would be a lot better to use pgrep here, if it's available:

Not only is the command shorter, it does what you actually want, reliably. It doesn't match and then filter out grep processes, it only matches on the process name, and it doesn't pass non-PID junk to kill.

Systems with pgrep often also have the command pkill, which wraps up that pipeline into a single command:

You can add -9 here to forcibly terminate httpd processes if you want, but I will leave it off from here on. I've ordered these commands to be increasingly discriminate, so it also makes sense to make them decreasingly brutal, if you will.

If your system doesn't have pgrep or pkill, it may have pidof:

Yet another method is to use killall:

Beware, the killall command may do something different on non-Linux OSes.

The safest method is to use your OS's normal "stop the web server" command, however. Examples:

That command will only stop Apache proper, however. The OS-specific commands above may do other cleanup actions as well. If Apache was started by the OS, you should use the OS's own command to stop it, too.

This is a cake-protection command. This command unables a Root to eat the cake, because after this angry users will call the Root, open trouble tickets, etc. :)